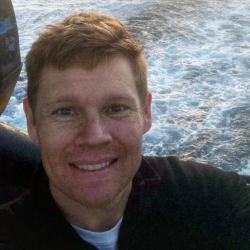 Andy has worked in support of the NEFSC since 2016, first as an analyst for the Fisheries Sampling Branch and recently as a fisheries biologist for the Cooperative Research Branch. Prior to starting with CRB he worked for three years at the NEFSC's Fisheries Sampling Branch as a data analyst, where he was involved in developing the video-based electronic monitoring program.

Growing up in California to a family of avid sailors, he has always spent time in or around the water. He moved to Ithaca New York to pursue a degree in Natural Resources at Cornell University (2006). After college he worked for NOAA's Southwest Fisheries Science Center in Santa Cruz, CA before moving to Yale University for his PhD (2015) and then to Woods Hole Oceanographic Institution for a brief postdoc (2016). In his free time he enjoys just being outdoors and tries to spend as much of his time running and going to the beach as he can.