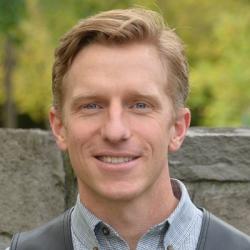 Before coming to NEFSC, Garth served as Forest Supervisor of the Caribou-Targhee National Forest. Previously he worked at the Gifford-Pinchot National Forest in Washington. Garth completed his Bachelor of Science degree at the United States Naval Academy in 1995 after which he served as a Naval Flight Officer for eight years. He received his Master's Degree in Urban and Regional Planning from the University of Hawaii in 2003.

After his military service, Garth sought to continue his public service in an environmental arena. He began his career with the Forest Service in Washington D.C. after being awarded a Presidential Management Fellowship. Having grown up loving the outdoors, he has also dedicated much of his time as a Forest Service leader establishing community coalitions around reconnecting youth with nature.

Garth is married to Julie Fitzpatrick, and they have three daughters (twin eight-year olds and a six-year old). When Garth is not learning to take care of nine new additions to the family — two horses, six chickens, and a dog — he enjoys exercising, re-teaching himself piano, and trying to keep up with his three daughters.