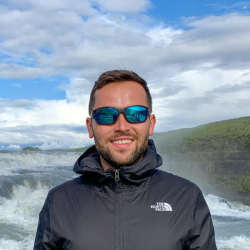 Jack Reynolds has a B.S. in Marine Science from the University of Maine and is currently working towards a M.S. in Ocean Food Systems from the University of New England. Jack became an observer following his undergraduate program in 2017 and was homeported in Gloucester and New Bedford, MA. After a year and a half of full-time observing Jack took on a role of an Area Coordinator with A.I.S. Inc. During the pandemic Jack found the time to train as a Protected Species Observer and traveled along the entire east coast working on various marine construction projects. During his off time Jack enjoys spending time outdoors exploring New England's rich and rocky coastline. Jack is interested in exploring marine spatial management and aquaculture lease zones as future career goals.