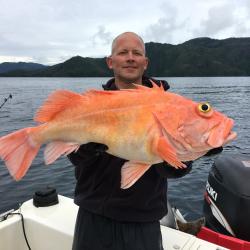 John grew up in Homer, Alaska and longlined, seined, gillnetted his way through undergraduate and graduate school.  He received a Bachelor of Science in Fisheries from Oregon State University in 1996 and was at the OSU College of Oceanic and Atmospheric Science between 1996 and 1998.  John returned to Alaska and worked for the Alaska Department of Fish & Game – Habitat Division for a couple of years before moving to NOAA Fisheries - Anchorage Field Office in 2000.  Since then, he has been involved with issues focused on the Essential Fish Habitat provision of the Magnuson-Stevens Fishery Conservation and Management Act and the effects of commercial fishing activities on benthic habitat.  He has worked closely with the Alaska Fishery Science Center on  deep water coral and sponge science, ecosystem management, and species distribution modeling, the commercial fishing industry on conservation engineering and fishing effects, and the North Pacific Fisheries Management Council on marine protected areas, GIS and spatial analysis.  He is currently working on a masters degree at Alaska Pacific University, focusing on the effects of fishing activity on corals and sponges in the Aleutian Islands.

He spends his free time with his wife and three children, being outfished by his kids during the summer in Prince William Sound but making up for it by beating most of them down the mountains during ski race season.