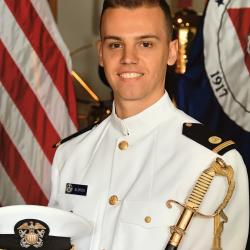 LTJG Tyler Aldrich is a Mashpee, Massachusetts native who graduated from the Massachusetts Maritime Academy in June 2017 with Bachelor of Science in Marine Safety and Environmental Protection. As a cadet he spent much of his time volunteering for the Buzzards Bay Coalition and Coastal America Foundation. Upon graduation, LTJG Aldrich completed Basic Officer Training Class 131 at the United States Coast Guard Academy and received his commission into the NOAA Commissioned Officer Corps in May 2018. He reported to his first sea assignment aboard the NOAA Ship Thomas Jefferson in June 2018 where he later acquired qualifications as Officer of the Deck In-Port, At-Anchor, and Underway as well as Unlimited Coxswain of Small Boats. His ancillary duties included Damage Control, Navigation, Property Contact, MWR, amongst others.