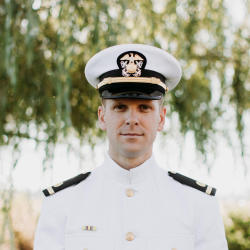 Before joining the NOAA Corps in July 2017, Lieutenant (junior grade) Robbins was a boat captain and educator with the Chesapeake Bay Foundation’s Baltimore Harbor Environmental Education Program. In addition, Ian was an Associate Professor of Biology at Notre Dame Maryland University. During the winter, he also worked at the Patuxent National Wildlife Research Center, assisting with animal care for the Atlantic Seaduck Project.

Ian graduated from the University of Maryland in 2009 with a B.A. in Economics and History, and completed his graduate work at the Johns Hopkins University Advanced Academic Programs, earning his M.S. in Environmental Science and Policy in 2017. He served in the Peace Corps as an economic development consultant, extending for a third year as a regional leader in Panama. After returning, Ian had the opportunity to work with NOAA scientists on restoration projects, and used NOAA fishery and buoy data for his graduate research. This led him to be interested in being part of an organization dedicated to scientific discovery, public service, and protecting the earth’s ocean and atmosphere.

His first assignment upon completion of Basic Officer Training with the NOAA Corps was as a Junior Officer on the NOAA Ship RAINIER (S-221). Ian was promoted from Ensign to Lieutenant (junior grade), earned his Officer of the Deck and Unlimited Launch Coxswain qualifications, and conducted survey operations in remote areas in Alaska, Hawaii, and much of the West Coast.

LTJG Robbins is currently the Vessel Operations Coordinator at the Milford Lab and Officer in Charge of the Research Vessel VICTOR LOOSANOFF. His primary responsibilities are the safe operation and maintenance of the lab’s vessels. This work includes planning and leading operations in conjunction with scientists and technicians, safety training with the crew, coordinating dive operations, and maintaining certificates, inspections, and licenses.