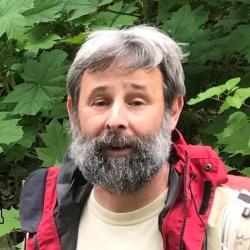 Sean works in the Alaska Region’s hydropower program evaluating the volume and timing of flows needed to provide spawning and juvenile rearing habitat for salmon below proposed dams. His duties have expanded to include evaluating the effects of transboundary mines, dock upgrades and road development on essential fish habitat. Sean received a B.S. in Forestry from the University of California, Berkeley in 1990. After volunteering with the Peace Corps in Haiti, and several years restoring streams in Yosemite National Park, he completed an M.S. in Hydrologic Science at the University of California, Davis in 1998.  He spent the next seven years establishing the Kings River Experimental Watershed for the U.S. Forest Service in the Sierra Nevada. A hydrologist position in Yellowstone N.P. drew him back to the National Park Service and he followed that with work in Lassen Volcanic N.P., Bryce Canyon N.P., and the National Park of America Samoa. As the Chief of Resources, he led a staff who protected the U.S.’s most diverse coral reefs, removed invasive species from tropical forests, and preserved cultural resources.