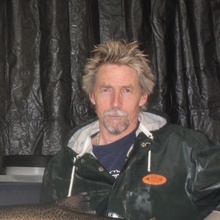 Carlin has been a fisheries biologist at the Northwest Fisheries Science Center’s Manchester Research Station since 1991. He received a B.A. in Zoology from the University of Washington in 1973 and was then employed as a fish culturist for 17 years with Domsea Farms, a private aquaculture company that pioneered salmon net pen culture in Puget Sound. While with Domsea he helped establish a captive broodstock program for coho salmon in 1977 that is still viable 35 years later. This led to his hire at the Manchester Research Station in 1991 to assist with the establishment of a captive broodstock program for endangered Redfish Lake sockeye.

Carlin’s focus since 1991 has been aiding in recovery of threatened or endangered Pacific salmon through establishment of captive broodstock programs in cooperation with state and tribal entities. These programs include Redfish Lake sockeye from Idaho, Snake River spring Chinook from Idaho and Oregon, Puget Sound spring and fall Chinook from Washington, and Elwha River Odd Year Pink salmon from Washington. One has to love this type of work and have great patience, as the Redfish Lake sockeye program is currently in its 21st year of effort.