An interview with Dr. Clay Porch, the NOAA Fisheries scientist who chaired the assessment for the Western stock of Atlantic bluefin tuna.

Atlantic bluefin tuna are one of the most valuable fish in the sea. They are prized for the high-quality sushi and sashimi produced from their flesh, and it’s not uncommon for individual fish to fetch prices of $10,000 or more. Their high value makes them hard to resist, and overfishing had sharply reduced their numbers. In recent years, however, international cooperation has reduced fishing pressure on Atlantic bluefin tuna, and the stocks appear to be recovering.

Because bluefin tuna live on the high seas, beyond the jurisdiction of any one nation, catch limits are set by the International Commission for the Conservation of Atlantic Tunas. ICCAT meets this week to negotiate new catch limits for both the Eastern and Western stocks, and recently completed stock assessments provide the scientific context for the negotiations.

What is the purpose of the stock assessment?

The main purpose of the assessment is to estimate how many Atlantic bluefin tuna are out there and how many fish we can take while still leaving enough in the ocean to sustain future catches.

What were the results of the assessment for the Western stock?

This is the most optimistic assessment we've had in years, although it’s important to recognize the uncertainties associated with it.

We started keeping track of the stock in the 1970s, and by the 1990s overfishing had reduced it to about one-fifth its former size. But the stock has been managed under a rebuilding program since 1998, and it now appears that the stock has been recovering steadily since then.

The assessment indicates that the stock is now back to roughly one-half the size it was in the 1970s. However, there is a lot of scientific uncertainty around that estimate, and the true numbers may be lower. So there's reason to be optimistic, but there’s also reason to be very cautious regarding the question of catch limits. 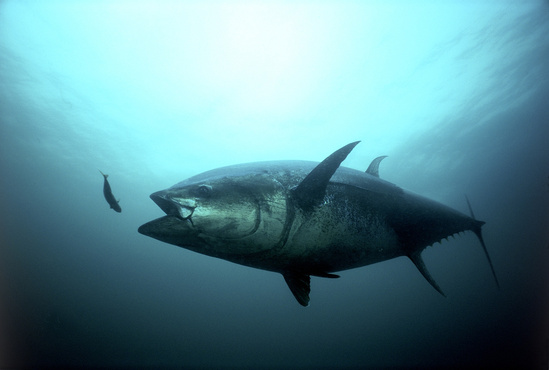 What are the major sources of uncertainty in the assessment?

The biggest uncertainty is the amount of mixing between the stocks. A large fraction of the Western catch is made up of Eastern fish that have migrated across the Atlantic. We haven’t had a reliable way to distinguish Eastern fish from Western fish, and certainly not in the historical data, so we don’t account for mixing in our stock assessment models.

The assessment is based primarily on catch data and other fishery statistics. The fishery information for Western bluefin tuna is fairly complete, in part because fewer countries fish for bluefin in the Western Atlantic—mainly the U.S., Canada, and Japan. In contrast, a much larger number of nations fish the Eastern stock—including most of the nations around the Mediterranean Sea—and many do not report all of the information needed. So for the Eastern stock, the best we can say is that the assessment is highly uncertain.

Is the Western stock rebuilt, or do we still have a long way to go?

The stock has recovered to about one-half the level it was when we started tracking the data in the 1970s. Whether or not the stock still has growth potential is a matter of debate.

If the number of young produced by the stock is about as high as it's going to get—insiders call this the "low recruitment scenario"—then the stock is no longer overfished. In that case, it may soon be time to raise catch limits and enjoy the fruits of a successful rebuilding program. On the other hand, if the reproductive potential of the stock can continue growing—that's the "high recruitment scenario"—then the stock is still overfished and the rebuilding program should continue so we have a larger, more valuable fishery in the future.

For the low recruitment scenario to be true, something must have changed to make bluefin tuna less productive than they were in the 1970s, such as a change in the environment.

That's possible, but we don't have much external evidence of this type of change. As of this assessment, scientists still don’t agree which scenario describes the true state of the stock. In fact, neither scenario is very well supported by the data, and the truth is probably somewhere in between.

What do you attribute the success of the rebuilding program to?

For the Western stock, the most important factor has been low catch quotas. We cut the quota, and the stock responded.

In the East, not only did they significantly cut the legal catch, they also cut back on illegal fishing. Along with other regulations they put in place, that reduced the take of Eastern bluefin tuna significantly, and it's clear that the stock responded quickly. But again, how fast it's responding is uncertain because we don't have very good data on that stock.

What are we doing to reduce uncertainty in the next assessment in 2016?

We've been funding a lot of research to collect age data. For instance, in recent years we've been collecting a large number of otoliths, which are ear bones that have annual rings, and you can count the rings to determine the age of the fish. That gives us better data on the age structure of the stock, which is an important factor in the assessment.

We're also doing a lot of tagging studies and genetic studies to better understand stock structure and the degree of mixing between the stocks. We’ve been collecting genetic samples, and we should soon be able to identify individual fish based on their genetic signature. That will allow us to do "genetic tagging," which involves less uncertainty than conventional tags.

We've also been funding an aerial survey in the Mediterranean Sea to get a direct index of biomass. That would arguably be the strongest fishery index we can hope for. But it's difficult to get permits to fly in the airspace of each coastal Mediterranean nation, especially off North Africa.

There are a lot of logistical problems when you're trying to survey a highly migratory species that doesn't pay attention to international borders. But we’re working hard to reduce uncertainty in next the assessment, including the uncertainty related to mixing.