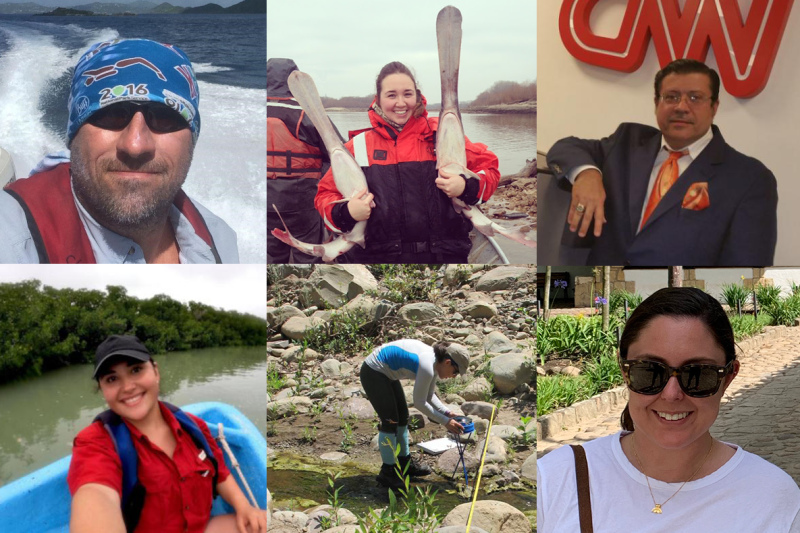 Join us in celebrating National Hispanic Heritage Month, which honors cultures and contributions of Hispanic and Latino Americans and the heritage of Latin American countries. Check out the profiles below to meet our colleagues across the country and learn how their work helps us to ensure sustainable fisheries, protect marine species, and conserve valuable habitat for future generations.

Zuzy Abdala is a Program Analyst based in Silver Spring, Maryland contracting for Earth Resources Technology, Inc. She currently works in the NOAA Restoration Center in the Office of Habitat Conservation, where she served as a Knauss Fellow in 2020. She first joined NOAA Fisheries as an intern for the Office of Science and Technology in 2019.

Zuzy has an undergraduate degree from George Mason University in general biology and a Master's degree in oceanography from Old Dominion University. She worked as an aquatic ecologist technician for the Illinois Natural History Survey near St. Louis, sampling the Mississippi River for sturgeon, paddlefish, and silver carp, among others. She also conducted research off the coast of the West Antarctic Peninsula for 5 weeks on the R/V Nathaniel B. Palmer in 2016. In 2017, she was awarded the 3-year National Science Foundation’s Graduate Research Fellowship.

Learn more about Zuzy Abdala and her work

Natalie Consentino-Manning has worked for NOAA’s Restoration Center for 20 years as a marine habitat restoration specialist. She works on restoring seagrass, kelp, rocky intertidal habitats that have been injured by oil spills and hazardous waste, and those that need extra help to make them healthy for fish. She coordinates with other federal and state agencies, local governments, universities, and non-profit organizations in her job. Natalie finds collaborating with so many people who want to improve our environment very rewarding.

She grew up exploring California  and spent two years at a junior college earning an Associate in Arts, then went on to undergraduate school at Humboldt State University. She earned a Bachelors in Environmental Science and Biology, with minors in botany and Spanish. Then she went on to earn a Masters in Environmental Science and Management at the University of San Francisco.

Learn more about Natalie Cosentino-Manning and her work

Andy Davis is the Pelagic Observer Program’s Safety Coordinator at the Southeast Fisheries Science Center. He also serves as the primary liaison with the highly migratory species pelagic longline fishing industry and he is in charge of procurement. He studied from elementary through high school in Brazil before attending college in the United States and then graduated from Grossmont College in California with an Associates Degree in General Studies.

Learn more about Andy Davis and his work

2021 IN FISH! student Robert Dellinger talks about his summer internship experience with our Northeast Fisheries Science Center and shares what National Hispanic Heritage Month means to him. Robert is originally from Highlands, New Jersey. He’s a student at the University of California, Davis, majoring in marine and coastal science and international relations. For Robert’s internship, he worked with mentors Chris Chambers, Tom Noji, and Ann Petersen to better understand the impacts of contaminants on white perch—a common fish found in the fresh and tidal waters along the U.S. East Coast.

Learn more about Robert Dellinger and his work

Elena Flores is a graduate scholar at the Southeast Fisheries Science Center. She is currently conducting shrimp experiments to evaluate a new tag used in shrimp. These visible marks will help monitor shrimp growth over time. She monitors retention rate, and visibility of the tags, as well as shrimp survival.

This monitoring happens mainly in coastal marshes, mangroves, and oyster reefs. Elena works with her lab group to perform other duties such as rehabilitating the wet lab facility, conducting field work, boat maintenance, and helping with other shrimp projects. With a Bachelors in Biology, she is currently working on her Masters degree in Ocean, Coastal, and Earth Sciences at the University of Texas Rio Grande Valley. Elena's thesis research is on coastal conservation investigating eutrophication effects on Black mangrove and soil gas fluxes in eutrophicated coastal blue carbon in South Texas.

Learn more about Elena Flores and her work

Anne grew up in Aracaju, Sergipe, located in the northeastern part of Brazil on the coast. The name of the town comes from Tupi-Guarani, the local indigenous language, and it means "the cashew tree of the parrots.” She earned her B.S. in Biology from UC San Diego after transferring from Chaffey Community College in Rancho Cucamonga, CA.

Learn more about Anne Freire and her work

Alejandra Mickle-Arce works as part of the Damage Assessment Remediation and Restoration Program  team at the NOAA Restoration Center, within the Office of Habitat Conservation. In this program, NOAA and teams of state, tribal, and federal agencies restore habitats after oil spills and hazardous waste releases. She serves primarily as the DARRP monitoring and evaluation coordinator where she engages and coordinates with staff on establishing consistent and cost‐effective approaches to monitoring and evaluation of habitat restoration projects. This work ultimately helps us document the extent to which the projects have produced the intended benefits to habitat.

Alejandra attended Florida State University for both undergrad and graduate school, graduating with a Bachelor’s of Science in Biology and a Master’s of Science in Biological Oceanography. She grew up on the Peruvian coast, and turned her love of the ocean into restoring coastal habitats here in the United States.

Learn more about Alejandra and her work

Martin Navarro is a Maintenance Mechanic for the Southwest Fisheries Science Center. This position covers fixing everything from lights in the parking lot, to putting together furniture in offices, to fixing plumbing issues or maintaining our seawater system, which supplies seawater to our experimental aquaria and Ocean Technology Development Tank. If anything happens in the building, he iscalled to respond and fix it, so every day it might be something different: electricity, plumbing, pumps or motors, or the grounds. Martin was born and raised in Cuidad Constitutión, in Baja California Sur, Mexico.

Martin went to high school in Mexico and studied in La Paz, Baja California. He started out as a marine mechanic in Baja, working on boats. But his dream was to do more and I started working for a contracting company that maintained buildings and grounds, including the NOAA building in La Jolla. Seven years later, after gaining his citizenship, he was hired as a federal employee.

Learn more about Martin Navarro and his work

Dr. Luis O. Noguerol is a cybersecurity gatekeeper and Judo blackbelt. He grew up in Holguin, Cuba. Today he chairs the cybersecurity operation for the Southeast Fisheries Science Center, where he develops and carries out new standards, policies, and cybersecurity processes. As the "gatekeeper," his main goal is to keep the Center's information secure while enabling staff the ability to securely meet the agency's critical mission and goals.

Learn more about Luis Noguerol and his work

She says the most interesting projects she has worked on are water-diversion projects because you often have to be incredibly strategic, creative, and thoughtful to gain water for endangered Southern California steelhead.

Learn more about Brittany Struck and her work

2021 IN FISH! student Matteo Torres talks about his summer internship experience with the Northeast Fisheries Science Center and University of Alaska, and shares what National Hispanic Heritage Month means to him.

Matteo is originally from Wilmington, California and he's currently a student at California State University, Long Beach, majoring in biology. For Matteo’s internship, he worked with mentors George Liles, director of the Academic Programs Office at the Northeast Fisheries Science Center, and Javier Fochesatto, Professor and Chair Department of Atmospheric Sciences at the University of Alaska Fairbanks, to better understand changes in snow precipitation rates in the Arctic.

Learn more about Matteo Torres and his work

Sara Young is part of a ten person team in the Office of Protected Resources who issue scientific research permits under the Marine Mammal Protection Act. Her area of focus is issuing research permits for pinnipeds—seals and sea lions. Since the age of five, she knew she wanted to be a marine biologist.

Learn more about Sara Young and her work

Last updated by Office of Communications on October 08, 2021