You’ve probably heard of a marine biologist, but did you know about marine chemists? Catch a glimpse into some of the amazing technology that chemists at the Northeast Fisheries Science Center have used to investigate marine environments. 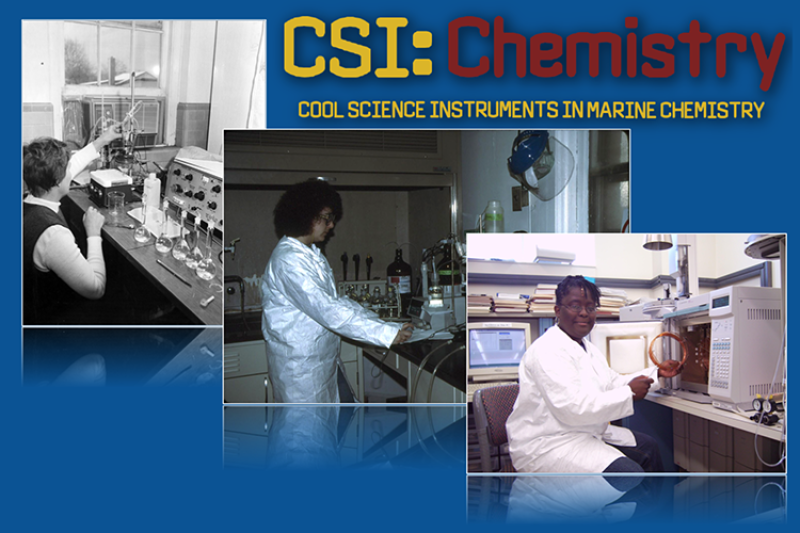 Our investigation begins with an early technique used to determine how much oxygen was present in samples of seawater. A Winkler Titration technique requires the careful addition of chemical compounds and strong acids to a seawater sample to measure the amount of dissolved oxygen in it. The amount of oxygen in seawater is a balance between oxygen produced through photosynthesis and that being consumed by fish and bacteria. Today we have electronic instruments that can measure dissolved oxygen without using a Winkler Titration technique. But we can’t forget the early techniques that led the way to today’s Cool Science Instruments.

In the 1980s and 1990s, instruments were becoming more and more advanced as the computer technology, microchip availability, and sensitivity of sensors increased. In this—and more recent—eras, various instruments were used to measure harmful contaminants that might be present in fish, or to determine a chemical fingerprint of a fish stock. This gave ecologists clues into migration patterns and population structures. These computerized instruments were more capable than humans when it came to distinguishing analytical results. Let’s continue our investigation into some of these Cool Science Instruments.

Ever wonder how scientists can identify what chemical components are present in a substance? Well, our scientists investigate the presence and quantities of harmful chemicals in samples of fish and other marine organisms using Cool Science Instruments such as the atomic absorption spectrometer and the high performance liquid chromatograph. Different atoms absorb and give off different wavelengths of light when they are excited. The spectrometer can measure the chemical makeup of a substance by comparing these wavelengths to a known library of values. These values tell the scientists what elements are present. The chromatography can separate a substance into its various chemical components by forcing the sample through an absorbent material under pressure. This instrument is a faster, newer generation of liquid chromatography and is used for removing lipids (fats) and other interfering compounds from the extracts of fish tissues containing organic contaminants such as polychlorinated biphenyls, called PCBs for short.

Find out more: What are PCBs?

The instruments that our scientists use to separate contaminants from fish tissues are becoming more advanced as time goes on, but some of them still have roots in the past. Soxhlets have been around since 1879. They are named for Franz von Soxhlet, the German agricultural chemist who invented the first one. They are used to extract compounds from a solid sample. Scientists still use the same technique, albeit with a more complex apparatus. Rather than a single Soxhlet extractor, they now use multiple extractors to process more samples at once. Unfortunately, this process can take many hours. A more modern instrument, seen on the right side of the panel, uses heat and pressure to extract organic contaminants in fish tissues and gets the job done in less time. Whether relying on proven century old techniques or using modern computerized technology, these extractors are definitely two Cool Science Instruments.

If you have ever watched any movies or television shows about police investigations, you have probably heard the words mass spectrometer. There’s a reason for that: It is a very useful instrument for identifying different compounds in a substance. At our science center, researchers use these instruments to learn about microplastics in marine environments, sea birds, sea turtles, fish, and dolphins. Unfortunately, the plastics from our daily lives have found their way into the marine environment and could cause problems for marine life and humans. These instruments rely on two techniques to identify the “usual suspects.” The gas chromatography separates a sample into its component parts and the mass spectrometer then analyzes and identifies each component. So the next time you are watching a show, and hear the words “mass spec,” you can tell your friends how marine chemists use these same instruments to investigate the ocean.

Learn More: What are microplastics?

Careful sample preparation is key to getting accurate results from any of the instruments in an analytical laboratory. Often this sample preparation involves using strong acids or dangerous chemicals. The scientists  who do this work are specially trained to handle these materials safely. One modern instrument that doesn’t require dangerous sample preparation is the direct mercury analyzer. Mercury is a naturally occurring metal that is liquid at room temperature and has been used in various industries for hundreds of years. Mercury is dangerous if eaten, and in some marine environments can be found in the bodies of fish and other marine organisms. This instrument allows marine chemists to investigate the levels of mercury in fish and work to protect us from its harmful effects. Samples are analyzed in less than 10 minutes.