On June 25, 2020 we received a report of a floating North Atlantic right whale carcass off the coast of Elberon, New Jersey. We will update this web page as more information becomes available. 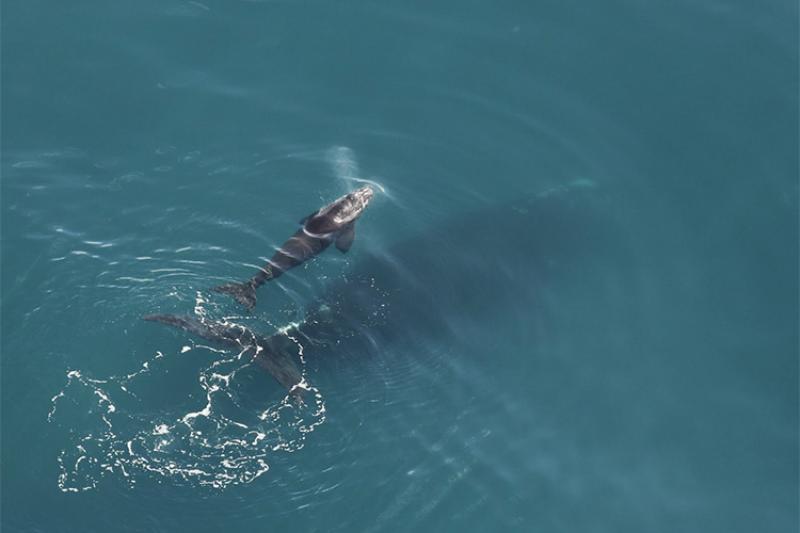 We are deeply saddened by the loss of the calf of North Atlantic Right whale #3560 and want to share the preliminary findings of yesterday’s necropsy.

The male right whale calf had evidence of at least two separate vessel collisions. The whale had several propeller wounds across the head and chest, and a likely skeg or rudder injury on the back that may have occurred at the same time. Based on observed evidence of healing, those wounds were likely several weeks old, but were serious enough that they may have significantly impaired the whale. The second vessel collision resulted in a series of propeller wounds and a skeg or rudder wound across the tail stock. Evaluation of these wounds suggests they were inflicted shortly before the animal died and were likely the cause of death.

“Our hearts are broken by the news of the loss of this calf, which was the first calf observed this past season. The loss of every right whale is a detriment to this endangered species, but it is particularly hard when we lose a calf, given how few have been born in the last several years. The effort to secure this calf in order to determine the cause of death was herculean with many twists and turns,” says Kim Damon-Randall, Deputy Regional Administrator for the Greater Atlantic Region. “We want to express our sincere appreciation to the many partners involved in this massive effort for your dedication and service towards the recovery of this endangered species. We are committed to continuing to work with our partners both in the United States and Canada to reduce threats to North Atlantic right whales in order to recover the species.”

NOAA Fisheries is looking at the issue of vessel strikes from various perspectives. We recently completed an assessment of the right whale vessel speed rule and will soon be releasing a report detailing the conservation effectiveness, economic impacts, navigational safety, and compliance with the rule. We are also exploring new ways to use technology such as providing acoustic information to alert vessel operators that right whales are present in an area. The Whale Alert app currently provides real-time alerts to vessel operators about the presence of whales. We work with partners to support this tool and are working to expand communication to vessels.

An Unusual Mortality Event (UME) was declared for North Atlantic right whales in 2017 and is ongoing. Over the past three years, 31 whales in Canada and the U.S. have been documented dead and an additional 10 have been documented alive but with serious injuries (41 whales total). Most of the mortalities or injuries have been attributed to either vessel strikes or entanglements. Given there are only ~400 individual North Atlantic right whales remaining, those 41 individuals in the UME represent approximately 10% of the population, which is a significant negative impact on such an endangered species.

Thanks to our partners involved in this event, we were able to gather important information that will aid in determining the most effective measures needed to recover this species. 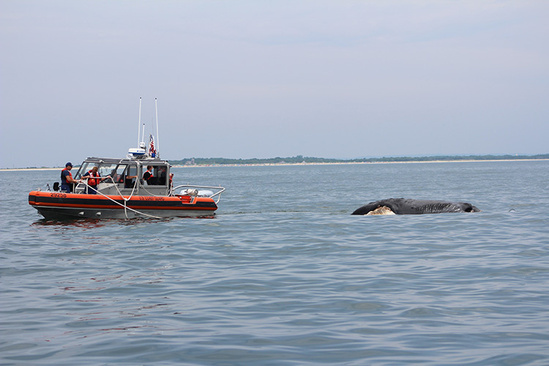 Through a joint effort between the New England Aquarium and the Florida Fish and Wildlife Conservation Commission, the dead whale has been identified as the male calf of North Atlantic right whale #3560 (unnamed). He was the first of ten reported calves of the 2019/20 season. North Atlantic right whale #3560 and her calf were first spotted off the coast of Georgia in mid-December 2019, and were last sighted on April 6, 2020, off Cape Lookout, North Carolina. A necropsy has been completed and we hope to share preliminary results tomorrow (Monday, June 29).

The mom, #3560, was born in 2005, so is now 15 years old. She’s been seen in all major right whale habitats over the years, from Canada to Florida, and frequented the Southeast, the only known calving area for this species, in the past but was not observed with a calf until this year. Sadly, this was her first calf. This is also the mother and calf pair that were documented in the Gulf of Mexico back in March. The status of the mom is unknown at this time.

“We were encouraged to learn of this right whale calf’s birth last year, marking the first calf born of the season. The news of its death is distressing and yet another setback for an endangered species we are working tirelessly to protect,” said Philip Hamilton, Research Scientist with the New England Aquarium who manages the North Atlantic Right Whale Catalog.

Another right whale calf was struck and seriously injured by a vessel earlier this year off the coast of Georgia. That mom and calf pair were last seen alive together on January 15, but the calf’s current status is unknown.

NOAA urges everyone to please give these animals their space. Stay informed! Learn about recent right whale sightings through our Northeast Fisheries Science Center’s Right Whale Sighting Advisory System. The law requires keeping a safe distance of at least 500 yards by sea and air (including drones)  from North Atlantic right whales because of the dire status of the species. Get more information on how to safely view marine mammals in their habitats from our marine animal viewing guidelines.

If you see a sick, injured, stranded, or dead marine mammal please report it to your local stranding network. In New Jersey, please call (609) 266-0538. 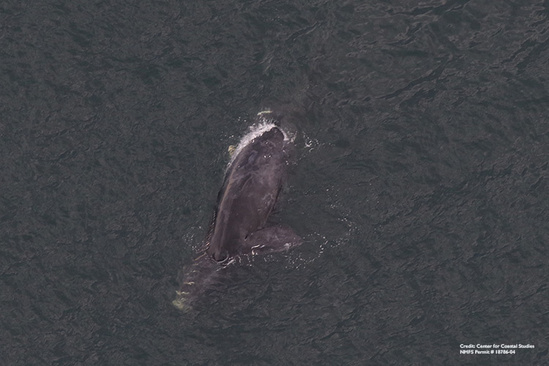 With the assistance of the USCG, the whale has been towed to shore so that a full necropsy can be conducted starting this afternoon, and continued tomorrow morning. As we stated in yesterday's update, we have several partners in our northeast Marine Mammal Stranding Network assisting with the necropsy. We thank them for their continued support in this important effort.

Working closely with members of the stranding network, U.S. Coast Guard, and New York Department of Environmental Conservation to locate this right whale, we have confirmed that the carcass was floating off of Monmouth Beach, New Jersey as of 12:15 p.m.

We are now working on a plan to tow it to shore for a hands-on examination (necropsy).

Several partners in our northeast Marine Mammal Stranding Network are helping. Atlantic Marine Conservation Society, Marine Mammal Stranding Center, Virginia Aquarium, and International Fund for Animal Welfare are preparing to send biologists to assist with the necropsy, so we can learn more about this animal, its health, and possible cause of death.

Preliminary observations show a number of wounds along the head and body of the whale that are consistent with a vessel collision. It is too early to say whether this was the cause of death.

If you have information about this incident, please call the following number: (866) 755-6622 (select option “zero”). Any information will help us determine what happened to this whale, and contribute to our ongoing work to reduce threats to these endangered animals.

NOAA Fisheries uses multiple strategies to reduce the risks of collisions between ships and right whales. These include regulatory requirements, voluntary programs, and outreach. We require most vessels 65 feet or longer to transit at speeds of 10 knots or less in designated Seasonal Management Areas (SMAs) along the East Coast of the U.S. to reduce the risk of right whale vessel strikes. Since aggregations of right whales may also form outside of designated SMA boundaries, we established a voluntary Dynamic Management Area (DMA) program that encourages vessels greater than 65 feet in length either to avoid the area or to transit at speeds less than 10 knots.

This morning, we received a report of a deceased floating whale off the coast of Elberon, New Jersey. Based on the available photos, it has been confirmed to be a North Atlantic right whale.

The Marine Mammal Stranding Center (MMSC), Atlantic Marine Conservation Society, and NOAA are currently working with resources in the area to secure a necropsy location, and members of the stranding network are making plans to assist in this effort, so we can learn information about this animal.

The Center for Coastal Studies aerial survey team was flying on Long Island today and redirected their efforts. They were in the vicinity of the whale around 3 pm to document the animal, and confirmed that it was a right whale. MMSC is also headed out with U.S. Coast Guard to get additional photos from the water.

This is the first observed right whale death in U.S. waters in 2020. An unusual mortality event has been in effect for North Atlantic right whales since 2017, during which 31 whales (including this one) have been found dead in U.S. and Canadian waters, and an additional 10 live seriously injured whales have been documented, bringing the current total number of animals in the UME to 41.

The leading causes of death for this UME are entanglements or vessel strikes. Two of the 10 live whales reported as seriously injured in this UME were reported in 2020—one was a calf that had been struck by a vessel off the coast of Georgia, and the other was an adult female with an entanglement last seen off the coast of Massachusetts. Both of those individuals were last seen alive but their current status as of today is unknown.

North Atlantic right whales are endangered, with only about 400 remaining, of which only about 95 are breeding females.