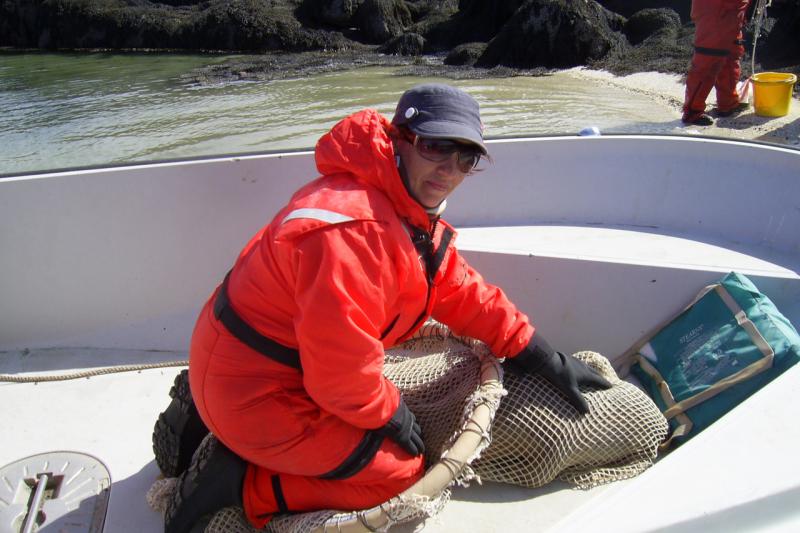 The past year has been devastating for North Atlantic right whales, whose population is already critically endangered with only 450 individuals remaining. At least 17 whales died in 2017, and one was found dead in January 2018, bringing the total to 18 known mortalities over the past year.

NOAA Fisheries scientists, together with our partners and counterparts in Canada, launched an investigation into the causes of the deaths in the summer of 2017. After examining the carcasses and conducting laboratory analyses, we determined that several of the whales died after either being struck by vessels or becoming entangled in fishing gear—two of the leading known causes of North Atlantic right whale injuries and mortalities. 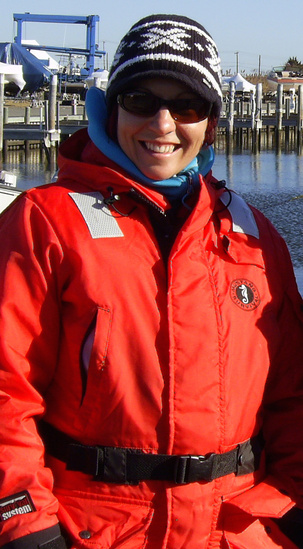 For Mendy Garron, a “typical” workday doesn’t exist. As the NOAA Fisheries Marine Mammal Stranding and Response Program Coordinator for the northern states in the Greater Atlantic Region, she helps coordinate emergency response efforts for marine mammals, including North Atlantic right whales, that are stranded, in distress, or dead. Mendy stays busy; the coastal waters of the North Atlantic have abundant marine wildlife with frequent large whale strandings. Whatever the day holds, one thing’s for sure—she’s determined to make a difference.

What is your role when a North Atlantic right whale strands?

My colleagues and I work with several marine mammal stranding network partners throughout the region to respond to the emergency at hand and develop a plan for the whale, whether it is alive or dead. A large part of my job is coordinating all of the moving pieces of the response effort with other federal agencies, such as the U.S. Coast Guard and National Park Service, as well as state wildlife agencies who help support our work.

What is the most challenging thing about working with North Atlantic right whales in your job? 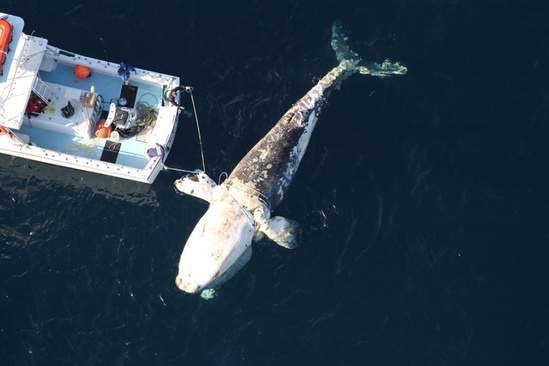 The sheer size of the animals is one of the biggest challenges. Adults can be very big—around 50 feet long and 60 tons. One whale is bigger than a bus and much, much heavier! Many times, we receive reports of dead whales far from land and floating at sea. Some may think that animals this large would be easy to locate and tow to shore for examination, but that's not always the case. It can be very challenging to find and move carcasses, even with the help of people in airplanes and boats. We need  many resources to respond when these whales are found dead or alive and in trouble.

What information can scientists obtain from dead animals? 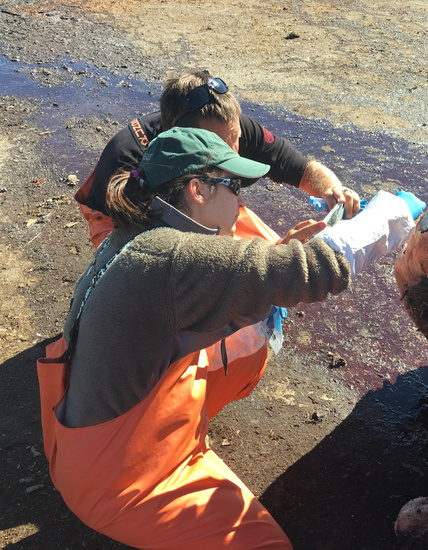 Necropsies—or animal autopsies—provide scientists with important life history information and are needed to help determine cause of death. For North Atlantic right whales in particular, researchers identify the dead whales by matching them to a catalogue that identifies individuals by their callosities (the raised patches of roughened skin around the head). When scientists identify an individual whale, they can review all previous sightings of the whale to determine if it had any prior entanglements, injuries, or illness, as well as understand its ranging patterns and reproductive history. Scientists collect hundreds of samples during the necropsy process, which they can then use to study various aspects of whale biology and pathology. For example, one current study uses baleen collected from whales to examine their hormone levels in order to help determine if an animal had been pregnant or experienced another incident (like a previous entanglement) that would have caused higher stress levels.

What do we still have to learn about how our actions are affecting North Atlantic right whales?

In 2016, a team coordinated by the International Fund for Animal Welfare (IFAW), conducted a necropsy on a right whale calf found off of Massachusetts. Researchers determined that the whale died from a vessel strike. Photo Credit: IFAW, collected under NOAA permit 18786.

North Atlantic right whales are one of the most studied populations of marine mammals in the United States, but there is still a lot we do not know. Over the last couple of years, the distribution of right whales has shifted. This may be because the zooplankton they eat has moved. We need to learn more about how the changing ocean environment is affecting right whale distribution, declining reproductive rates, and overall population health. They are also up against shipping and boat traffic, chronic exposure to noise, and interaction with fishing gear—we need to better understand these and other risks in order to find ways to lessen their impact.

Is technology the answer to the crisis?

Yes, emerging technologies will be important tools for future whale conservation efforts. Drones, satellite tags, and passive acoustic recorders are just a few tools that marine mammal scientists have adopted for their research. Biologists and managers are using data from the automatic identification system (AIS) used on ships and by vessel traffic services to get a better picture of vessel traffic. Off the coast of Massachusetts, we were able to change our shipping lanes around areas where we have typically seen right whale aggregations to help reduce their interactions with vessels. Going forward, I think technology may help us answer and resolve some of the complex questions and make sound management decisions. 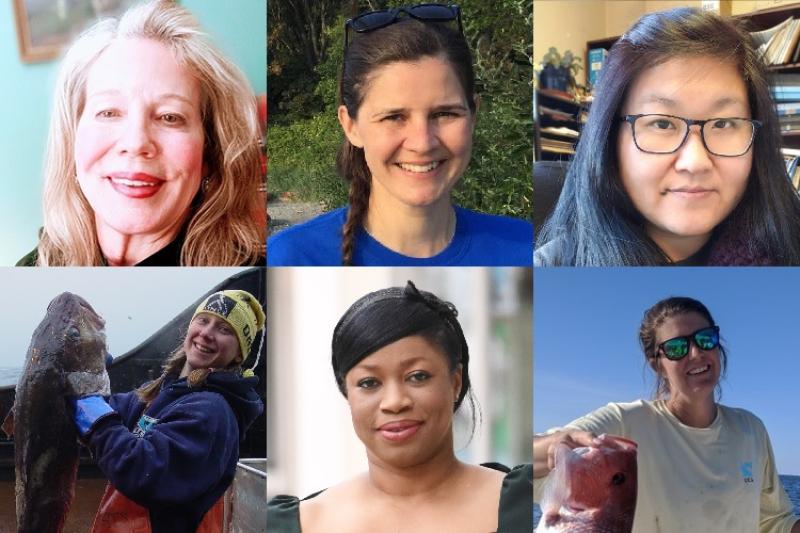 Last updated by Office of Communications on February 16, 2018 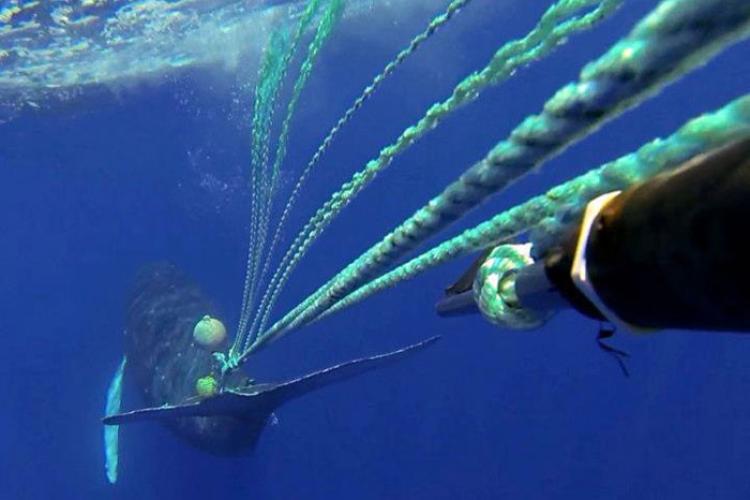