Citizen scientists of Hawaii, we need your help counting turtles—and here’s why! 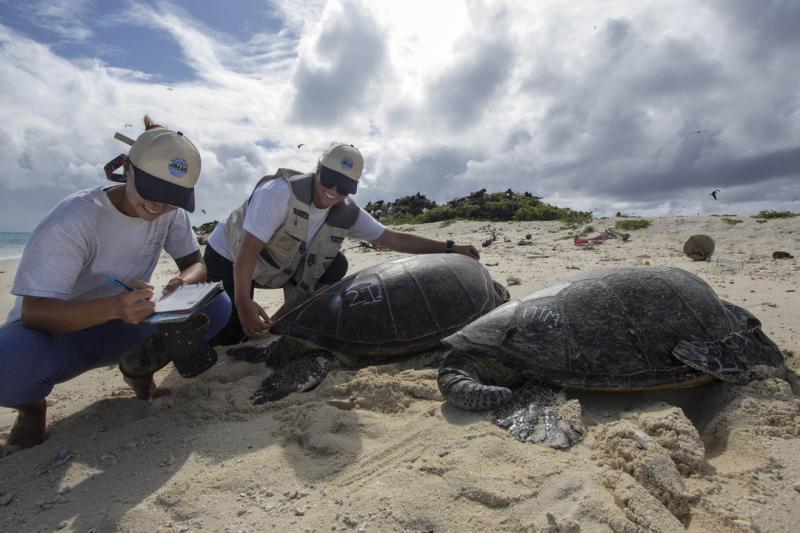 The turtles are returning! Since April, an intrepid team of NOAA biologists has been up in the Northwestern Hawaiian Islands, marking all of the endangered green sea turtles (honu, in Hawaiian) that are nesting or basking. Anytime now, the first of those turtles will return to the main Hawaiian Islands. We need residents and visitors to help let us know where they turn up.

Last year, we asked citizen scientists to report all of their encounters with turtles that had numbers on their shells. Tracking these numbers helps us understand green sea turtle foraging habitats, migration, and distribution—we're calling it the “Honu Count.” Citizen scientists provided 70 reports of 23 numbered females and 9 males sighted around the main Hawaiian Islands for "Honu Count" last year. Adult turtles were seen in foraging habitats of Maui, Oahu, Kauai, and Hawai‘i Island.

Biologists etch a temporary number on turtles during the summer field survey. The number can last up to a year, and makes it easy to identify each individual turtle. If you see a turtle with a number on its shell: 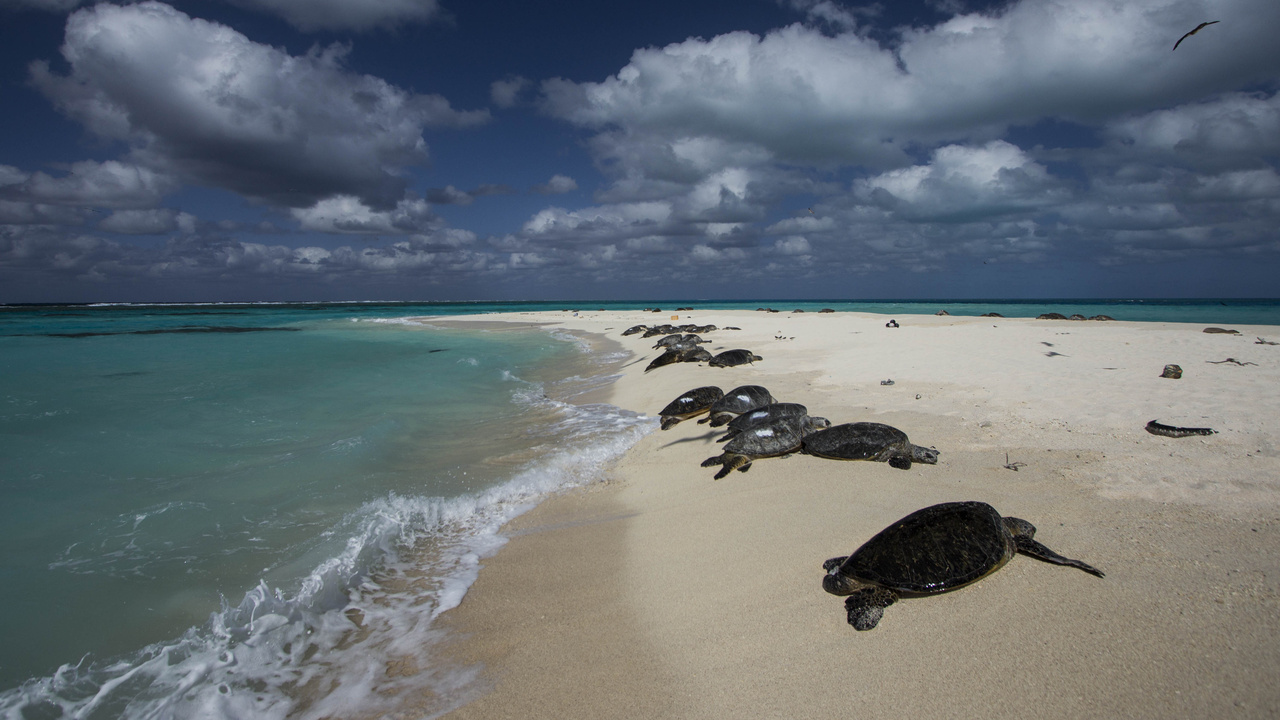 We are particularly excited about this season because our field team began numbering turtles earlier in the year and collaborative researchers numbered turtles along other Northwestern Hawaiian Islands, such as Laysan Island, Lisianski Island, Pearl and Hermes Reef, Midway Atoll, and Kure Atoll.

We are hoping for a great team of citizen scientists to report turtles. This year, when you report a numbered turtle, we will email you everything we know about the turtle, where it was when we numbered it, how many times it has been seen, and where it was seen. 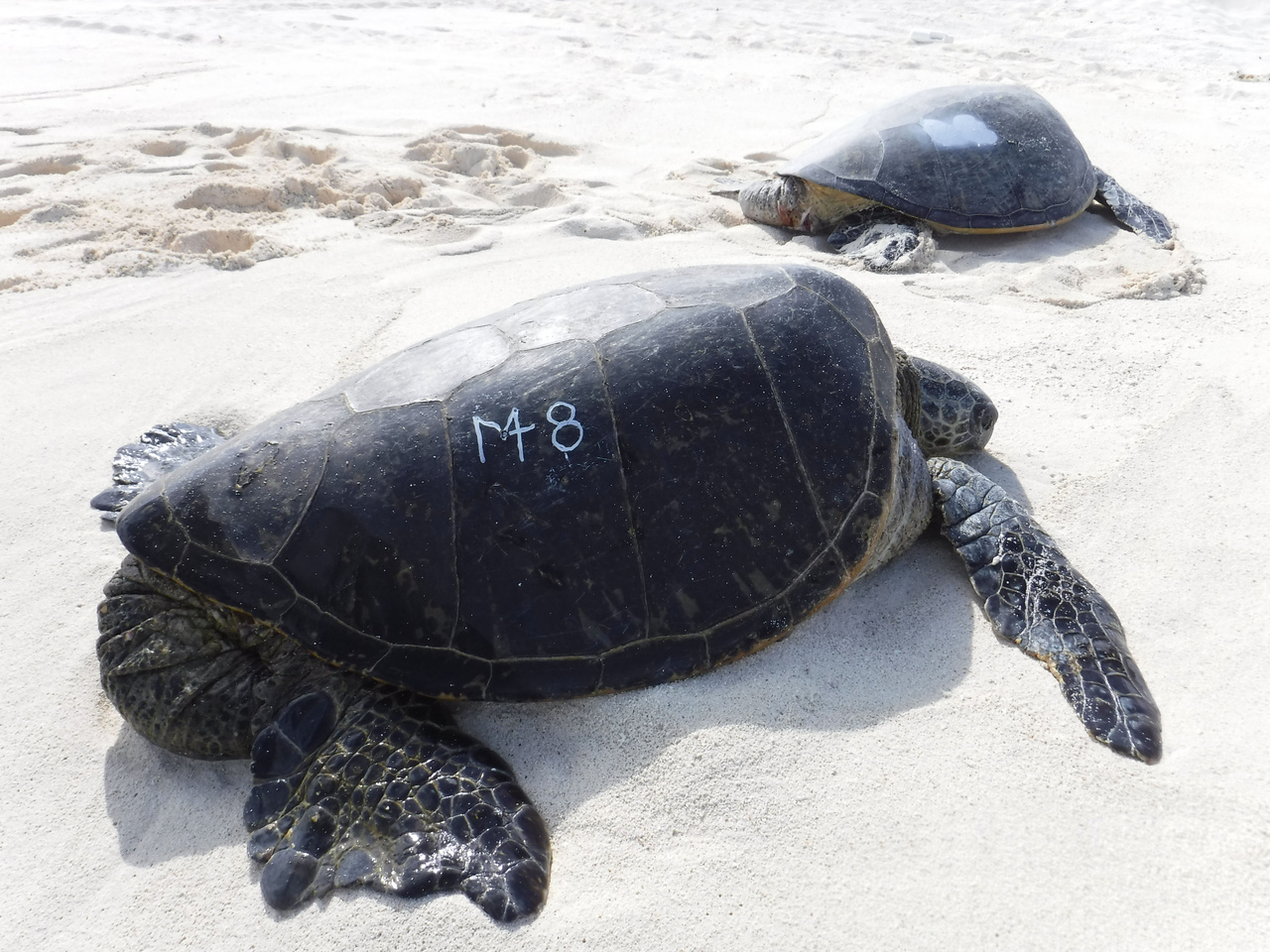 This summer, field biologists from NOAA’s Marine Turtle Biology and Assessment Program began monitoring turtles in April (a whole month earlier than the year before). The team is stationed in French Frigate Shoals until October, and has so far numbered 125 males and 131 females, and recorded 132 nests. The largest nest had 129 eggs! They have also encountered a female turtle that was first tagged as an adult in 1977 at Midway Atoll.

Marylou Staman (2nd season) – Marylou returned this season as a second-year lead researcher. Before working with the French Frigate Shoals team, Marylou conducted three years of sea turtle research on Guam. Marylou truly is “Momma Turtle” of the team. Her organizational skills and marine turtle nesting experience allow the team to thoroughly and efficiently achieve the goals of the program. Last season, she spent four months in the field. Clearly, this East Island Exile was “East-Island-eager” to go back! 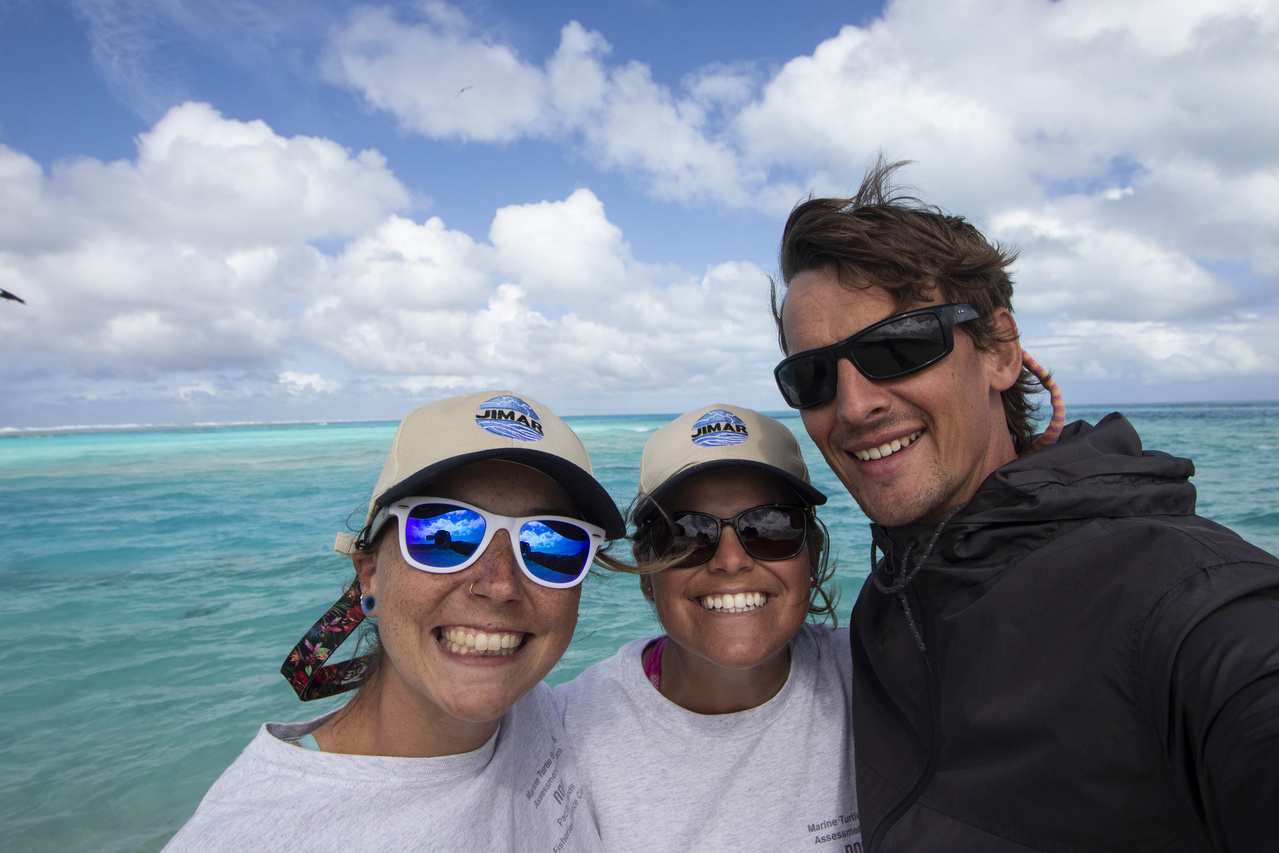 Jan Willem Staman (2nd season) – Jan Willem is also a second-year returnee and the hard-working handyman of the team. During his previous fieldwork, he became well-known for his diligence and his many turtle entrapment and entanglement rescues. He also knows a great amount about turtles, most of which he learned working alongside Marylou while assisting her with research in Guam.

Lindsey Bull (1st season) – Lindsey first began working with our program in 2016 as a student assistant for Sea Turtle Stranding Response. In this position, Lindsey gained lots of hands-on experience with sick, injured, and dead turtles. In the summer of 2017, she helped rehabilitate sick and injured turtles and began her own project, a nutrition study, examining the stomach contents of juvenile turtles. This is the first time Lindsey has worked with nesting turtles, but from our last update, she is loving field life and is excited for the rest of the season!