It All Started in a Shed

In celebration of our 150th anniversary, we are highlighting people and activities that helped build the foundation of fisheries and marine science. Public and private funds enabled the U.S. Fish Commission to build its first permanent facilities. 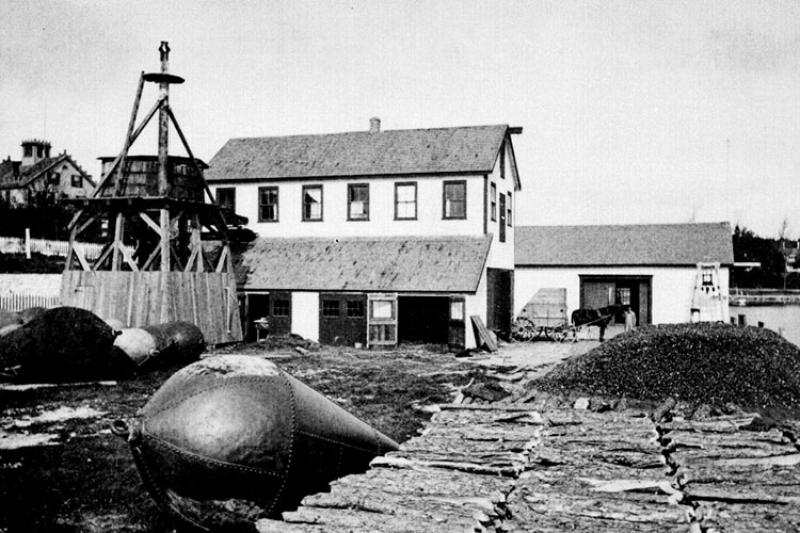 The original lab building with renovations, 1875. A crate housing a piano is visible on the horse-drawn carriage at right. Credit: NOAA Fisheries, NEFSC Historical Collection

The first marine station in the United States started out small: in a borrowed shed. The value of the research conducted there was proven early on. However, getting a larger, permanent space required a leader with personality who was also a gifted scientist and persuasive administrator.

The original lab for the U.S. Fish Commission was in a shed borrowed from the Lighthouse Board on the shore of Little Harbor in Woods Hole, Massachusetts. The shed was renovated and expanded in 1875, with federal and private funds, into a more permanent, two-story laboratory with a windmill for pumping seawater for the research aquaria.

The first floor was focused on research on fish, the second for biologists studying invertebrates. A small part of the shed, unofficially known as the “Sharks Parlor,” was set aside for conversations, reading, and relaxation. A piano was often seen on the back of a carriage parked nearby.

Most research was conducted during the summer months, when students and university researchers would join the Fish Commission staff. Collecting species in local waters and studying them was a priority since many were unknown. Year-round operations continued on a much smaller scale under local resident Vinal Nye Edwards. Edwards was a naturalist and collector and the first federal fisheries employee.

As the scope of research activities and staff grew, a larger and more permanent facility was needed. Baird decided that the south coast of New England, specifically Woods Hole, was the best option for permanent facilities due to water quality and other factors. The other location under consideration was Newport, Rhode Island.

Baird used his many persuasive powers to convince local business leaders, scientists, and several colleges and universities to donate funds or land for the new research station. Collaborators included Old Colony Railroad, Isaiah Spindel and Company, John M. Forbes, Joseph Story Fay, Alexander Agassiz, Mrs. Robert L. Stuart, Johns Hopkins University, Princeton University, and Williams College. Baird had offered use of a research table and facilities at the proposed new lab to a researcher from each academic institution in exchange for their support. Land at the end of Water Street, owned by Fay, was deeded to the U.S. government.

Construction on the lab commenced in 1884, beginning with a seawall and refuge for small vessels. The cost: $52,000—about $1.4 million in today's dollars—with $25,000 for construction, about $681,000 in today's dollars. At the same time as excavation and dredging were underway for the piers, foundation work started on housing for personnel. Known locally as the Residence, the living quarters became a local landmark.

Station plans were drawn up by Spencer Baird with assistance from biologist and professor A.E. Verrill of Yale University, assistant to Baird. They included the residence plus a laboratory and hatchery building, a pump house with a seawater reservoir, a coal shed, and a storehouse. Baird and Verrill also designed the research tables and much of the equipment.

The 120x40-foot laboratory building, the Residence and other support facilities were completed in 1885. Congress appropriated $70,000 for the Woods Hole station buildings and equipment.

The entrance hall on the first floor of the three-story building separated a fish hatchery on one side and a public aquarium on the other. The second floor was also divided in half. A large laboratory with tables for biological research filled one side. Three offices, a chemistry lab with fume hood, and a small storage room occupied the other half.

The third floor housed the library and two large storerooms—one for chemicals and one for glassware and scientific instruments. Living quarters for the fish culturists and janitor occupied several small rooms; those spaces were later converted into laboratories.

Age and storm damage from a number of hurricanes led to demolition of the residence, lab and support facilities on Water Street. While construction of the new facilities was underway, staff moved into interim space at Seaborn Manor, a former guest house about 2 miles away. Today, Seaborn Manor is home to the Sea Education Association, a non-profit research and education organization. It offers an at-sea experience for college students and others aboard tall ships.

A new three-story brick laboratory, and a separate maintenance building with a public aquarium, were constructed on the site of the former facilities. Staff moved into the current main lab in 1960, and into the aquarium/maintenance building in 1961. A small house that was originally constructed for Navy personnel during World War II now houses researchers who study fish age and growth.

Today, staff work in these three buildings in Woods Hole as well as in leased space in Falmouth and Pocasset, Mass.