Eighteen years after restoring flow to an important section of the Roanoke River, populations of key species—including the American eel and beneficial freshwater mussels—are growing. 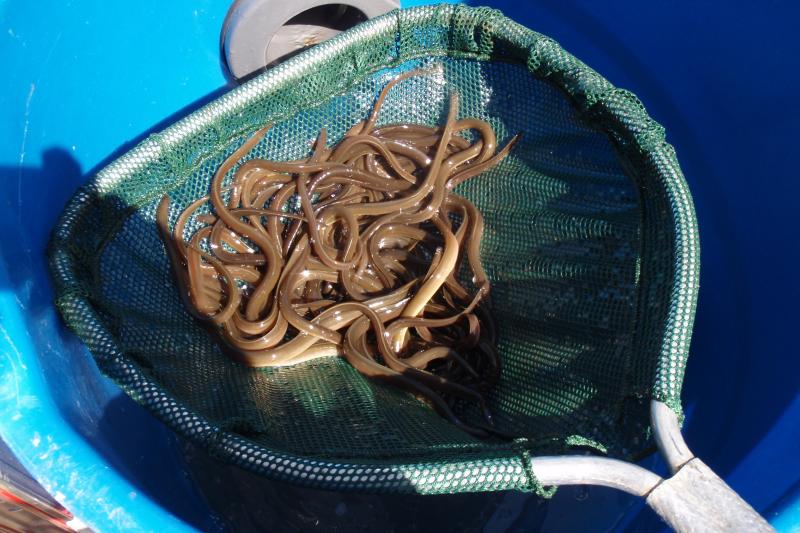 American eels captured in the bypassed reach downstream of Roanoke Rapids Dam. Almost all of the migrating eels at the dam first pass through the bypassed reach, which has become an important migration corridor since flow was restored to this area. Credit: Dominion Energy

Hydroelectric dams play an important role in generating energy. However, they also alter a river’s natural flow and limit access to upstream habitat essential to migratory fish species. Eighteen years ago, NOAA Fisheries and partners restored flow to a section of the Roanoke River that had been bypassed for five decades. Long-term monitoring of this area is showing a steady increase in the number of resident fish, notably the American eel. Freshwater mussels, including highly vulnerable species, have also begun to flourish. Interestingly, American eel may play a role in the sudden increase in these mussel populations.

The Roanoke Rapids Dam was built in 1955. Since that time, dam operators have diverted the majority of downstream flows through a channel that carries water away from the powerhouse. This cut off the flow to a 331-acre portion of the river adjacent to the channel, which became known as the bypassed reach. In 2004, the Federal Energy Regulatory Commission issued a new license to Dominion Energy to operate the hydroelectric dam. At that time, NOAA Fisheries and partners requested that flow be restored to the bypassed reach to improve fish passage at the dam.

In 2005, Dominion Energy restored flow to the bypassed reach in accordance with the terms of the new license. To maintain downstream flows throughout the year, operators release a minimum continuous flow over the dam’s spillway and into the reach. During certain parts of the year, they also release additional flows up to three times the minimum. This helps the upstream migrations of anadromous fish species, especially American shad, river herring, and sturgeon.

Higher flows similar to natural river conditions only occur in the bypassed reach when the dam is actively spilling water. This happens due to project maintenance, increased flows from upstream dams, or river floods. Typically, these large flows occur several times throughout the year. Combined, the flows keep the reach wet year-round, and allow migratory species to access this area during their spawning season. However, the dam still diverts the majority of flows through the powerhouse to generate electricity.

The terms of the new license also prompted ongoing monitoring of resident fish and mussel populations in the bypassed reach, so that resource managers could better understand the impacts of habitat restoration. Researchers conducted surveys in 2004, 2006, and subsequently every 5 years. They completed the most recent survey in 2021. These long-term monitoring efforts have shown the positive effects the project has had on Roanoke River fish species. The area now supports larger resident fish populations, and biodiversity in the restored habitat is relatively stable.

In particular, the American eel has benefited from the restored flows. The consistent baseline flows have stabilized a series of shallow forested pools and streams, which eels favor for shelter during their less active periods. Monitoring efforts show that American eel is the most abundant resident fish species. The population consists of both older adults and juveniles migrating upstream. Studies of the fishways at Roanoke Rapids Dam found that 99 percent of the eels that pass upstream approach the dam through the bypassed reach. This indicates that this section of the Roanoke River has become an important migration corridor for young eels as they move upstream.

Almost two decades later, freshwater mussel populations have also drastically increased. Mussels are filter feeders, and are important for maintaining water quality in natural river systems. Some populations of mussel species have grown more than 10-fold since the last survey in 2016. The northern lance, which North Carolina resource agencies consider “significantly rare,” is now the most abundant mussel species in the reach.

American eel may play a role in the sudden increase in mussel populations. Mussel larvae travel on the gills of eels, hitching a ride to new habitats. This increase in freshwater mussel abundance provides even more evidence that the project has positively impacted the Roanoke River. It also highlights the importance of long-term monitoring in determining the success of restoration efforts.

Last updated by Office of Habitat Conservation on July 07, 2022