The Presidential Early Career Award for Scientists and Engineers honors Dr. Michelle Barbieri for her achievements in scientific research, leadership, and community engagement and service. 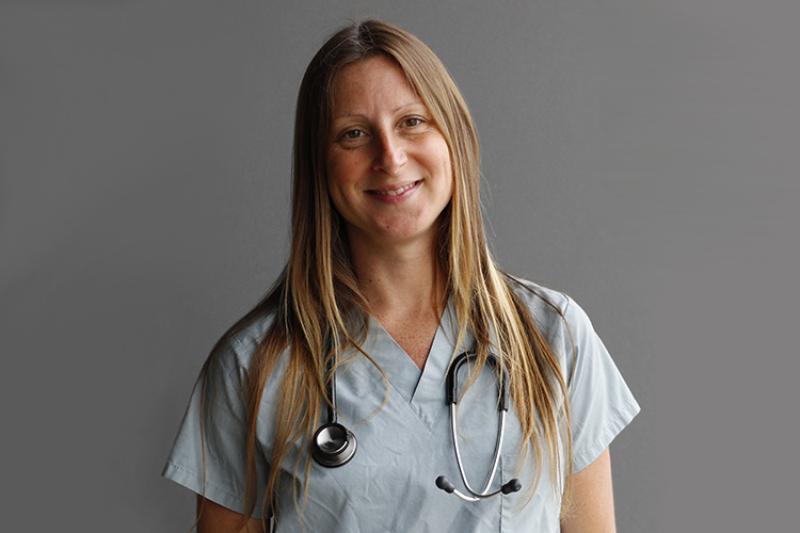 Dr. Michelle Barbieri, of NOAA’s Pacific Islands Fisheries Science Center, received the Presidential Early Career Award for Scientists and Engineers (PECASE). She is one of five NOAA researchers to receive the prestigious award this year. Dr. Barbieri is being recognized for her achievements in scientific research, leadership, and community engagement and service.

Beginning a Career at NOAA

Dr. Barbieri joined the Pacific Islands Fisheries Science Center in 2012 as a conservation medicine veterinarian on a shared appointment with The Marine Mammal Center.

One of her first challenges was saving the well-known Hawaiian monk seal R5AY, or “Honey Girl,” as her fans call her. Honey Girl had a reputation for being a really good mom and producing a lot of pups, which made her a particularly valuable seal in terms of species survival. She was found in a state of severe starvation with fishing line wrapped around her tongue. In an effort to save her life, NOAA and partner agencies brought Honey Girl into captivity and prepared her for surgery.

According to Dr. Barbieri, her initiation to the Center was anything but simple: “Welcome to the Hawaiian Monk Seal Program. This is our severely injured, very valuable, and publicly beloved Honey Girl. You must save her!” So much for easing into the new job.

Since then, two themes have dominated Michelle’s career: (1) rising to meet new challenges, and (2) the power of community. Both of these featured heavily in Honey Girl’s recovery. The spunky seal’s medical crisis took several unexpected turns, but reached a successful conclusion on Thanksgiving Day, when she finally ate food. Dr. Barbieri remembers thinking, “Will any of this ever feel normal?” 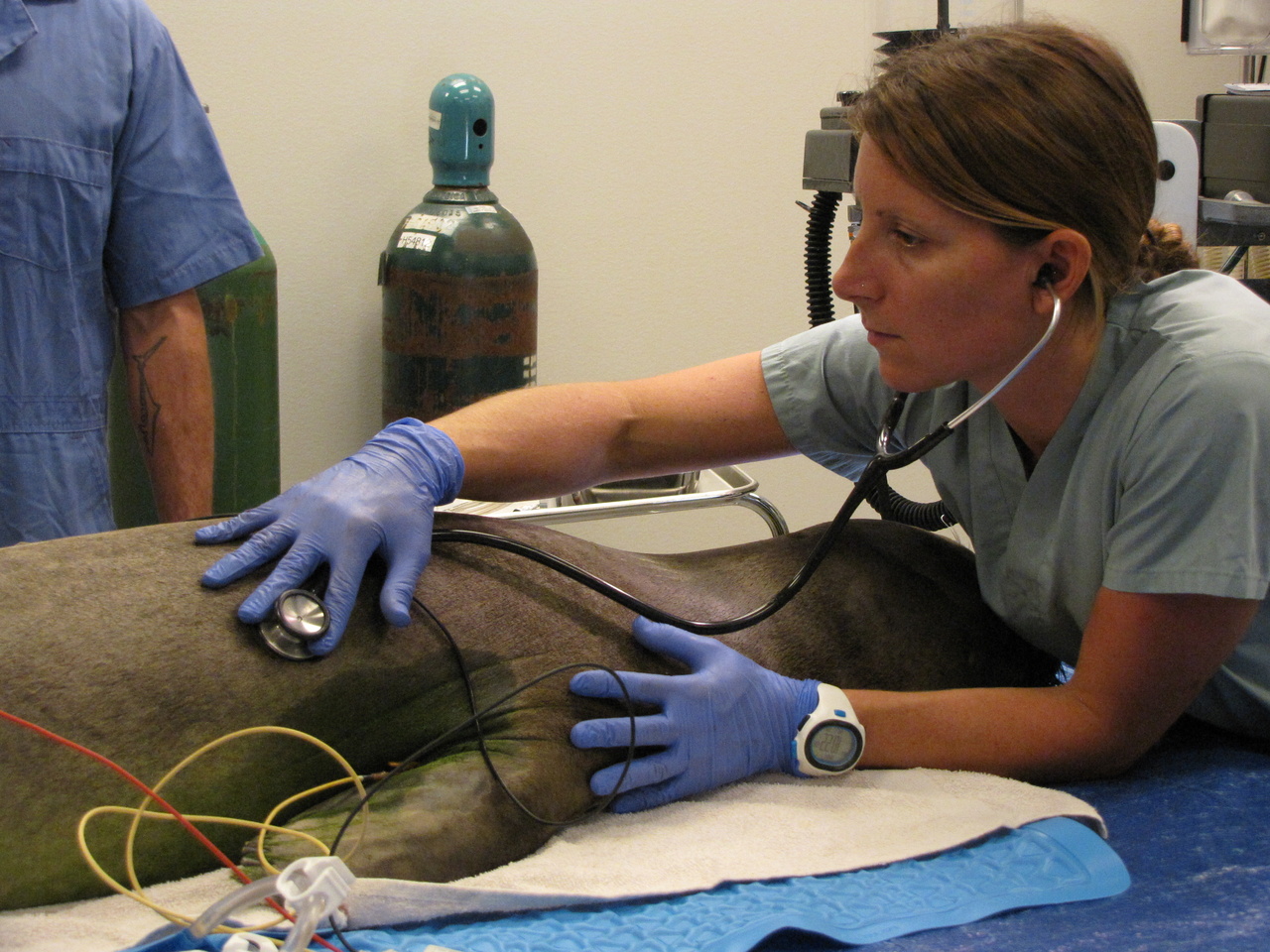 What at first felt like struggling to keep her head above water has come to feel like treading water. Now, she can get a sight line in the distance and plan for the future. She is the first to credit the strong team around her for this success. Dr. Barbieri had already been instrumental in advancements in the latest translocations the Hawaiian Monk Seal Research Program undertakes. They ensure the health and safety of young seals as they are moved to new locations to increase their hopes for survival. She also leads cutting edge research, and a team of federal, academic, and private partners in developing and implementing a world-class conservation program for Hawaiian monk seals. This includes the world’s only wild vaccination program for an entire marine mammal species.

The vaccination program is unique and essential. Years of small populations and genetic bottlenecks have resulted in Hawaiian monk seals being very genetically similar to one another. This reduces their resilience to disease and puts the population at great risk of a catastrophic disease event. Morbillivirus is a known threat, causing tens of thousands of marine mammal deaths worldwide. To protect monk seals from this virus, biologists tested the safety and efficacy of a vaccine on captive animals. They validated blood results to ensure the vaccine was producing antibodies.

Dr. Barbieri and her team then assessed the best strategy for vaccinating: Should they wait for an outbreak or vaccinate preventatively? They created sophisticated analytical tools using random simulation models of the monk seal social network to determine the best method for vaccination. Then, they developed protocols and trained staff to safely administer the medication. Among all of this research and planning, they also spent years helping the public understand and accept the necessity of this intervention.

This unique program is now in its fourth year. Through the program, we have vaccinated approximately half of the monk seal population and achieved herd immunity at some islands. Not only did it receive support from the public, but also media attention from national outlets including Science Magazine, Smithsonian Magazine, and National Geographic. The design and implementation of this program can serve as a model for vaccination programs for other species. 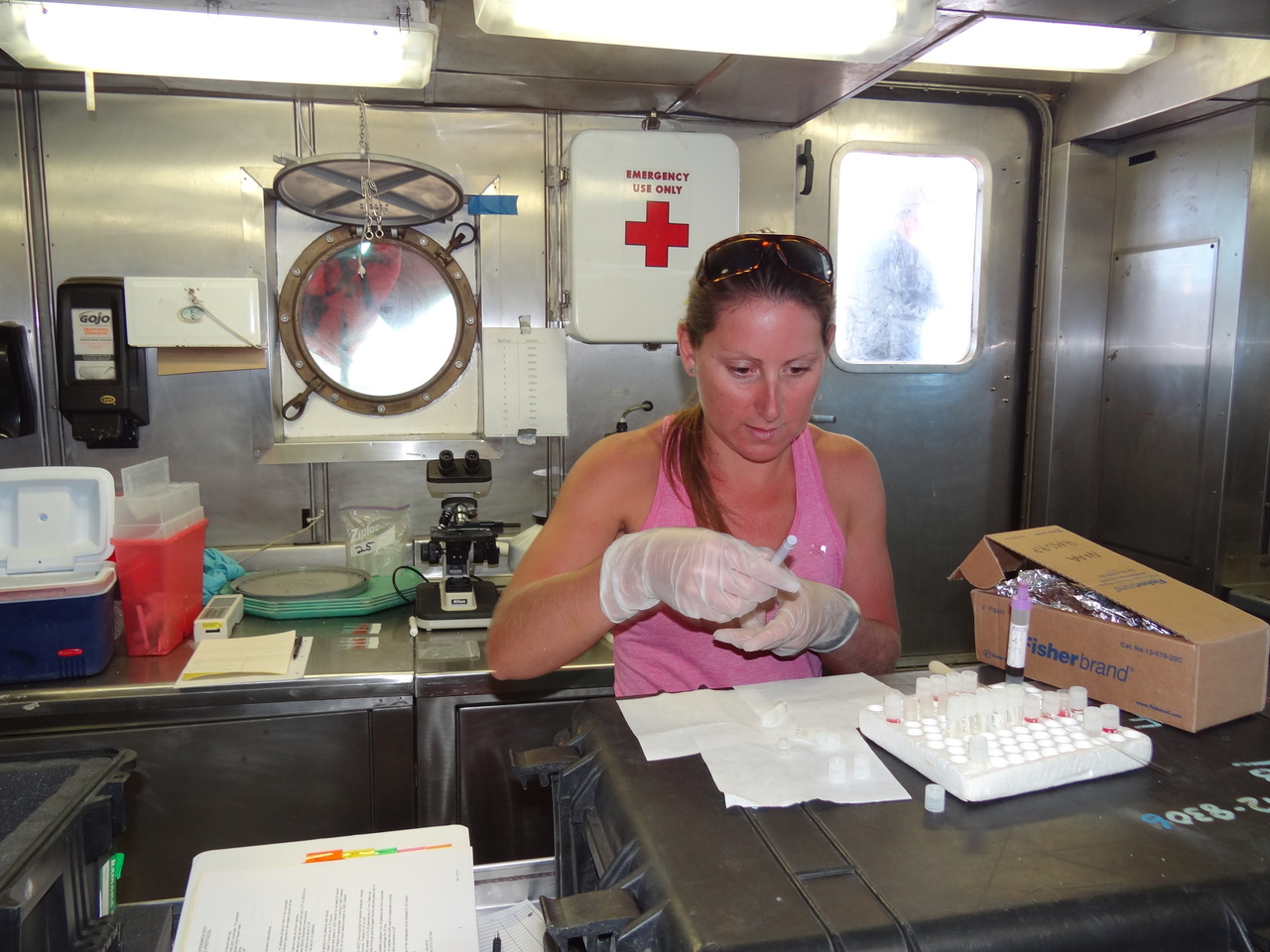 Dr. Barbieri’s research has also revealed the number one disease threat to monk seals and the leading cause of monk seal death in the main Hawaiian Islands. It is the protozoan parasite known as “toxo” or Toxoplasma gondii. Toxo is spread through cat feces flushed from the land through Hawai‘i’s many watersheds. It flows into the ocean, where it enters the monk seal food web. Dr. Barbieri’s team and partners are searching for methods to treat and prevent the disease. The only way to prevent infection is to find effective ways to stop the spread of the parasite and manage feral animals in Hawai‘i.

Dr. Barbieri has partnered with collaborators in state and federal wildlife agencies and researchers at multiple universities. They are trying to determine the impact of this disease on marine mammals, endangered birds, and humans in Hawai‘i. This information will be critical to help decision-makers find humane and effective ways to manage feral animals in the fragile Hawaiian ecosystems. 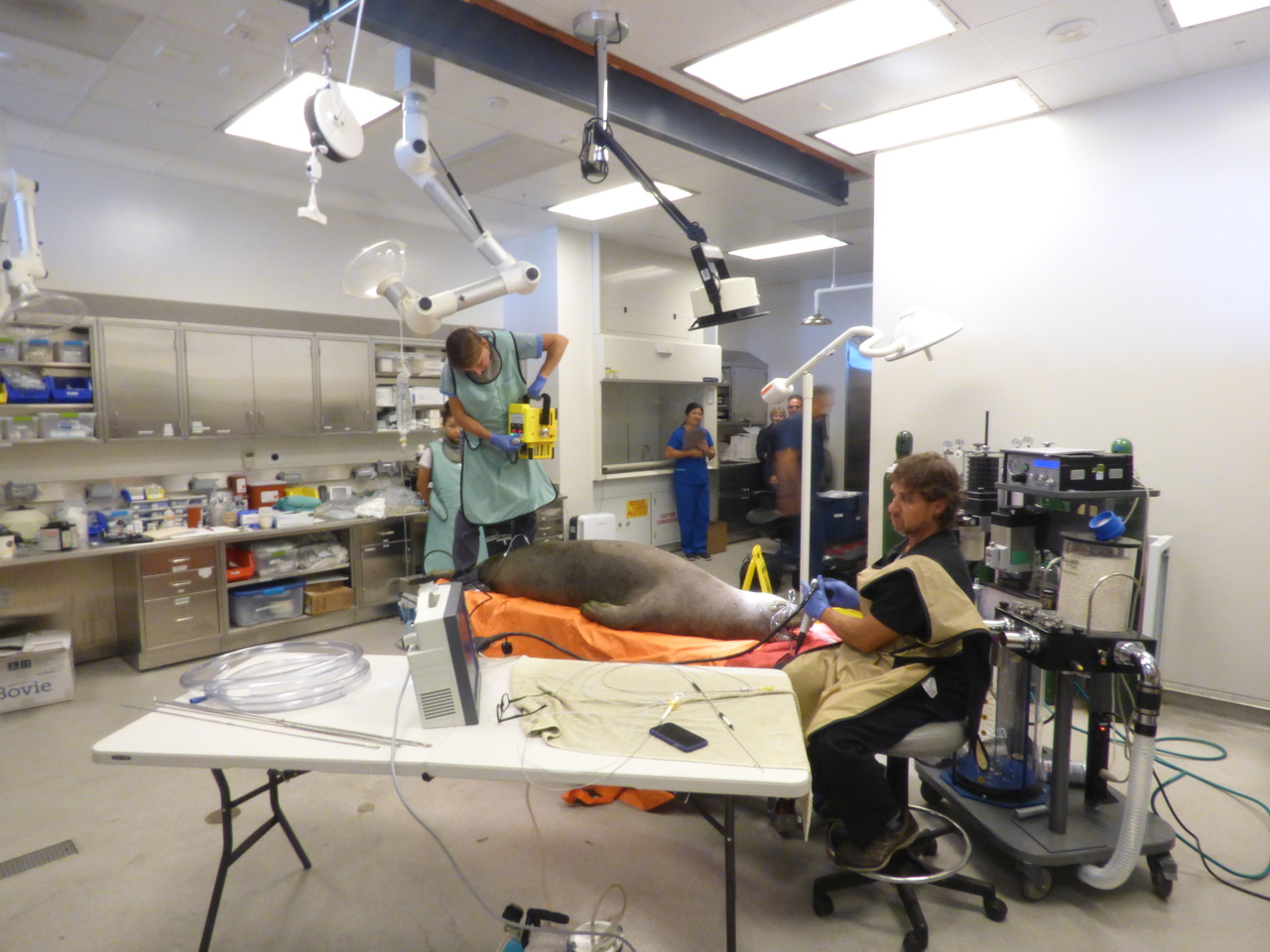 Dr. Barbieri wants people to know that this award reflects the work of countless partners and supporters. But she also deserves credit for helping to build that team. She has been a leader in expanding NOAA’s Hawaiian monk seal emergency response team. She has also led an increase in the agency’s capacity to react to a greater number and variety of injured or ill marine mammals and turtles.

She reached out to partners within NOAA, other state and federal agencies, and local communities. She also recruited individuals that were interested and had skills to aid in emergency response. She approached private veterinary practices to find veterinarians that were interested in expanding their expertise to more exotic species. Her efforts over the last 4 years have almost doubled the number of emergency response staff available. This reduced the heavy workload and stress level of many employees. It also increased the program’s ability to respond to simultaneous emergencies across the Hawaiian Archipelago. 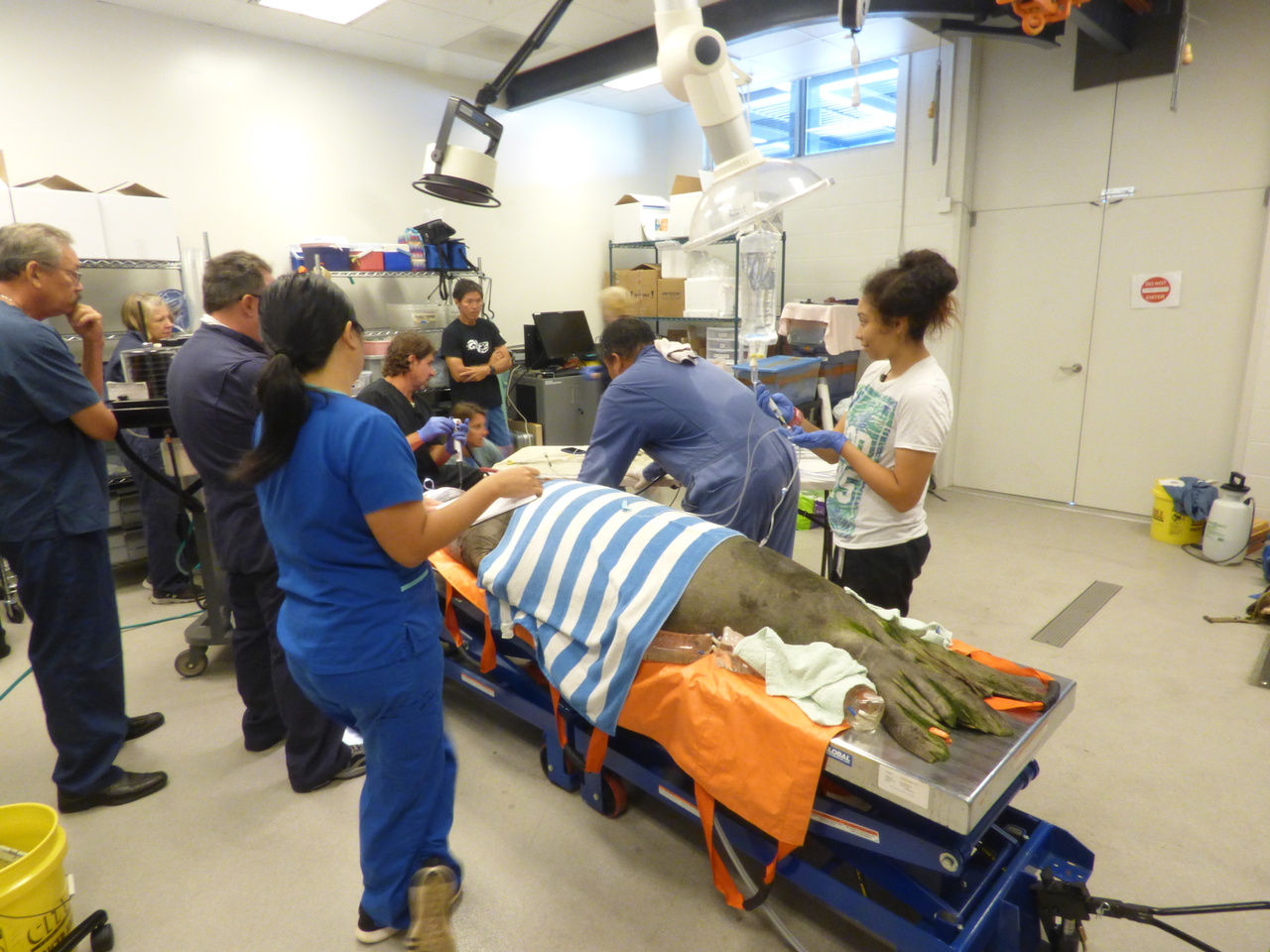 Dr. Barbieri and her team developed training protocols for new monk seal emergency responders. This allows them to safely participate in a variety of response situations on land and in water. This continued capacity building will facilitate response to sick and injured marine mammals and turtles as their populations grow and the number of responses increases. It will also allow for a transition of these responsibilities to local communities and non-governmental organizations as they increase their role in species’ conservation efforts. Importantly, it means that more animals can be saved. This will ensure fishing activities can continue, and that endangered species will have a better chance to thrive.

As a female conservation scientist and veterinarian, Dr. Barbieri embraces her responsibility as a role model. She hopes to inspire young women and men who are considering a career in science, technology, engineering, and mathematics (STEM). She values the guidance she received as a young scientist, and wants to pay it forward by embodying the traits of mentors she has had. Michelle actively supports and advises local high school and college students who are interested in biological and veterinary sciences. She also gives school and community lectures. She often works one-on-one with students to give advice on the steps necessary to follow a similar career path. By inspiring local students, Michelle ensures that this important work will carry on with the next generation.

Established in 1996, the Presidential Early Career Award for Scientists and Engineers honors the contributions that scientists and engineers have made to the advancement of science, technology, engineering and mathematics, and to community service as demonstrated by their scientific leadership, public education, and community outreach. The award ceremony will be held on Thursday, July 25, at the Daughters of the American Revolution, Constitution Hall, in Washington, D.C.