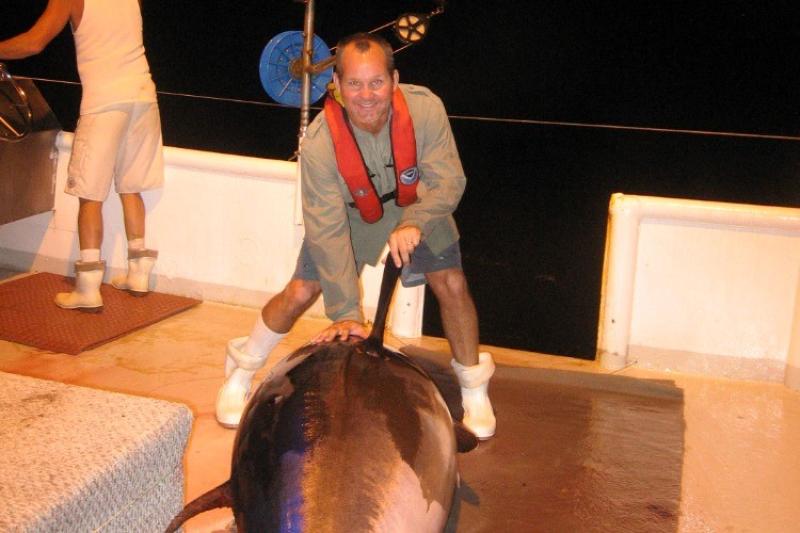 During the first stages of the Deepwater Horizon Oil Spill, Derke was in the Gulf of Mexico tagging bluefin tuna with the Cooperative Tagging Center. Credit: NOAA Fisheries.

I am a third generation Miamian and I practically grew up in the shadows of the science center building in Miami, Florida. The University of Miami main campus was my stomping grounds where I skateboarded and fished almost daily as a child. In high school I had several “Key Rats'' as friends, so I was on Key Biscayne, the neighboring island to the Miami facility, quite often. I never thought that I would eventually be working there. In those days I thought the facility was all just part of the university.

Where did you go to school and in what subject did you get your degree(s)?

I decided to major in Limnology (the study of freshwater) at the University of Central Florida because I thought that it was a path towards making me a better fisherman. While I was in school I worked for some renowned researchers and realized that doing research might be an even stronger pathway to becoming a better fisherman.

What piqued your interest in marine science?

Simply by chance, I was in Bimini, an island in The Bahamas, when the first thousand-pound blue marlin was landed there. That experience planted a seed in my mind, initially to catch a fish like that, but also to learn as much about these valuable resources as possible. It just so happens that it was 43 years ago today (the day that I am writing this) that this fish was caught.

How did you come to work at the Southeast Fisheries Science Center?

While at University of Central Florida, I started going to billfish tournaments in the Bahamas. At this point, I was going as a biologist and not my typical role in the past as part of a boat crew. I was studying the likelihood of the “Hatchet Marlin,” now known as the roundscale spearfish, existing outside the Mediterranean. I took measurements of the fish and presented the research project for graduate school. At these tournament events, I became associated with the Southeast Fisheries Science Center biologists who had a long history with billfish. After more than a decade of working with Florida’s Fisheries Independent Monitoring program in Marathon, I then applied at the center and began my job here.

What do you do at the science center?

I work for the Oceanic and Coastal Fisheries Branch of the Population and Ecosystem Monitoring Division. I am based at the Miami facility, where I have been since 2002. I help run the Cooperative Tagging Program, which is a constituent-based program that has been running since 1954 in various formats. The tagging center makes fish tags available to the fishing public and tournament operators, so that anyone interested in volunteering can help us tag—and sometimes recapture—these fish.

My first introduction into the tagging center was in 1976 when I helped catch and tag some white marlin offshore of Miami. Over time, the tagging center has had a bluefin tuna focus but has included many fish species. Currently the focus is on all Atlantic highly migratory species although we collaborate with researchers outside the Atlantic. Over the years I have tagged a wide variety of animals including fish, turtles, birds, sharks, and invertebrates with other programs using various tag types.

What I enjoy the most about working here is the variety of people that I work with. I enjoy the relationships I have created in the professional realm and the friendships I have built with fishermen worldwide. In addition to my work in highly migratory species tagging and the day-to-day boring stuff, like data management and tag kit distribution, I am able to work with some great colleagues on various sea turtle tagging projects, social science investigations, and participate in some general biology projects here and there.

What advice would you have for someone interested in a career at NOAA Fisheries?

In general, I am not one to be dispensing advice too widely. In my 30-plus years of doing this, I have seen a lot of “marine biologists” fade away into other careers. Many of them said that they always wanted to be a marine biologist. Based on that, I would tell someone to make sure that this is a career that you really want to be in. Get as much experience as you can, in as many disciplines as you can. You might have to start with a project that isn’t in your realm of expertise, but understand that the experience is what you are after. Take full advantage of any opportunity offered to you.

Is there a book, quote, or person that influenced you to be the person that you are today? Tell us why.

The first couple times I read The Old Man and the Sea I thought it was about fishing. It wasn’t until college that my eyes were opened to the deeper meaning of Ernest Hemingway’s writing. Another book that was influential to me was, So Excellent a Fishe: A Natural History of Sea Turtles by Archie Carr. Probably the most influential character that shaped who I was becoming was Travis McGee from John D. MacDonald. Given the era in which MacDonald wrote most of his books, he was ahead of his time in terms of concern for the environment.

What do you like to do outside of work?

Outside of work I tend to spend a lot of time outdoors. Obviously, I have been fishing for a long time. I also have been spearfishing, freediving, and SCUBA diving for just as long. I do quite a bit of hunting and hiking as well. Nowadays, one of my biggest activities is picking up trash from our shorelines. I have had people ask me about coming down to help (even to pay me to take them trash picking), but like any true fisherman I keep my techniques and honey holes somewhat secret. When I take friends out fishing I often state that I will focus on looking for treasures, such as old bottles, but I will also tell them when I see a good fish.

Oh, yeah, I am also very proud of my family. I have two sons in the military, a wonderful wife, and a fantastic, smart daughter. We have two dogs, but it could be four if my wife and daughter win that battle. We’ve also got a horse, several fish, occasional snakes, and a yellow-naped Amazon parrot that has been in the family since 1988. Luckily, we gave away a family of tortoises a few years ago so we only have one pet that will outlive us, for now.