Greg Fulling is a biologist working on Endangered Species Act consultations in the Office of Protected Resources. He is a U.S. Air Force veteran and proud career civil servant. 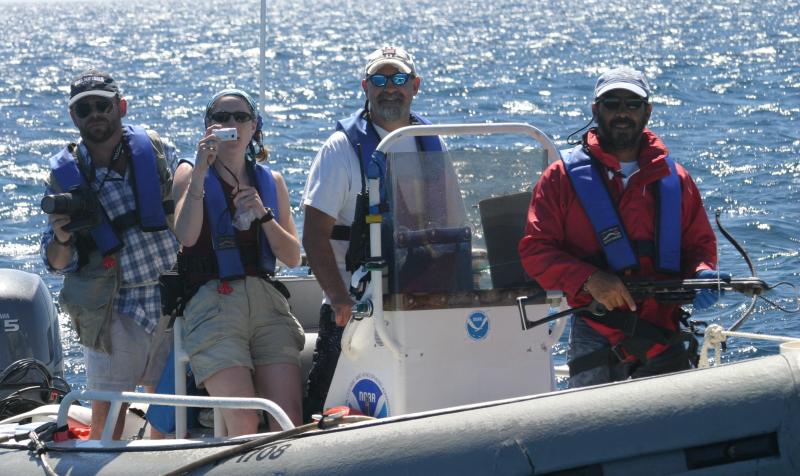 Greg and colleagues on a rigid-hulled inflatable boat while conducting research on humpback whales off Silver Bank, Dominican Republic during the More North Atlantic Humpbacks (MoNAH) survey in 2004.

My work as an Endangered Species Act biologist is multifaceted. Interagency, or section 7, consultations are designed to assist federal agencies in ensuring any action they authorize, fund, or carry out is not likely to jeopardize the continued existence of a listed species or result in the destruction or adverse modification of designated critical habitat. I am part of a large group of dedicated ESA biologists. I work with federal agencies through informal, formal, and programmatic consultations to make sure threatened and endangered species or their habitat are not harmed when undertaking activities such as construction or dredging. I also support the recovery of ESA-listed species through technical assistance, outreach, data entry, and participating in working groups addressing species recovery.

I grew up in Mt. Carmel, a small town in southern Illinois just north of Carbondale. As a very young child I remember watching Sea Hunt and being mesmerized by The Undersea World of Jacques Cousteau— that says it all. I remember my mother always saying that I was determined to be a marine biologist even though I had never even seen the ocean. When I finally did get to swim in the ocean in Ft. Lauderdale at the age of 15—I was hooked! The movie Jaws came out that summer (and I saw it 12 times). Those experiences started what would be a long journey to finally realizing my dreams. I learned to scuba dive the next year and found myself in the Florida Keys diving in John Pennekamp Reef State Park at 17. My first dive lasted less than 15 minutes! I came home that summer determined to focus on getting into a college with a marine biology option.

I started my college education at The University of Southern Mississippi. It was the only college I found that had a marine biology program, was far from home, and that I could afford. Plus, I could drive to the coast on the weekends. However, after 2 years, my career path took a detour and I joined the U.S. Air Force, got married, and had two children. It would be 8 years before I got back on the path to becoming Jacques Cousteau!

I went on to complete my Bachelor’s degree in Biology at Eastern Washington University while in the U.S. Air Force in 1986. When I returned from Desert Shield/Desert Storm, I was honorably discharged from the military and completed my Master’s degree at Angelo State University. Two years later, I would come full circle and come back to USM where I would complete my Ph.D. in marine biology in 2001.

For the last 21 years, I have had vast numbers of great work experiences all centered around protecting threatened and endangered species. My work has included conducting scientific research and analyses, writing biological assessments, environmental impact statements, and peer-reviewed scientific articles involving threatened and endangered species such as marine mammals, sea turtles, and fish. I have had the privilege of conducting my previous research off the U.S. Atlantic and Pacific coasts, Gulf of Mexico, Caribbean, and the Eastern and Western North Pacific including Guam, Hawaii, and Alaska.

My NOAA Fisheries work started in 2000 working as a Fisheries Biologist with the Southeast Fisheries Science Center.  I conducted ship and aerial surveys of marine mammals and sea turtles in the Gulf of Mexico and U.S. Atlantic seaboard. In 2004 I had the privilege to work on the More North American Humpbacks (MoNAH) whale survey at Silver Bank, Dominican Republic. I left NOAA in 2004 to work as an environmental consultant with various private consulting firms. I assisted the U.S. Navy with various projects and led their Marine Mammal Monitoring and Assessment Program in 2010. In 2018, I rejoined federal service with NOAA Fisheries  Office of Protected Resources as an Endangered Species biologist conducting informal, formal, and programmatic section 7 consultations.

What does Veterans Day mean to you?

Veteran’s Day for me is personal and deeply rooted now in who I am. My government service started when I joined the Air Force and became a Survival, Evasion, Resistance, and Escape Instructor. My job during my 8 years of service was to train military aircrews through practical experience, in the art of global survival. For example, after a crash landing or ejecting from an aircraft during peacetime or combat. This training for me was what is called by the military a Significant Emotional Event and these experiences would forever change who I was.

I had the honor and the privilege to serve my country during Desert Shield/Desert Storm where I trained coalition aircrews in combat survival, escape and evasion techniques, and how to resist interrogation if captured. My training of these aircrews was a vital part of ensuring these airmen adhered to the Military Code of Conduct so that they could return home alive and with honor. During my training and teaching, I read countless stories of valor and courage describing how those who served faced adversity and returned home with honor.
It was during my time in the Air Force that my desire to serve became ingrained in who I am. I learned so much about what it means to serve my country with honor.  I have a tremendous amount of respect for the men and women who dedicated their lives to serving our country when called. I am a disabled veteran as a result of a training mishap during a parachute jump. I have numerous friends who are disabled from their military service and they have my full respect for their sacrifice. As we veterans say “All gave some, but some gave all!” Until my military experience, I never fully appreciated the concept of government service. My military experience gave me a sense of purpose and would mold my future.

As I said, serving my country is now part of who I am. Being a part of NOAA Fisheries is just an extension of my previous service. I came back to the government to serve in the best capacity I know—protecting endangered species. Corny, yes, but it is true. Even when I was an environmental contractor and working for various federal, state, and commercial entities, I always advised my clients to “go the extra mile” to protect the natural resources as part of their action. This motto continues in my role today and was a big part of my work in Alaska. I believe in what we do in the Office of Protected Resources and my work is an extension of who I am. I also believe that “if you love what you do you will never work a day in your life.” This has been so true in my life.

What advice do you have for today’s youth interested in a federal government career?

Follow your dreams and don’t worry about how much money you make. If you want to have a sense of purpose and believe in yourself then take the leap and work in a career that allows you to realize your dreams and to be of service. The money will come over time and the experiences and the people you meet are worth their weight in gold 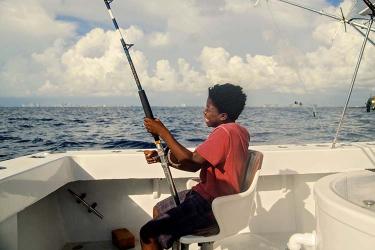 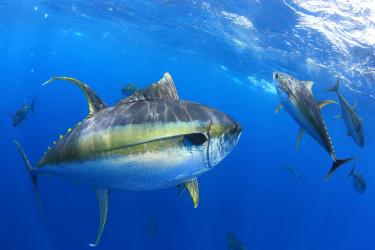 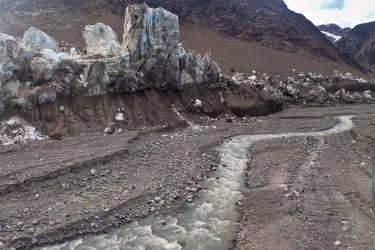