A recently weaned Hawaiian monk seal pup is using the waters and shoreline along the Kaiwi Coast and NOAA and partners are requesting beach goers and ocean users keep their distance, refrain from beach driving, and keep dogs on a leash. 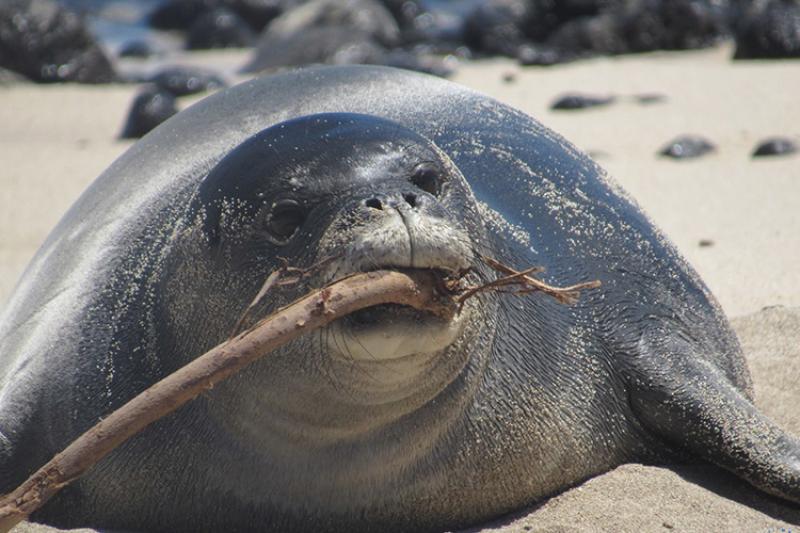 A recently weaned female Hawaiian monk seal pup has been resting along the shoreline and swimming in the waters along O‘ahu’s Kaiwi Coastline. She has appeared near some busy beach areas and hauled out in areas with a lot of vehicle activity on the beach. The Memorial Day holiday is coming up, and beach restrictions were recently lifted. We expect there will be many people and vehicles on the beach this weekend.

NOAA Fisheries gave the seal a temporary ID of PO2. She is also known as Nohea (lovely), a name gifted to her by 4th graders at a Hawaiian immersion school in Hau‘ula. Her mother is RK96 (Kaiwi), who was also born in this area in 2011. Nohea is Kaiwi’s third pup, and she is also the third to be born on the Kaiwi Coast.

Recently weaned pups are highly impressionable and this is a critical stage in their lives. Their mothers are no longer with them and the pups must learn to find food for themselves. These newly weaned pups may seek social interaction with humans.

There are a few ways that community members can help keep this young monk seal safe and wild.

Why Is It Important? 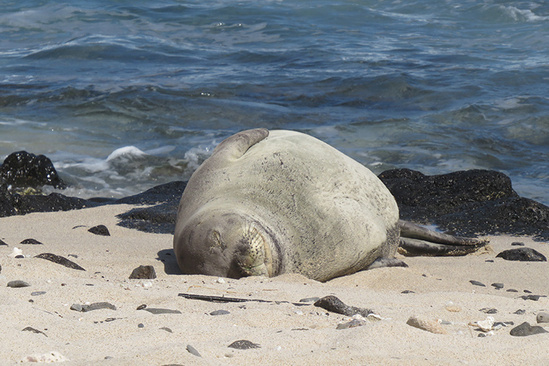 PO2 resting on the shoreline. Please observe monk seals from a respectful distance of at least 50 feet. Photo: HMAR.

It’s important to protect this pup, and all Hawaiian monk seals, because monk seals are an endangered species. They are one of only two mammal species native to Hawai‘i. Only about 1,400 of these seals are left and approximately 300 of them live in the main Hawaiian Islands.

Nohea may be approaching people in the water or on land as she continues to grow and develop into an adult seal. Approaching or attempting to play or swim with a monk seal may alter its natural behavior and ability to fend for itself in the wild.

Seals, especially pups, are naturally curious. However, it is against federal and state laws to disturb or feed a Hawaiian monk seal. When a seal is encouraged to be “friendly” with humans, it will ultimately lose its wild tendencies and chances of surviving in the wild. While the young seal may seem playful to some people, it is a fast-growing, 200-pound wild animal that could easily overwhelm keiki in the water. It is important to avoid approaching, petting, playing or swimming with, feeding, or otherwise engaging the seal in the water or on land. This is for both your safety and the health and survival of the seal.

Nohea has been spending time in an area where people often drive vehicles off-road and on the sand. Seals can blend into their environment—more so than you would think! They are often confused for rocks or other natural features, and this is especially true at night. Government workers and non-profit partner organizations are putting up reflective signs and cones around Nohea, but she may move outside these areas. Harming a monk seal with a vehicle or other means is punishable under federal and state law.

Dogs can pose a significant risk to monk seals, especially pups. Please keep your dog on a leash when in the presence of a monk seal to avoid injury or disease transmission to either animal. Your dog may be trained but a monk seal is not. In particular, a seal pup that has experienced life for just 6 weeks, exclusively with its mother, may not have developed a wariness of dogs. It is the responsibility of pet owners to keep their dogs at a safe distance from the seal.

You can be injured by a monk seal that is seeking human attention or food. A female monk seal might have to be removed from the wild because it’s being too “friendly” with people and posing a public safety risk. If this happens, it results in one less female being able to give birth to pups (up to 14 over the course of her lifetime). The recovery of the population of critically endangered monk seals is dependent on each member of the population surviving to adulthood and reproducing.

Responsible wildlife viewing helps to ensure your safety and the monk seal’s protection and long-term survival in the wild. To report marine wildlife emergencies, including monk seals, please call NOAA’s state-wide hotline: (888) 256-9840. Thank you for helping save one of Hawai‘i’s endangered species!

Last updated by Pacific Islands Regional Office on May 29, 2020