For Teacher Appreciation Week, we highlight the dedicated educators who inspire stewardship of Alaska’s ocean and watersheds. 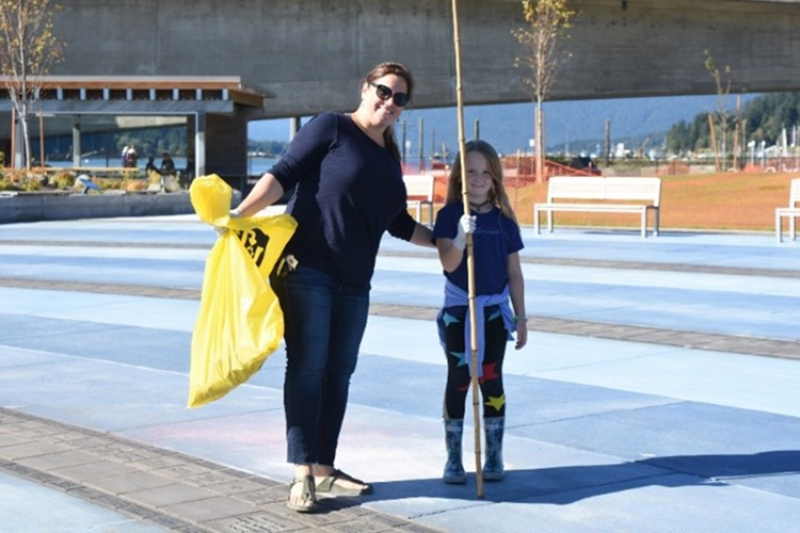 NOAA’s Ocean Guardian Program works with schools throughout the country to promote the conservation of local watersheds, the ocean, and places like national marine sanctuaries. Each school creates local projects to create environmentally sustainable events and programs that benefit the community and our planet.

In Alaska, the program began in Juneau and has spread to Anchorage, inspiring the next generation of students to care about our shared waterways.

She and her supervisor, Aleria Jensen, approached educators at two schools in Juneau who enthusiastically wanted to join the program. Thunder Mountain High School and Sayéik Gastineau Community School both began the Ocean Guardian Program during the 2018–2019 school year. They had no funding, but the community quickly rallied to help. The Southeast Alaska Fish Habitat Partnership donated funds to help launch the programs, and students also participated in Litter Free to raise money. NOAA Fisheries provided some staff time to advise the schools and made presentations to students about the effects of marine debris on ocean animals and habitats. In 2019, Thunder Mountain High School and Sayéik Gastineau Community School became the first Ocean Guardian Program Schools in Alaska!

Since then, new schools have joined each year: Juneau’s Floyd Dryden Middle School in 2020, and Montessori Borealis in 2021. In 2022, Dimond High School in Anchorage joined as well. There are a total of six schools participating in the Ocean Guardian Program across Alaska. And to help, NOAA Fisheries provided classroom assistance from two Alaska SeaGrant Fellows, with another starting next year. For those interested in their school becoming an Ocean Guardian School, applications for 2022–2023 are now open!

On top of a full teaching load, coaching sports, family responsibilities, and being all-around superheroes, the Ocean Guardian Program teachers have gone above and beyond to instill a love of the marine environment in their students and run each program for their schools. For Teacher Appreciation Week, we’d like to highlight just a few of the amazing teachers who shine in the Alaska Region’s Ocean Guardian Program.

Kristen Wells, of Thunder Mountain High School in Juneau, has been a forerunner for the Ocean Guardian Program. She and her students initiated a school-wide recycling program, recycling 15,000 pounds of waste, and created an Ocean Guardian School Program club. They are also working with the local school board to implement recycling city-wide in Juneau.

Monika Haygood, of Sayéik Gastineau Community School in Juneau, has also been a part of the program since its Alaska inception in 2018. She and her students helped make the switch from plastic to real cutlery, preventing plastic debris from being thrown away unnecessarily. They have also composted more than 3,200 pounds of food to further reduce waste at the school.

Jessica Cobley took over this year as lead teacher for the Ocean Guardian Program at Juneau’s Floyd Dryden Middle School. There are already 40 children in the program. During this first year, they completed a waste audit at the school and are now disposing of their food scraps at a local chicken farm—benefiting both the school and the chickens!

Catherine Walker, of Dimond High School in Anchorage, is also in her first year with the program and has a slew of projects planned! After already collecting 107 pounds of trash from  around campus, she and her students completed a beach cleanup at Whittier collecting more than 120 pounds of trash. They have also started a recycling program at the school.

Tom Schwartz, of Montessori Borealis in Juneau, has already set up a school garden and campus composting. He was given a grow cabinet where students are now growing their own lettuce and basil—all in their first year in the program! Tom also recently led a cleanup where 7th and 8th graders collected over 35 pounds of trash from the Gastineau Channel.

These effective conservation projects would not have transpired without the vision and dedication of these amazing teachers. They are making a difference for their students and the ocean with their inspiring work!

Last updated by Alaska Regional Office on May 06, 2022