After a two-year hiatus, reef construction is back in action, thanks in part to NOAA funding. 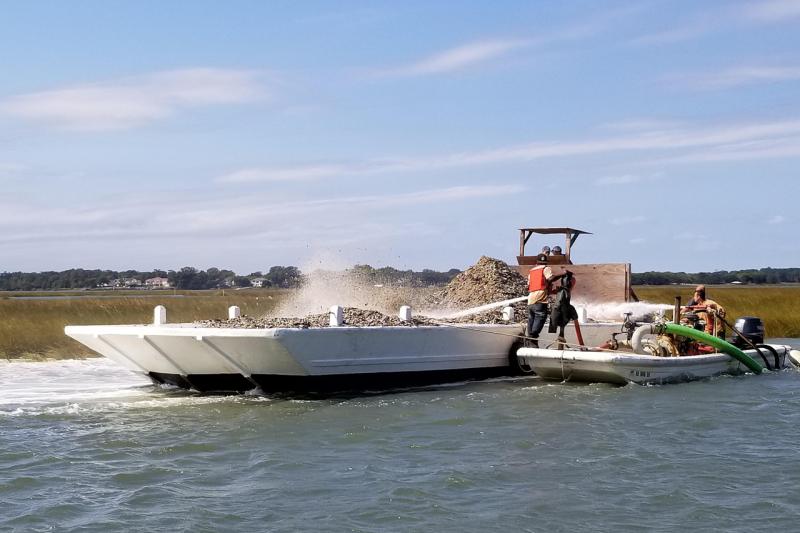 It has been roughly two years since construction of restored oyster reefs was under way in Virginia’s Lynnhaven River, but thanks to NOAA funding, that project is back in action. Construction in at least two sites in the river recently got under way, using hard substrate and fossil shell to build the hard reefs on which spat—baby oysters—settle.

The Hampton Roads Oyster Restoration Workgroup, which coordinates the large-scale oyster restoration project in the Lynnhaven, developed a “blueprint” to guide oyster work there. That plan calls for 154 acres of healthy oyster reef in the river. Initial surveys indicated that 36 acres of healthy oyster reef already existed, and 54.6 acres have been restored thanks to the combined efforts of the U.S. Army Corps of Engineers, Virginia Marine Resource Commission, and Lynnhaven River Now—leaving 61.4 acres to restore.

The current construction aims to restore between 10 and 12 acres, bringing the effort significantly closer to its goal. Roughly $575,000 in NOAA funding—from the NOAA Chesapeake Bay Office, Office of Habitat Conservation, and Habitat Protection Division—enabled the Virginia Marine Resources Commission to contract with a company to do this work.

Additional efforts toward the 154-acre goal—including a project funded by the National Fish and Wildlife Foundation and implemented by the Chesapeake Bay Foundation and Lynnhaven River Now, as well as work by the U.S. Army Corps of Engineers—are slated for spring 2020.