For the first time, scientists are satellite-tracking seal pups this summer as part of an ongoing study to learn about possible effects of ship traffic on harbor seal populations in a glacial fjord. Now results are coming in - with some surprises. 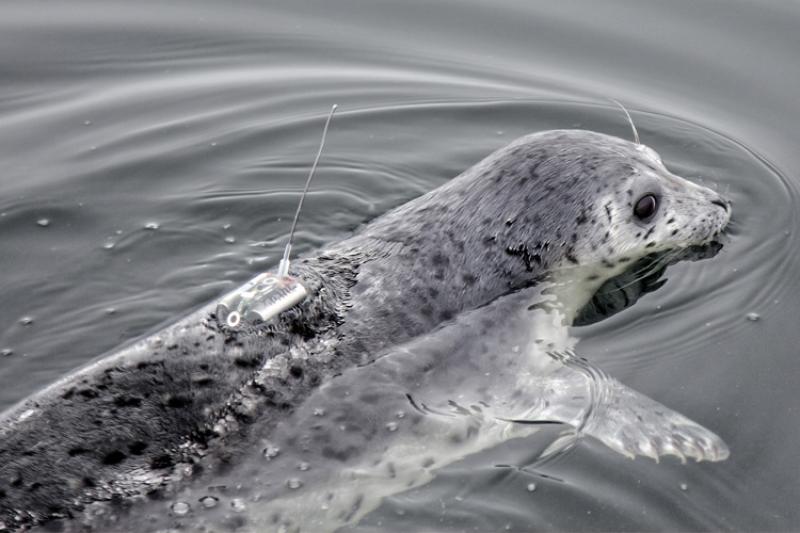 For probably a thousand years, harbor seals have raised their pups in the shelter of Disenchantment Bay. For nearly as long, the Yakutat Tlingit Tribe has relied on the seals as an important part of their diet and culture. In recent decades, increasing numbers of cruise ships began touring this glacial fjord, where passengers might witness a four-story iceberg calving from Alaska’s largest tidewater glacier.

Now a team of scientists is working to make sure seals and humans can continue to coexist in this unique and essential habitat.

The team put Argos satellite tags on 45 seal pups in June as part of an ongoing study to find out how cruise ship traffic affects their behavior, which could have implications for the growth and survival of harbor seals in this glacial fjord. Now the tagged pups are transmitting detailed information about their movements and environment, and that is a game changer.

“In the past we’ve done aerial surveys of the whole population, getting the big picture. Now we are able to get detailed behavioral information on individual seals. That means we can begin to close the information gap on whether disruption by cruise ships affects seal populations,” says marine mammal biologist John Jansen of NOAA’s Alaska Fisheries Science Center. “We know that seal behavior is disrupted if ships get too close, and we know what distance is too close, but we don’t know if that disruption could have a negative impact on the harbor seal population.”

At the same time, they are tracking pups, the team is monitoring and mapping vessel traffic. With this information, they can figure out how vessel traffic distance and frequency corresponds with pup behavior. The results will help resource managers determine whether further action needs to be taken to minimize disturbance by vessels.

Jansen is co-leader of this collaborative research with other scientists from NOAA Fisheries, the National Park Service, University of Alaska Fairbanks, and The Marine Mammal Center. The town of Yakutat has provided support including landing craft for deploying the ship tracking system, and the local Tlingit tribe has collaborated and contributed traditional knowledge.

“They hunt seals for subsistence from childhood and know a lot about seal behavior and where they typically haul out. That knowledge helped shorten our learning curve in the field,” Jansen says. 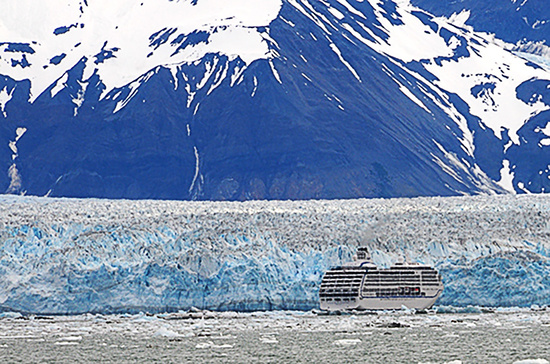 Cruise ship goes in for a close view of Hubbard Glacier in Disenchantment Bay, Alaska. During summer, up to four ships on a given day may transit seal habitat that is important for pupping.  - Photo by: John Jansen, NOAA Fisheries

Harbor Seals in a Jam?

For a harbor seal pup in a glacial fjord, resting on ice is a necessary part of growing up.

When a pup rests on an ice floe it is saving energy. Because it stays dry, the pup uses little energy to stay warm, and can instead use the energy from mom’s milk to grow and gain the blubber needed to survive the winter.

A pup in the cold glacial water spends energy to stay warm. If it spends too much time in the water, it can fail to grow and fatten up, and that has serious consequences.

“Glacial seals have unique challenges. The water in glacial fjords is much colder than in other environments where harbor seals aggregate. When you spend time in this water, you lose more energy,” Jansen explains. “Pups in other environments might normally spend 40-70% of their time in the water. But if glacial pups spend more than 50% of their time in the water, they might divert more energy to keeping warm and end up weighing less than other pups at the end of summer. If pups go into their first winter at a lower weight, they are less likely to survive.”

That’s how disruption by vessel traffic could affect seal populations. When a ship gets too close, a harbor seal pup dives for safety into the water. If ships get too close too often, the pup spends too much time in the water, and not enough time resting on ice, growing and gaining blubber before winter.

An advantage of glacial sites is the floating ice that allows pups to spend more time out of the water compared to those using tidally-flushed rocks or sand bars. This may explain why Alaskan glacial areas have some of the largest aggregations of harbor seals in the world and may be akin to nurseries: ideal habitat.

In the late 1980s fewer than 12 cruise ships a year visited Disenchantment Bay. By the late 1990s, 130-140 ships were touring the fjord each summer. Around that time the local Tlingit tribe expressed concern that the seal population in the bay was declining.

“We began this work in response to their concern,” says Jansen. “Our previous work allowed us to document short-term reactions of seals to ships, but the missing piece is whether those reactions affect the population’s long-term stability. The work we are doing this year and next will begin to answer that question.” 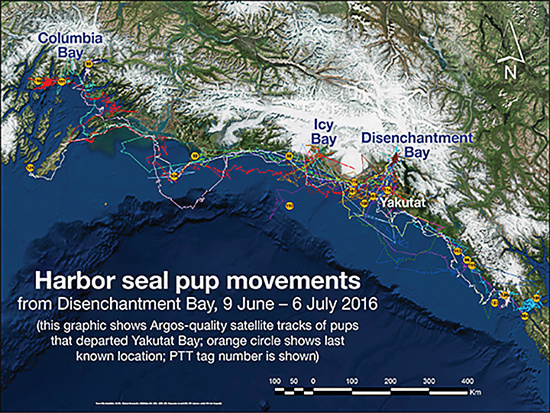 The pups that were tagged in June are now transmitting their locations via satellite, and the initial results are already expanding our understanding of harbor seal behavior.

“Harbor seals, especially juveniles, are known for making some pretty lengthy migrations. But we are surprised at how far very young pups are venturing out—hundreds of miles,” Jansen says.

Twenty pups have already ventured outside of the shelter of Disenchantment Bay. Some headed north out of the bay, others south, with no obvious pattern other than mostly staying close to shore. Some visited Icy and Columbia bays and “got a taste of life in another glacial bay.” One pup left Disenchantment Bay, out to sea, then came back--“maybe a training trip with mom,” says Jansen.

These results are a preliminary look at pup movement and behavior. The main focus of the study will be the period before pups wean and leave Disenchantment Bay. The team will find out how much time each pup spends resting on ice versus swimming in water. They will compare this data with the level of ship traffic that each pup is exposed to. Using estimates of how much energy pups use in and out of the water, they will determine whether disturbance by ship traffic is likely to affect pup growth, and therefore jeopardize pup survival.

“We’re also interested in the possible emigration of these pups and whether they come back to Disenchantment Bay next spring” says Jansen. “With any luck (and enough battery life) these satellite tags will answer that question, transmitting the pups’ locations periodically for their whole first year of life.”

What if cruise ship traffic does play a role in the decline of harbor seals in Disenchantment Bay? The solution is simple, according to Jansen: give the seals space. In response to concerns about disruption, NOAA has recently implemented new vessel approach guidelines, suggesting that cruise ships keep a voluntary 500 meter distance from seals resting on ice, as well as avoiding particular areas and times when seals typically haul out on ice. Jansen reports anecdotal evidence that cruise ships are respecting that distance. “We saw ships entering and leaving the bay on the far side of Haenke Island, away from the area where seals usually haul out.”

Maybe the solution is already underway.

*Note: Photos collected under the authority of MMPA permit No. 19309

Last updated by Alaska Fisheries Science Center on May 23, 2019