Scientists and fishermen are working together to gain new insight into seasonal movements of valuable Pacific cod. 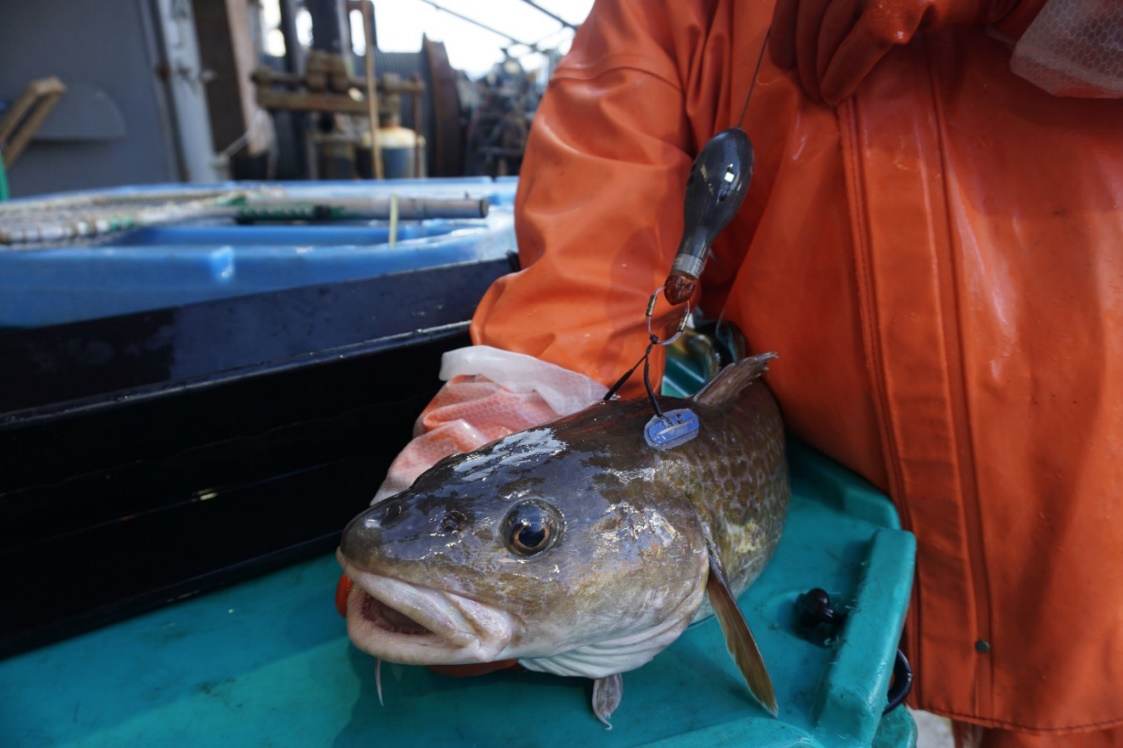 Last winter scientists and fishermen partnered to launch a pilot study to develop methods for tagging cod on working commercial fishing vessels. Satellite tags had never been used on Pacific cod. No one had recorded seasonal movements of cod in the Aleutian Islands.

This project is something that many of us have been interested in seeing happen for a long time. Though we have fished in this area for decades, almost nothing is known about the migration of these stocks. Where do they come from? Where do they go? It is vital to fisheries management and fishermen alike to know as much about the movement and habitat of these fish as possible.

The involvement of our vessel and crew in the actual research provides the platform and expertise to help assure its success.  Our team is well versed in the logistics of gear deployment and retrieval in these harsh elements, and also have an established working relationship with the people from NOAA. This combination is critical to assuring a safe and effective operation.

Pacific cod is the second most valuable Alaskan groundfish fishery and a key species in Alaskan ecosystems.

Aleutian Islands cod are a distinct population living in a unique environment. While Bering Sea and Gulf of Alaska cod stock abundances have changed dramatically in recent years, the Aleutian stock has remained stable. This is likely due to the physical oceanography around the islands that maintains relatively cool, constant temperatures in a warming ocean.

Like other Alaskan cod populations, the Aleutian stock supports a valuable fishery.

Pacific cod are known to migrate long distances seasonally—as far as 1,000 kilometers in the Bering Sea. However, little is known about the movements of the Aleutian Islands cod population.

Understanding seasonal migration patterns is essential for sustainable management of any fish stock. For Aleutian cod, it would also solve an ongoing  question.

“Fishermen catch big cod in their Aleutian spawning grounds during the winter fishery. The NOAA Fisheries stock assessment survey catches a wider range of sizes—large and smaller fish—in the summer, ” said David Bryan of the Pacific States Marine Fisheries Commission, co-leader of the study with Alaska Fisheries Science Center colleague Susanne McDermott. “Why are they different? ”

According to McDermott, there are a few possible explanations for this:

“Our study will track tagged cod from the winter fishing grounds to see where they go in the summer,” Bryan said. “That will be a step toward answering these questions and better understanding the movements of different life stages of cod in the Aleutians.”

The study is a cooperative effort between the Alaska Fisheries Science Center, the Adak Community Development Corporation, B&N Fisheries, and other members of the Pacific cod fishing fleet.

Dave Fraser of the Adak Community Development Corporation explains why this research is important to the local fishing community.

Cod is the primary species that supports the operation of a shorebased processing facility in Adak, and the processing plant in turn is the primary driver of the Adak economy.  Given the importance of cod to the sustainability of our community, it is critical that the AIeutian Islands cod stock is itself sustainably managed.

We have long been aware that the size and age distribution of the winter season commercial fisheries cod catch differs dramatically from that of the summer trawl survey,

Depending on the reason for that difference, we could be either under- or overestimating the stock size and the Allowable Biological Catch.

A tagging study had the potential to answer our questions. Together with several Aleutian Islands cod fishing companies, Adak Community Development Corporation supported a proposal to the North Pacific Research Board to fund this cooperative project. 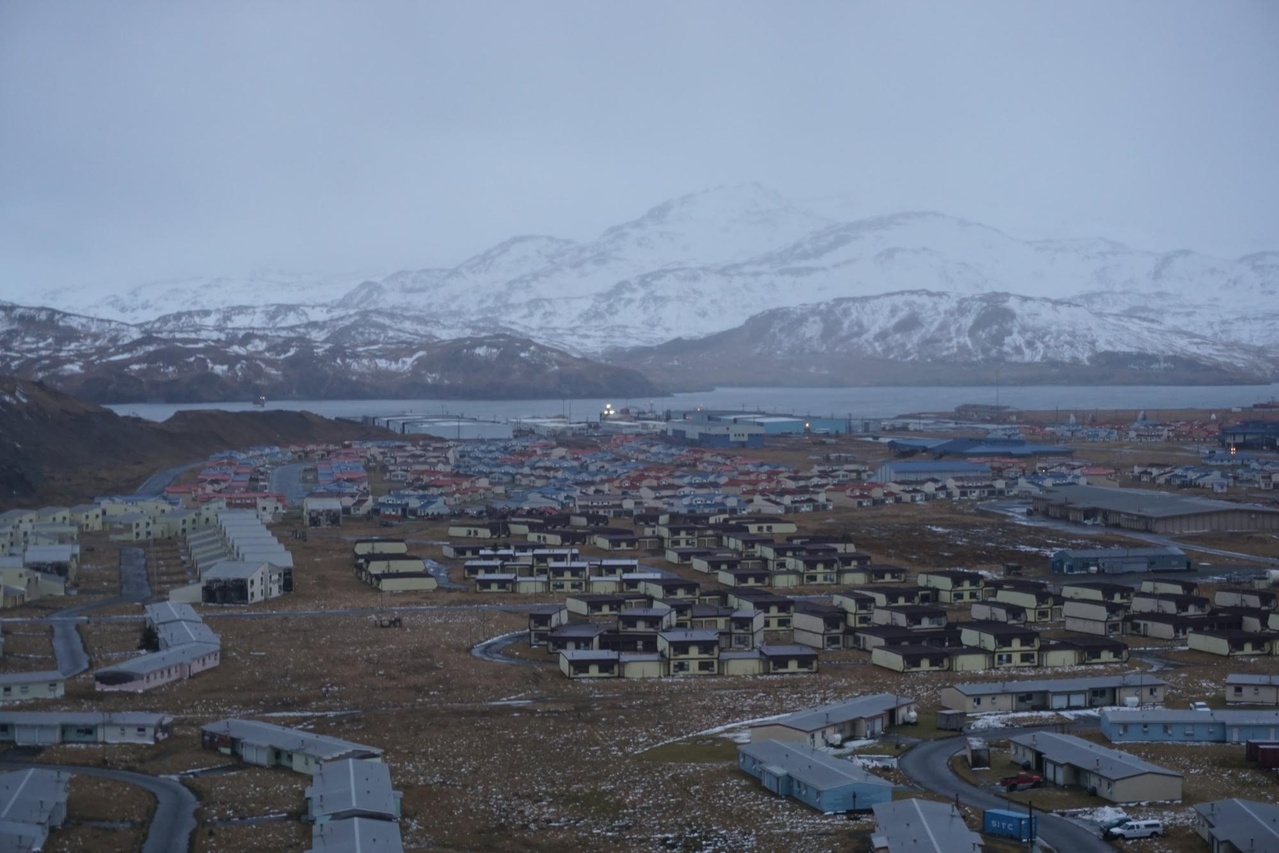 The main purpose of the pilot study was to develop methods to tag Pacific cod with pop-up satellite tags aboard working commercial fishing vessels.

“We needed to make sure the tags worked, and that we could release them from commercial boats during fishing operations,” Bryan said. “Would we be able to  catch, tag, and release the cod alive? Could we work with fishermen while they are fishing, and not get in their way?”  Successfully working from commercial boats during fishing season would significantly decrease the costs of a large tagging experiment in the future. 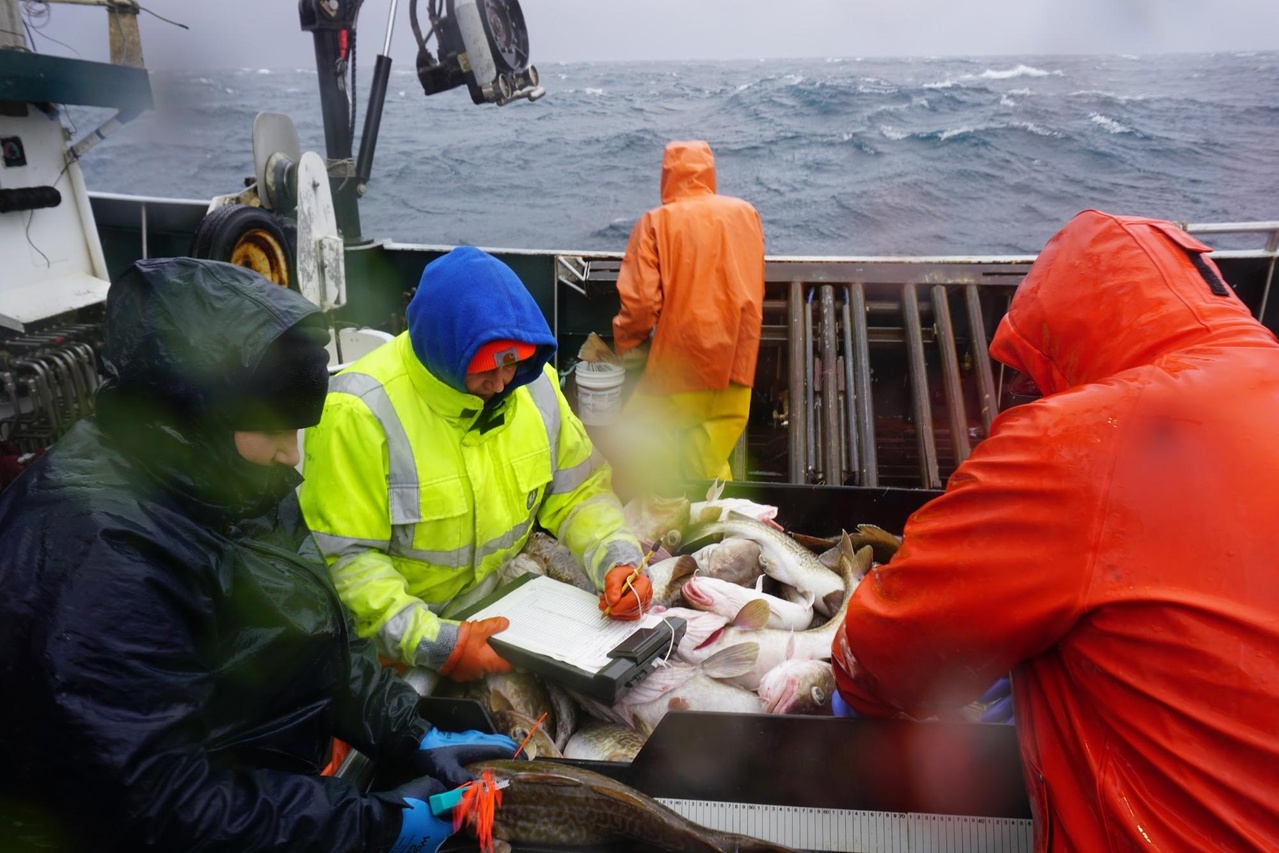 Susanne McDermott works with the crew of the F/V Deliverance to tag cod with conventional tags. Photo: NOAA Fisheries.

A secondary purpose was to collect data on age structure, length distribution, genetic origin, and spawning condition of the fish in the region.

The fishing industry provided financial support to buy the high tech satellite tags for the study. John Gauvin of the Alaska Seafood Cooperative organized the collection of these funds, and advocated for the North Pacific Research Board to support an Aleutian Island Pacific cod tagging project.

“With the smaller pot vessel we were able to tag cod close to shore, in areas that we couldn’t have gotten to from the larger trawl vessel. With the Ocean Explorer we went further offshore,”  McDermott said. “Both vessels provided sea time and expert personnel at no cost.” 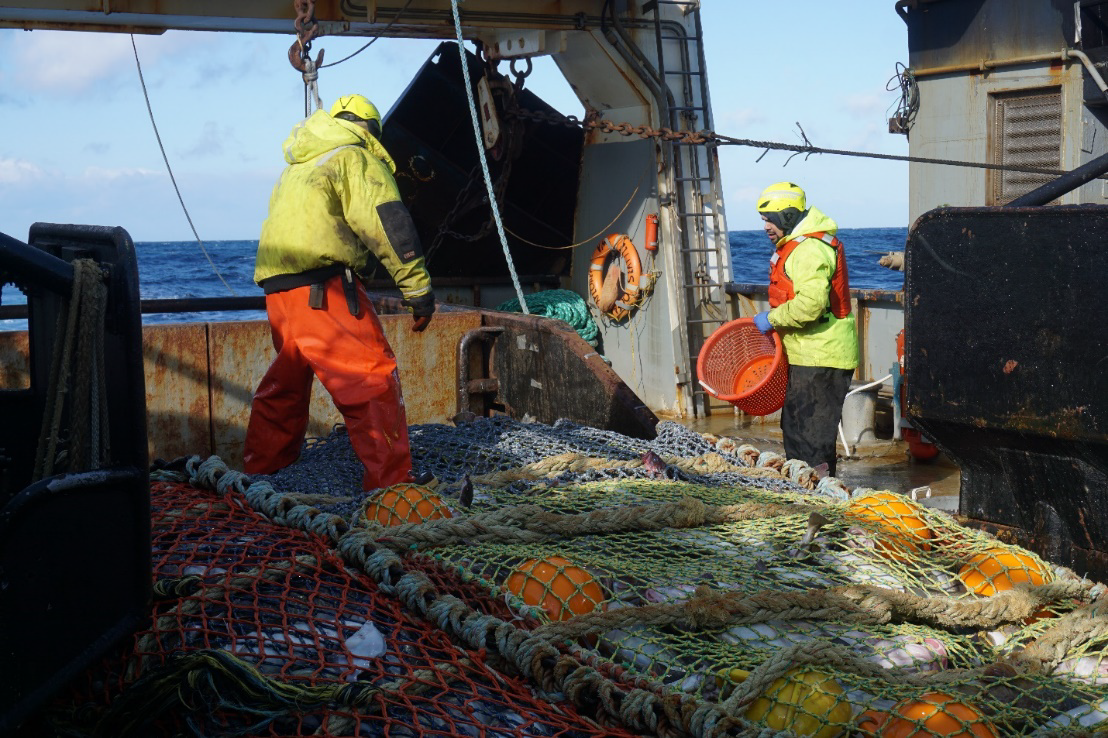 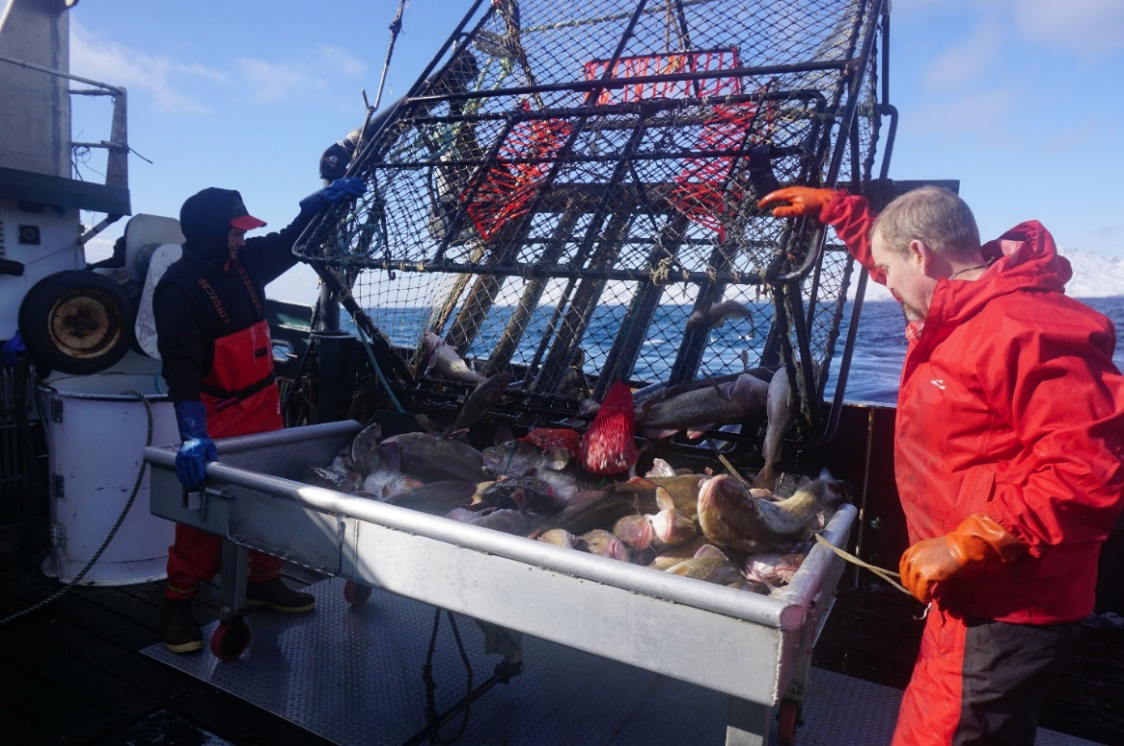 In addition to the tag release at sea, Bryan, McDermott, and Fraser collected more than 300 length measurements as well as other biological data.

“The pilot study showed that this kind of collaboration works really well,” Bryan said. “We can work with fishermen without interfering with fishing operations. We can apply their knowledge and use cutting-edge technology to better understand key patterns of movement for commercially important fish.”

It was important to me to learn as much as possible about the spawning characteristics and where cod travel to and from when spawning. I have my own concerns about the overall health of cod in the Aleutians. I thought this would clarify some of those. And it was really fun working with Susanne and Dave. 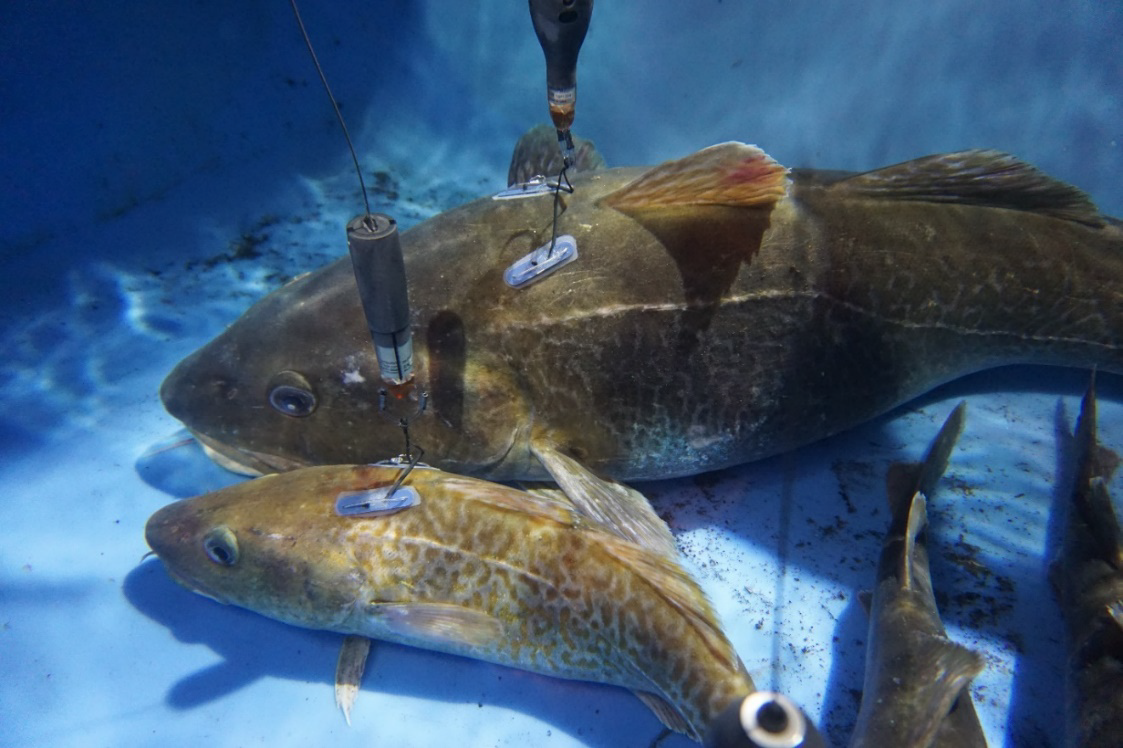 Where the Fish Go

“Pop-up” satellite tags are programmed to detach from the fish on a predetermined schedule. Each tag then floats to the surface and begins transmitting data about one fish’s journey.

“That’s the most exciting thing—finding out where the fish go,” said Bryan.

Not all of the tags have popped yet. Some are scheduled for later. A few of the largest tagged fish died. The team suspects larger fish may be more susceptible to trauma from being brought up from depth.

But the tags that have surfaced have revealed the first, sometimes surprising, information about where cod go when they leave their winter spawning grounds.

Seven of nine fish went straight to Seguam Pass. One went far west to Petrel Bank—a distance of over 400 kilometers. 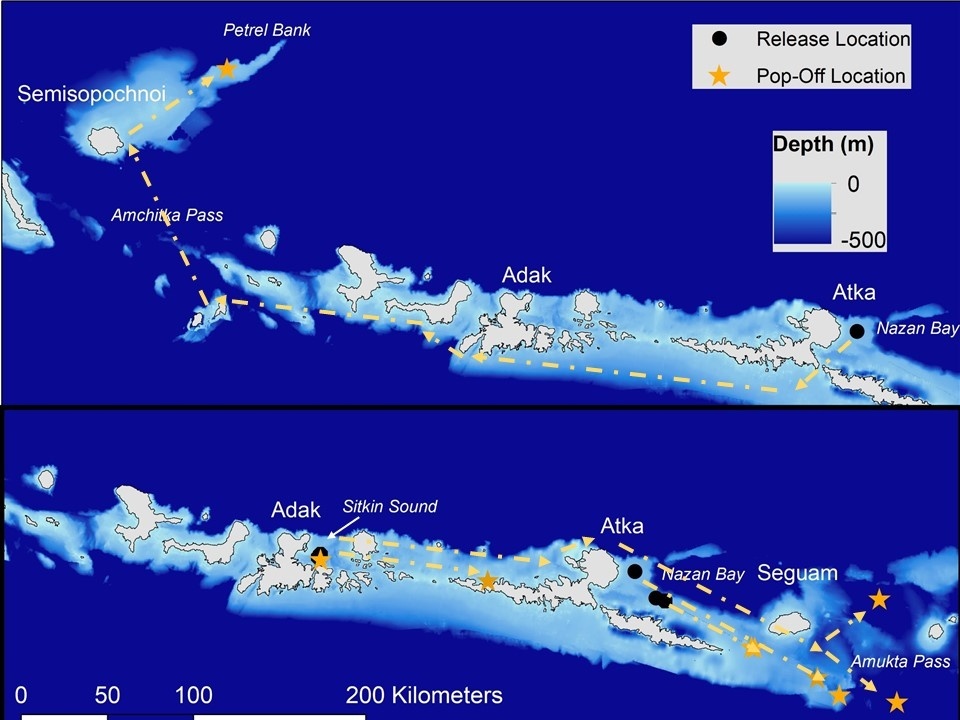 “The fish that went to Petrel swam across deep cuts without going to the bottom. We didn’t know if they could do that, but that one did. Cod usually hang near the bottom, at least in the Bering Sea,“ said Bryan. “But again, the Aleutians are a different environment.”

“What is really fascinating is that the fish went directly from the spawning grounds to feeding grounds within weeks,” McDermott said. “Both places that they went have major Atka mackerel aggregations. They could be prey for larger cod. We plan to find out if we have stomach data from those areas to see if the cod there are eating Atka mackerel.”

The tags recorded a great deal of vertical movement as well as long distances travelled. On average, the fish rose and descended 200 feet daily. 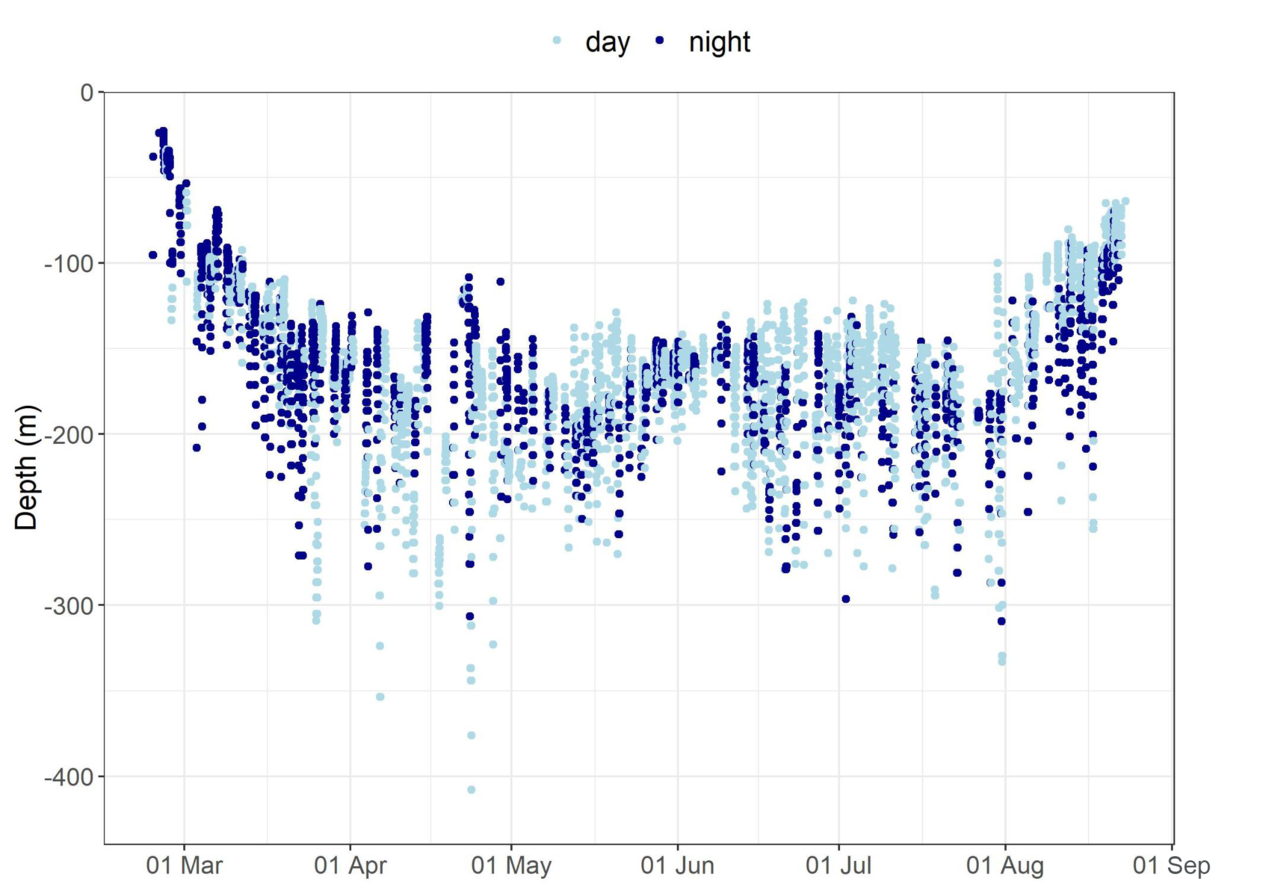 Time series depth profile of a Pacific cod that swam from Sitkin Sound to an area south of Seguam in 180 days. Dots show individual depth measurements. Colors show whether the depth was recorded during day or night. Notice the large changes in depth that take place every day. Image credit: NOAA Fisheries.

“These ups and downs may suggest that the fish are traveling in rocky, steep, untrawlable areas. That would be an interesting finding, if they are spending time  where the survey vessels can’t go,” Bryan said. 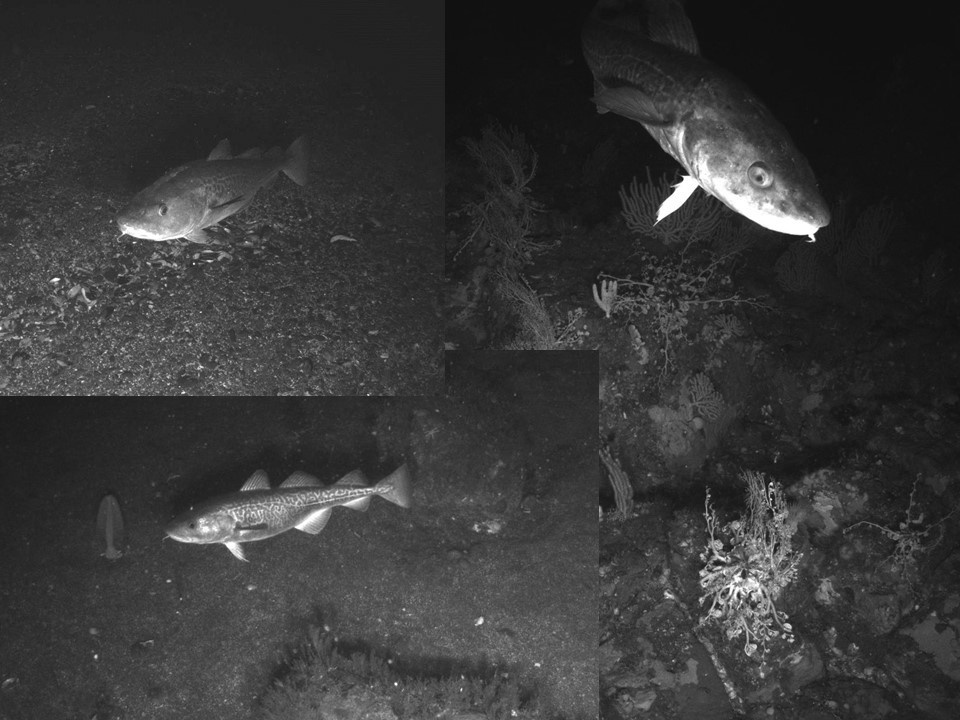 More tags will be popping up soon. One is scheduled for this month; four at the end of February—one year since they were released.

“Will they show back up at the spawning site where we tagged them?” McDermott asks. “Spawning aggregations have gathered at both Nazan Bay and Adak for many years. Fishermen can return to the same spot every winter to fish. We are learning more and more that many fish home to specific places to spawn. It will be very interesting to see if they come back to the exact place we released them. “

As for the reason for the size difference between winter fishery and summer survey cod, the answer is just beginning to emerge.

“In the future, as more tags are released and we track more fish, we will have a better understanding of the migratory pathways of bigger fish and whether they  are spending time where surveys can’t reach them. We hope to tag some fish in the summer as well, possibly in areas farther to the west,” Bryan said.

“First we need to figure out how big a box these fish are moving in,” McDermott said. “Then we can start unravelling the way their life cycle works.”

This tagging project is part of a broader effort at the Alaska Fisheries Science Center to study the movement patterns of Pacific cod. Bryan and McDermott are also part of a project that tagged 38 cod in the northern Bering Sea. They worked with the Norton Sound Economic Development Council and Alaska Native community members in Savoonga on St. Lawrence Island  in the summer of 2019.  Look for more on the Bering Sea tagging project in an upcoming story.

The Aleutian Island cod tagging project demonstrates the power of partnerships.  In Alaska, NOAA Fisheries and the fishing industry successfully partnered on this and many other projects because each is committed to sustainable management based on sound science. This project was supported by Adak Community Development Corporation, Aleutian  Spray Fisheries, American Seafoods Corp, B&N Fisheries, Freezer Longline Coalition, Golden Harvest, Ocean Peace, Inc., O’Hara Corporation and United States Seafoods.