In celebration of our 150th Anniversary, we are highlighting some of the people who helped build the foundation of fisheries and marine science. Meet Victor Loosanoff, Russian refugee and shellfish science icon. 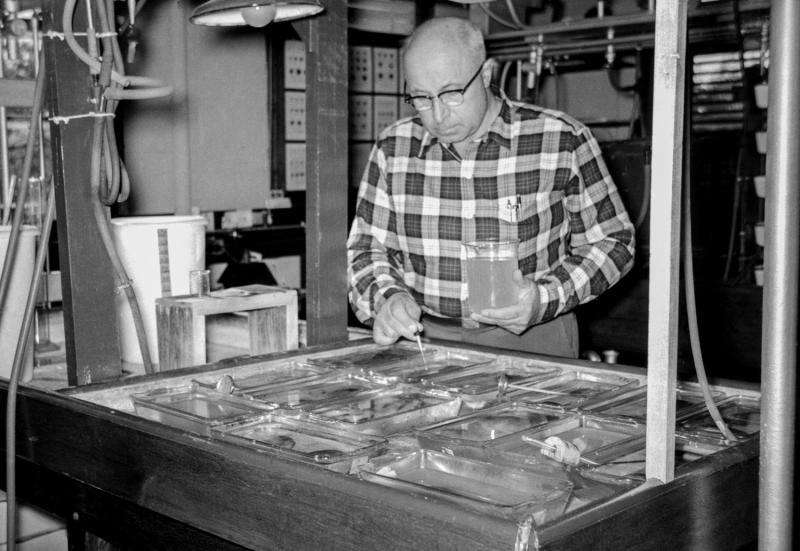 The NOAA Fisheries Milford Laboratory is well known for research on commercially important shellfish, especially the Eastern oyster. The laboratory’s first permanent biologist and eventual director, Victor Loosanoff, began these studies. Born in Kiev, Russia in 1899, Loosanoff was the son of an Imperial Russian Army officer. He served 4 years in the same army as an artillery officer before he fled Russia to escape the Bolshevik Revolution. He came to the United States in 1922 and took jobs in logging and commercial fishing to learn English while earning a degree in fisheries science from the University of Washington.

After graduating, he held positions as a marine biologist with the states of Washington and Virginia. In late 1931, Loosanoff was hired by Paul S. Galtsoff, acting director of the Woods Hole Laboratory, the original NOAA Fisheries Laboratory. Both labs were part of the  Bureau of Fisheries, which was then part of the U.S. Department of Commerce.

Loosanoff’s tenure in Milford, Connecticut, began modestly in temporary quarters on the shore of the Wepawaug River. He eventually moved to a small wooden building provided by a local oyster company.  Federal scientists had conducted oyster research at Milford at the request of the industry beginning in 1917; however, Loosanoff’s arrival marked what would become an enduring institution. Equipped with only an “oyster knife and a microscope,” Loosanoff set out to improve the productivity of the oyster industry — a mission that he energetically embraced.

In the 1930s, oyster growers depended on natural “seed.” These are produced when adult oysters spawn and free-swimming larvae attach as “spat” to hard surfaces, like old oyster shells. Shellfishermen collected natural seed from estuaries and moved the seed to underwater shellfish beds leased from the state, where the oysters grew to a harvestable size. Alternatively, shellfishermen placed clean shells in areas where spatfall was expected. After natural settlement and some growth, shells with spat attached were moved to leased beds.

To successfully collect natural spat, timing is essential. If the shell is placed too early, it becomes fouled by algae and encrusting animals and the oyster larvae won’t set. If the shells are placed too late, they miss the seasonal spatfall. Solving this dilemma was one of the first problems Loosanoff addressed.

Loosanoff devised a clever way to determine when and where oyster larvae settled. He deployed small bags of shell in different locations, measuring environmental conditions at the same time. He identified the conditions that the industry could monitor, allowing for a more methodical and successful approach to seed collection.

Not content to remain behind a desk, Loosanoff frequently spent time collecting data aboard the Connecticut Shellfish Commission’s vessel Shellfish. He routinely engaged with those working on the water. In addition to scientific publications, Loosanoff released “real time” bulletins to the industry, providing advice on planting shell during the spawning season.

When not on the water, Loosanoff spent hours in the lab peering through a microscope to better understand the early life history of oysters and other bivalve shellfish. He devised a way to measure filtration rates and responses to environmental variables. He sought to understand what oysters eat. Importantly, Loosanoff envisioned a process to farm shellfish in a manner similar to livestock or land crops. His research led to the “egg-to-market” shellfish aquaculture practiced widely today.

In 1935 Loosanoff was named director of the Milford Laboratory, and in 1936 he earned a Ph.D. in zoology from Yale University.

Around this time, Congress established a permanent research laboratory in Milford. By 1940, a well-equipped two-story brick laboratory building was completed. Typical of the time, a director’s cottage was built adjacent to the laboratory, where Loosanoff lived with his wife, Tamara, who was also a researcher.

The small laboratory staff increased to include other researchers and scientific productivity grew. In 1951, a 50-foot research vessel was built in New Haven for use at the laboratory. It was named the R/V Shang Wheeler, after Charles “Shang'' Wheeler, a supporter of the lab.

As laboratory director, Loosanoff expected his staff to abide by his rigorous work ethic, and he could be a demanding taskmaster. It was said that he thought of himself as an orchestra conductor with his staff as the musicians. He insisted on steady progress and results from his scientific staff. He had a remarkable ability to identify the pertinent research questions that needed to be answered to advance the shellfish industry into the modern era.

In a 1951 Saturday Evening Post article, Robert Yoder wrote about his visit to the Milford Lab. He interviewed Loosanoff, who hosted the author aboard the Shang Wheeler and described the oyster farming practices on Long Island Sound. The article includes a photo of Loosanoff eating a raw oyster and his claim that after 20 years of researching oysters he had eaten his first only the year before!

In 1962, Loosanoff stepped down as Milford Laboratory’s director after 28 years of service. He and his colleagues published more than 200 scientific papers and articles about the biology of shellfish. His vision and dedication helped make modern shellfish aquaculture a reality.

A Lasting Contribution: The Milford Method

Significantly, Loosanoff and his team developed methods to artificially spawn and rear shellfish in a hatchery. Research revealed how laboratory manipulation of seawater temperature could induce gamete production out of season. It could stimulate spawning of eggs and sperm, fertilization of eggs, and the culture of embryos and larvae. They devised methods to grow large quantities of the microalgae, necessary to feed the growing larvae. This new protocol allowed the free-swimming larvae to pass through metamorphosis and settle as tiny versions of the adults.

Loosanoff combined previous science and innovative ideas to demonstrate a hatchery for shellfish production. This new approach to shellfish cultivation became known as the “Milford Method,” which is still used worldwide.

Today, growers obtain oyster seed from hatcheries and plant them in natural waters, protected from predators in cages or by netting. This method of shellfish farming has expanded rapidly in all coastal waters of the United States and the world. Much of the recent resurgence of availability and popularity of oysters is a result of these aquaculture practices.

Coastal shellfish aquaculture is an environmentally friendly endeavor, because shellfish help remove excess nutrients from seawater, which otherwise can contribute to algal blooms. Eating shellfish that are “low on the food chain” also presents an ecologically-sound alternative to more energy consumptive types of food production.

Today, NOAA Fisheries scientists at the Milford Laboratory continue to conduct state-of-the-art science that informs management for the sustainable expansion of aquaculture, provide services to the shellfish aquaculture industry, and advance new technologies through collaborative research.

This article was adapted from a manuscript written by retired Milford Laboratory scientist Ronald Goldberg.