We conduct research in support of endangered U.S. Atlantic salmon populations and the ecosystems these iconic fish inhabit. 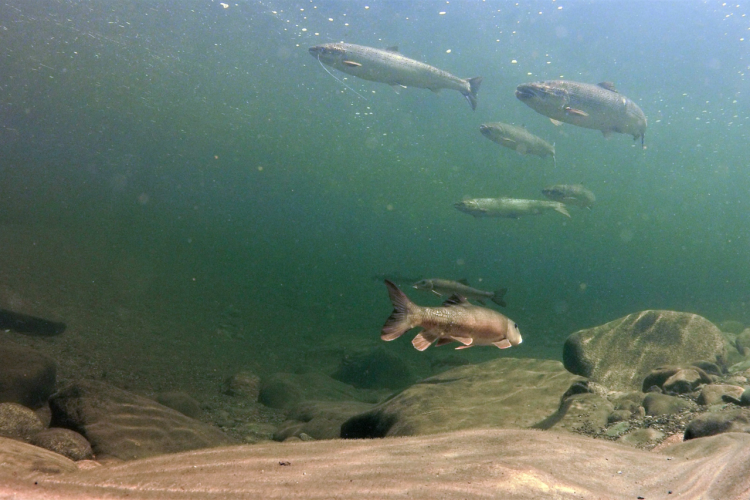 Atlantic salmon—also known as the “King of Fish”—spend part of their lives in both fresh and saltwater. Their relatively complex life history begins with spawning and rearing juveniles in rivers. Then they migrate to saltwater to feed, grow, and mature before returning to freshwater to spawn.

Wild Atlantic salmon population levels are very low due to a variety of factors, including habitat destruction, dams, and historic overfishing. Atlantic salmon once returned by the tens of thousands to most major rivers along the northeastern United States. Now, they only return in small numbers (<2,000) to rivers in Maine.

We study these salmon, their movements, and the ecosystems where they live to better understand how to recover their populations.

The Atlantic Salmon Ecosystems Research Team (ASERT) studies the dynamics of U.S. Atlantic salmon populations in a variety of areas: Maine rivers and estuaries, the Gulf of Maine, the Northeast shelf into the northern Labrador Sea, and Coastal Greenland. 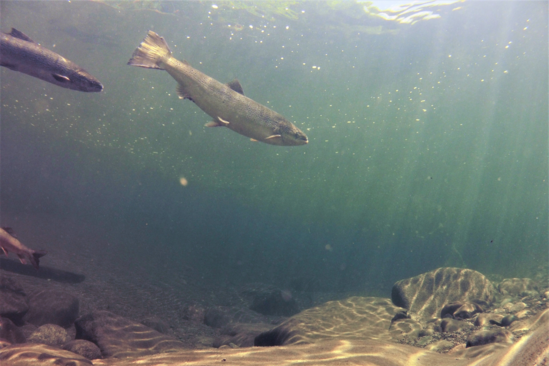 We focus on endangered U.S. Atlantic salmon populations and the ecosystems where these iconic fish live. An essential part of these ecosystems is the diadromous fish community, which includes river herring, American shad, rainbow smelt, and eight other species.

An acoustic transmitter (“pinger”) is surgically implanted into an Atlantic salmon smolt as part of a telemetry study on the Penobscot River, Maine. ASERT annually tags between 50 - 200 smolts for acoustic telemetry studies.

We place acoustic tags in fish and receivers in the environment to track Atlantic salmon seaward movements. This information helps us identify where and when fish are located in rivers, estuaries, and coastal environments prior to entering the Gulf of Maine.

We collaborate with the Ocean Tracking Network and U.S. Animal Telemetry Network. These partnerships extend our network south to Florida and north to Labrador, Canada.

The U.S. Atlantic Salmon Assessment Committee (USASAC) monitors the population status of U.S. Atlantic salmon. This committee is a team of state and federal biologists tasked with compiling and annually reporting data on the species throughout New England. Historically, the USASAC stock assessments were aligned with NOAA Status of Stocks documents. They focused on adult returns in all U.S. population groups including Long Island Sound, Central New England, Outer Bay of Fundy, and the Gulf of Maine.

In 2013, overall U.S. salmon conservation efforts were contracted from two restoration programs in the Connecticut and Merrimack rivers. Now, the Maine program that supports recovery of endangered Gulf of Maine Distinct Population Segment is the largest U.S. program. The continuing efforts in the Connecticut Legacy Program and Saco River in Maine have limited monitoring. The status of these two programs are synthesized in Long Island Sound and Central New England sections. Current assessments focus on a viability assessment of the Gulf of Maine Distinct Population Segment. The Viable Salmonid Population approach measures population abundance, growth, spatial distribution, and genetic diversity.

Our scientists partner with educators and outreach professionals to develop educational tools for K-12 students. They provide information about threats to salmon and the methods we use to study salmon survival and migration.