The Passive Acoustic Research group in the Northeast collaborates with national and international agencies on multiple projects.

Our Passive Acoustics Research Group works with partners around the world to understand more about sound in the ocean. 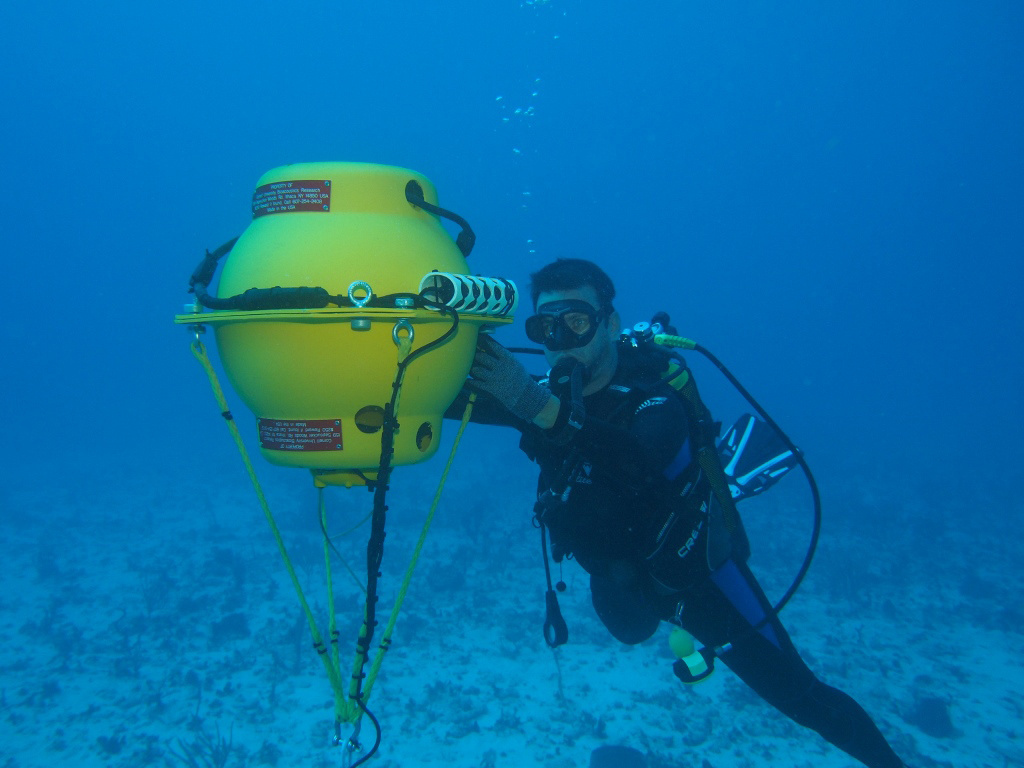 Jeremy Kiszka of Florida International University checks on one of the Marine Autonomous Recording Units (MARUs) deployed in the Caribbean in 2017 to record humpback songs and other ocean sounds.

The inaugural field season of the Caribbean Humpback Acoustic Monitoring Program (CHAMP) ran between December 2016 and May-June 2017. We sent two teams to the area to work with local collaborators. Our teams deployed a total of ten recording devices in the waters off:

We also worked with the Sea Education Association to make additional recordings during their "Colonization to Conservation in the Caribbean" program.

In our first field season we used two different passive acoustic monitors during our fieldwork, the Marine Autonomous Recording Unit and the SoundTrap. In May and June of 2017, all recorders were successfully recovered. With passive acoustic recorders throughout the Caribbean we are able to monitor humpback whale distribution. We assessed seasonal differences in arrival and departure of the whales, and analyzed the content and structure of the whales' song.

We would like to thank everyone involved including all our international collaborators, supporters, and local site leads who made the first CHAMP field season possible:

This project is supported by funding from NOAA as well as in-kind support from the Dominican Republic's National Authority for Maritime Affairs, the Aruba Marine Mammal Foundation, the Bonaire National Marine Park and National Office for the Caribbean Netherlands, the Dutch Caribbean Nature Alliance, the Observatoire des Mammifères Marins de l'Archipel Guadeloupéen, the National Park of Guadeloupe, the Natural Reserve of St. Martin, and the Sea Education Association.

We collaborate with Parks Australia to assess the presence of vessels in protected Australian Marine Parks.

Parks Australia is developing an acoustic monitoring program using SoundTraps. The program’s main goals are to better understand how small vessels use Australian Marine Parks and to inform compliance risk planning and management.

An example of a spectrogram with humpback whale song and sounds of breaching or tail slapping. Play audio

Australian Marine Parks offer protection for hundreds of species, ranging from blue whales to critically endangered grey nurse sharks and thousands of fish. National Park Zones of Australian Marine Parks prohibit fishing and many other commercial activities to preserve habitats and protect species. Passive acoustics can be used to differentiate vessel behaviors in the marine soundscape.

We combine data collected through passive acoustics with environmental variables (such as lunar phase or wind speed) or human constructs (such as weekends versus weekdays). This helps us identify factors that may influence when illegal vessel activities occur.

From the pilot data alone, we detected 240-364 discrete vessels near the three recording sites. Using sound propagation modeling, we detected 43 separate vessels within the boundaries of Solitary Islands Marine Park at Pimpernel Rock during the months of August and September 2018. We were also able to inform Parks Australia of conditions that may lead to more illegal activity in these sites. Vessels found within Solitary Islands Marine Park at Pimpernel Rock were most common on weekdays (Tuesday through Thursday) and were most commonly within park boundaries between 05:00 and 18:00 AEST. Peak times occurred between 15:00 and 18:00 AEST. Vessels were also more likely to be within the park when wind speed averaged less than 20 km/hr across consecutive days.

Identifying vessel activity trends allows Parks Australia to allocate limited compliance resources to marine parks where and when risk is likely to be high. Furthermore, using remotely sensed acoustic data for monitoring enhances our understanding about the Australian marine soundscape without needing daily human presence at each site. Through this international collaboration we hope to help Parks Australia efficiently monitor their ecologically important ocean resources.

Concurrent to monitoring vessel activities, we are also assessing principle biological factors that make up the acoustic scene at each of the marine parks. So far, we have found evidence of humpback whales, dolphins, snapping shrimp , and fish “chorusing” (making sounds together as a group).

We can also evaluate 24-hour and daily presence of species at the recording sites. Periodic assessment of sound composition shows us trends. For instance, we note two distinct fish choruses (one in the morning and one in the evening) at the East Pimpernel and West Pimpernel sites of Solitary Islands Marine Park.

With this analysis we provide Parks Australia with a snapshot of their marine acoustic scene. This information gives us insight as to which species are transiting through or near Australian Marine Parks and so are at risk of interacting with illegally present vessels.

The coastal waters off the U.S. Northeast coast are used in many ways. This includes cargo ships traveling to Boston, New York, and Portland (Maine); whale-watching; recreational boating; recreational and commercial fishing; and other commercial activities. The increasing amount of noise from human sources is a rising concern. It has the potential for multiple negative impacts on marine ecosystems and organisms. Many human activities generate high levels of underwater noise which can interfere with the ability of animals to communicate with one another. This phenomenon is known as "communication masking." It is a particular concern in urbanized coastal environments like the coastal waters off the U.S. Northeast coast. 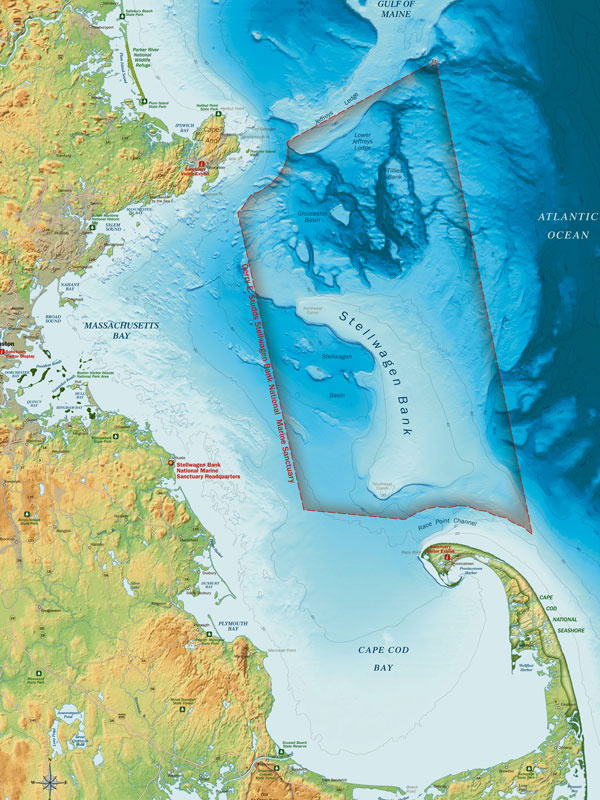 Since 2006, we have worked closely with scientists at the Stellwagen Bank National Marine Sanctuary. The objectives of our collaborative work are to:

This approach continues to produce a new set of acoustic tools designed to be transferable to other ecological regions.

For one project, we deployed two SoundTraps in the Sanctuary that passively record ambient sound over a complete lunar phase during each of the four seasons of the year. We use this information to classify the acoustic signatures of the sites. This includes relative contributions from human-produced noise sources as well as marine wildlife (invertebrates, fish, mammals) and geophysical sources (wind, waves). These recordings will help us better understand what types of sound are present and how they vary in space and time.

The two SoundTraps deployed at Stellwagen Bank National Marine Sanctuary are part of a network of hydrophones. They were also deployed at three other national marine sanctuaries: Gray's Reef, Florida Keys, and Flower Garden Banks National Marine Sanctuaries. The data gathered will allow us to monitor and compare acoustic profiles in the relatively shallow waters of these four sanctuaries.