Information on when and how barndoor skates may be kept in the skate fishery. 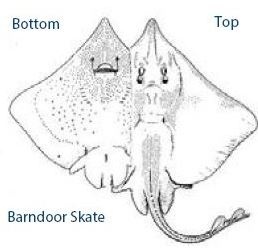 Possession and landing of barndoor skate has been prohibited since 2003, when the Northeast Skate Complex Fishery Management Plan (FMP) was first implemented. However, barndoor skate stock was declared rebuilt in 2016, and under Framework Adjustment 5 to the FMP, limited retention of barndoor skate is now allowed in the directed wing fishery.

**When targeting skates on this type of trip, a vessel is understood to be participating in the "directed skate wing fishery."

*This does not include vessels in the directed skate wing fishery following an inseason adjustment reducing the possession limit to an incidental limit. This only applies to vessels not on a DAS.

Vessels planning on possessing and landing barndoor skate under the provisional measures described in Framework 5 should be aware of the following additional requirements and regulations regarding retention of barndoor skates: