A new model based on daily oceanographic data and the movements of tagged whales has opened the potential for stakeholders to see where in the ocean endangered blue whales are most likely to be so that ships can avoid hitting them.

Habitat suitability predictions for blue whales. New research tool (an RShiny application) where users can explore and download hindcast predictions of blue whale distributions along the U.S. West Coast in 2009, 2015, and 2016. The tool displays predicted

A new model based on daily oceanographic data and the movements of tagged whales has opened the potential for stakeholders to see where in the ocean endangered blue whales are most likely to be so that ships can avoid hitting them.

Abrahms and her colleagues are now developing an app that will allow managers and ship crews to predict the location of blue whales as they transit along the West Coast. The app will also be accessible to the public and to managers making recommendation on vessel slow-downs or the use of alternative shipping lanes.

“The more we learn about how the physical ocean affects whales and other marine life, the better we are able to predict where those species will be,” Abrahms said. “The goal is to put this technology into the hands of managers, the shipping industry and other users who can most use it to help protect these animals from ship strikes and other human threats.” 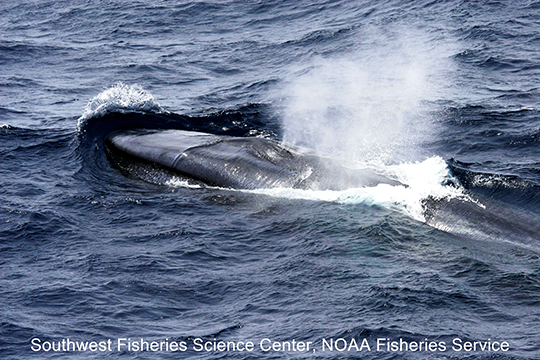 Blue whales are the largest animal to have ever existed. They can grow to the length of a basketball court, though their diet is primarily krill - tiny shrimp-like creatures less than two inches long. An endangered species, roughly 1500 blue whales are estimated to spend time in the waters off the U.S. West Coast. Movement data on the whales shows that they frequent areas off Santa Barbara and San Francisco, California, putting them at increased risk of ship strike near some of the West Coast’s busiest ports.

Satellite tags temporarily attached to more than 100 blue whales from 1994 to 2008 helped show that the whales respond to specific ocean conditions that create good habitat for the whales and their prey. These environmental factors include sea surface temperature, ocean productivity, and seafloor topography. New 3-D oceanographic modeling has also allowed scientists to begin estimating water properties at various depths, which Abrahms and her colleagues found are also good predictors of whale presence. 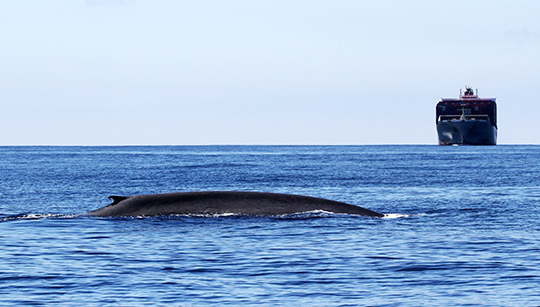 Such ocean monitoring data are available from an ocean model that integrates data from ocean buoys, satellites, and shipboard surveys, and feeds into ecological models that can be used to estimate the location of whales.

The research supports increasing use of dynamic ocean information to inform decisions about human activities, from ship traffic to fishing. These activities can be adjusted in concert with near-real-time ocean conditions that affect the distribution of marine life, such as fish and marine mammals. Dynamic ocean management can help fisheries better avoid entanglement of whales or the incidental bycatch of other protected species. It can also help ships avoid striking whales, which remains a serious mortality risk for blue whales off the West Coast.

“We’re harnessing the best and most current environmental data based on what the whales have indicated they pay most attention to,” Abrahms said. “That tells us where they will most likely be, which puts us one step closer to finding a solution.”