The Keratin Connection: A Breakthrough in Sea Turtle Research

The Keratin Connection: A Breakthrough in Sea Turtle Research

Well, Dr. Mansfield didn’t do this alone, of course. She had two important collaborators in this research. One was a biologist at Florida Atlantic University, and the other was not a scientist at all, in fact, but a nail salon technician at "Not Just Nails" in Boynton Beach, Florida. You see, sea turtle shells are made out of keratin. That’s the same stuff that our fingernails are made of. And so Dr. Mansfield and her collaborators, each an expert in their respective fields, they put their heads together and made the keratin connection. We’ll hear a bit from all three of them today. Let’s start with Dr. Mansfield.

Kate Mansfield: We had to develop a method of tracking these guys. Historically, it’s been really difficult to study them because they’re so fast growing, and because of that it’s really hard to glue anything to their shells. So we first tested a number of the hard marine epoxies that were traditionally used on much larger turtles. But on the little turtles, they’re growing so quickly that they start out as tiny little hatchlings, and they’re smaller than a deck of cards, but within a couple of months they’re doubling their size or tripling their size. And, we tried the traditional epoxies first and they all fell off of the turtles within one to two or three weeks.

Host: They tried all kinds of stuff. They tried different combinations of epoxies and adhesives, but those were shed by the fast-growing shells.They made mini harnesses out of neoprene to carry the tags, but the neoprene was too buoyant and it caused the turtles to float. They even had a student with fashion design experience sew Lycra into little one-piece suits kind of like a wrestler’s uniform, but those restricted the turtles’ growth. So when nothing was working, they went back to thinking about marine epoxies again and they took a closer look at why those failed.

Kate Mansfield: We noticed on the base of the tags where we had attached them to the shell that there was a real thin layer of "scutes" or shell material that came off. And the shells themselves are made of keratin just like our fingernails, and that’s how we made the keratin connection.

Host: Keratin. As Dr. Mansfield notes, that’s the same stuff our fingernails are made of. Well, one of Dr. Mansfield’s collaborators on this research project was Jeanette Wyneken, a biologist at Florida Atlantic University. And as it happens, Dr. Wyneken occasionally gets her nails done.

Jeanette Wyneken: I, being a good biologist, knew nothing about acrylics and manicures. I’m the person with the scars all over their hands. I do occasionally go get a manicure, but only when I have to get dressed up.

Kate Mansfield: We were in the lab trying to figure out our next step. Jeanette also has fabulous painted toenails with little waves on them, and so Jeanette called her manicurist and it was her manicurist that suggested that we try an acrylic fill kit, or a base coat, on the turtle shell to help seal the keratin and prevent it from peeling.

Marisol Marrero: My name is Marisol Marrero, and I do artificial acrylics extensions and I do manicures and pedicures, and I’m a nail technician for a living.

Host: So during one of her visits to the nail salon, Dr. Wyneken explained the situation.

Marisol Marrero: And I said, “Jeanette, have you ever thought of using acrylics?” And she says, “Oh, well, tell me more about it.” So I explained it to her, and I explained to her what to do. We have an acrylic brush and you dip it into the acrylic liquid, or we’ll call it acrylic monomer, and then it’s dipped in...

Host: Miss Marrero explained the process to Dr. Wyneken. It involved, you know, mixing up some chemicals, roughing up the shell, applying with a special brush. You get the picture.

Marisol Marrero: ...and put them together. And before it hardens—it hardens very quickly—she puts the transmitter in.

Host: At that point there’s an acrylic base coat sealing the shell and preventing it from peeling too quickly. Mansfield and Wyneken then used a combination of hair extension glue and aquarium silicone to attach the satellite tag to the base coat. Now, how they came up with the idea of using hair extension glue of all the possible adhesives out there is almost as good as the story of the acrylic base coat.

For now, though, I’ll just let you know that with their new technique, Mansfield and Wyneken got the tags to stay on the sea turtles for about four times as long as was possible before, long enough that, for the first time, biologists have good satellite tracking data on the migration routes of baby sea turtles. I asked Dr. Mansfield why this is an important step in protecting these endangered species.

Kate Mansfield: There’s a very large unknown associated with the early life history of sea turtles. We have a lot of theories about what the animals are doing from the time that the turtles leave the nesting beaches as hatchlings until they are observed later as larger juveniles, But we still are lacking a lot of really critical in-water behavioral information on what the animals are doing, how they’re interacting with their environment, how they may or may not be interacting with oceanographic features such as the gulf stream or other ocean currents, eddies, frontal areas, all sorts of things that make up the landscape of their oceanic habitat.

Host: I asked Dr. Wyneken the same question, and she gave me a slightly more concise answer.

Jeanette Wyneken: If you’re dealing with managing a species and you do it at sea, you kind of need to know where it is.

Host: And not just any species. The three species that Mansfield and Wyneken work with are loggerhead sea turtles—loggerheads are listed as threatened under the Endangered Species Act—and Kemp’s ridley sea turtles and green sea turtles, both of which are listed as endangered. You know, the story of this breakthrough is typical of many scientific breakthroughs. Very often, progress happens when people from disciplines that are traditionally considered separate combine their ideas to form a new synthesis. Usually that would be like, say a biologist and a physicist, or an economist and an anthropologist. In this case, the fresh idea came from even farther afield. 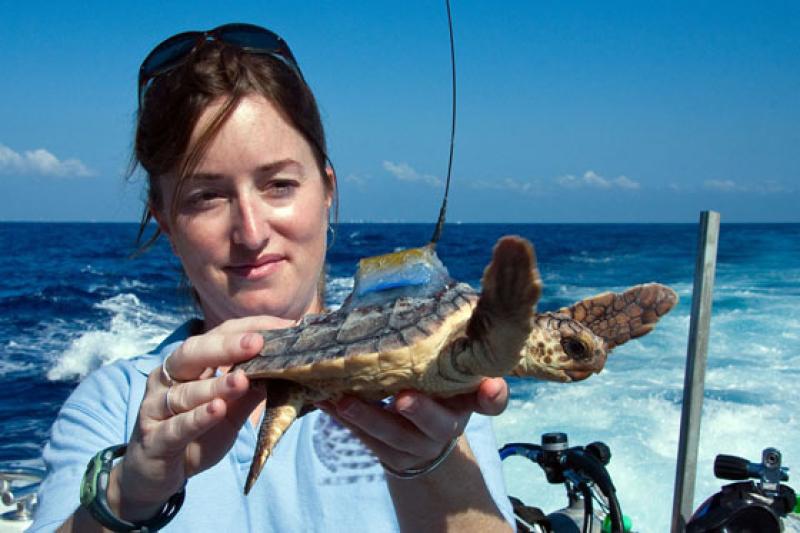 Kate Mansfield is a marine biologist with NOAA Fisheries, and she studies endangered sea turtles. Exactly where baby sea turtles go after hatching is a mystery, and Dr. Mansfield has been trying to solve it. Scientists use satellite tags to track adult sea turtles as they migrate across the ocean, but try as they might scientists have been unable to attach satellite tags to very young sea turtles. They start off so small, and grow so quickly, that anything scientists attached to their shells would fall off as the shell expanded.

That is, until Dr. Mansfield came up with a solution. She didn’t do this alone, of course. She had two important collaborators in this project. One, Dr. Jeanette Wyneken, is a research biologist at Florida Atlantic University. And the other, Marisol Marrero, is a nail salon technician at Not Just Nails in Boynton Beach, Florida.

Sea turtle shells are made out of keratin. That's the same stuff that our fingernails are made of. And so, Dr. Mansfield and her collaborators—each an expert in their respective fields—put their heads together and made the Keratin Connection.