The 2017 Summer West Coast Pelagic Fish Survey is scheduled for June 19 through August 11, 2017, aboard the NOAA Ship Reuben Lasker.

The NOAA Ship Reuben Lasker will attempt to occupy scheduled station locations between San Diego, California, and the northern extent of Vancouver Island, Canada, to survey the distributions and abundances of coastal pelagic fish species, their prey, and their biotic and abiotic environments in the California Current.

August 9, 2017, marked the final operations of the Summer 2017 West Coast Pelagic Fish Survey. During that day, staff completed transects 24 and 26, ending offshore of Morro Bay. Toward the end of the day and into the night, winds and waves became too rough and staff were only able to trawl once near the middle of transect 24. This trawl caught sardine, anchovy, Pacific and jack mackerels, and market squid. FSV Reuben Lasker then returned to San Diego and arrived Friday morning, August 11. 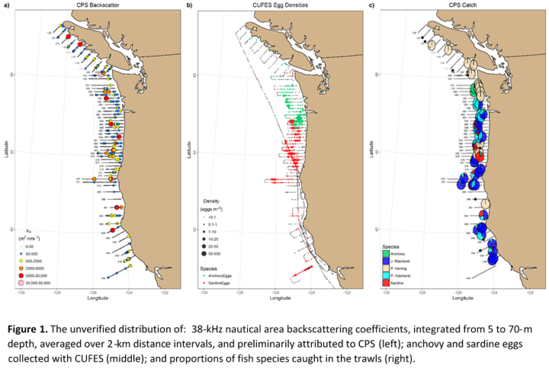 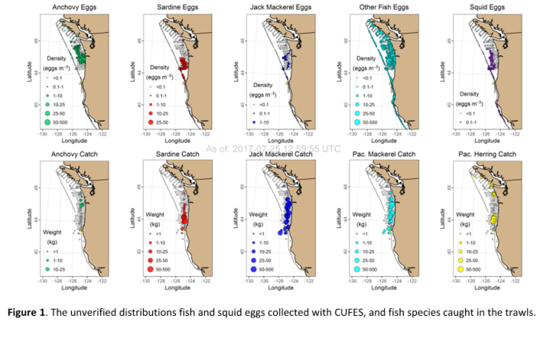 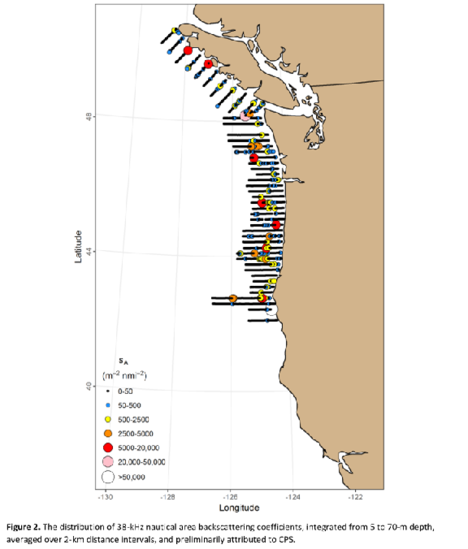 On Tuesday, July 18, the FSV Reuben Lasker departed the Exploratorium Pier at San Francisco to begin Leg II of FRD’s Summer Coastal Pelagic Species Survey. The ship first transited north to resume surveying near Waldport, OR. A trawl was attempted early in the morning on July 20, but the winches malfunctioned and were not repaired before sunrise, when acoustic sampling resumed along transect 82. While sampling off Oregon, FRD staff are coordinating with an industry pilot, Frank Foode, who is photographing any near-surface coastal pelagic species schools present along the ship’s transects. From Lasker, coastal pelagic species, eggs, and echoes were sampled along transect 82 (Figs. 1 and 2). Along transect 81, coastal pelagic species schools were observed visually from both the aircraft and Lasker, and sampled with the echosounders, continuous underway fish egg sampler, and the trawl. Three catches in this area included sardine, mackerels, and herring, totaling 298.8 kg. Sardine catches are mixed with other coastal pelagic species, mostly mackerels. The weather has been cooperative and, on July 21, sampling continued along transect 80. 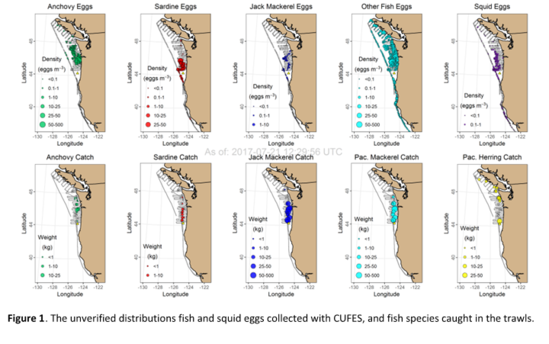 The first leg of the summer survey of coastal pelagic fishes successfully concluded in San Francisco on July 13. To date, the echosounder, trawl, and continuous underway fish egg sampling from FSV Reuben Lasker extended from the northern end of Vancouver Island to southern Oregon (Fig. 1). The coastal pelagic species backscatter mapped off Vancouver Island was attributed to herring. Herring were also found nearshore off Washington; and anchovy and mackerels were found farther offshore. Some 190-260 mm sardine was caught off Oregon amidst more abundant jack and Pacific mackerels. Leg two will begin on July 17 and transects will continue to south of Monterrey Bay before the cruise ends in San Diego on August 11, 2017. 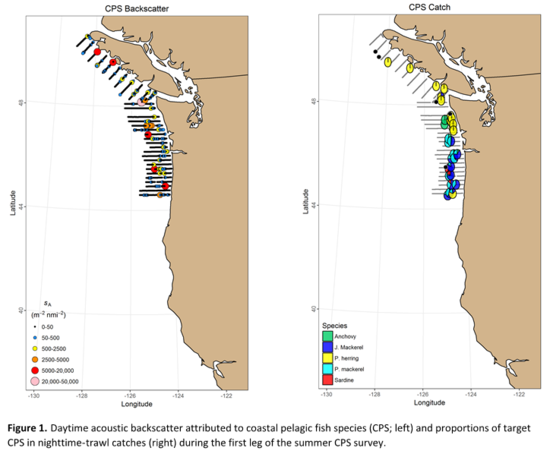 After a quick crew change on July 1, the Summer Coastal Pelagic Species Survey resumed on Transect 101 and continued offshore. FSV Reuben Lasker is completing, on average, 2 transect lines per day and 2-3 trawls per night.

On 1 July, Lisa Marie began a complementary survey of coastal pelagic species nearshore of Washington and Oregon. An EK60 echosounder and the vessel’s sonar are also collecting acoustic data. Each day, the ship rendezvous with FSV Reuben Lasker and samples a portion of the same transect. Then, as FSV Reuben Lasker transits to and surveys the next two transects to the south, Lisa Marie surveys shorter transects as close to shore as navigable. The nearshore sampling off Washington is complete, and Lisa Marie is now sampling off Oregon.

Concurrently, a spotter pilot is flying over and photographing the survey area. A near-surface coastal pelagic species school was observed from the plane, and then by the 38-kHz echosounder on Lisa Marie (Fig. 1). The echosounder also detected many deeper schools that were likely not observable from the aircraft. A near-surface school was sampled by jigging and determined to be anchovy. The specimens were frozen and will be processed by the WA-DFW upon returning to Westport. No sardine have been found nearshore. 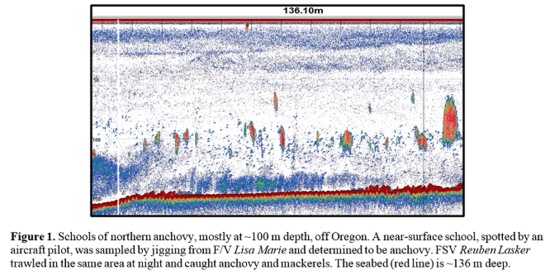 This 50-day acoustic-trawl survey is sampling coastal pelagic species off the west coasts of the US and Vancouver Island, Canada. Samples of acoustic backscatter, fish and krill specimens, fish eggs, and temperature and salinity versus depth will be analyzed to estimate the distributions and abundances of the northern sub-population of northern anchovy, the northern sub-population of Pacific sardine, and jack mackerel, Pacific mackerel, herring, and krill in the survey area. 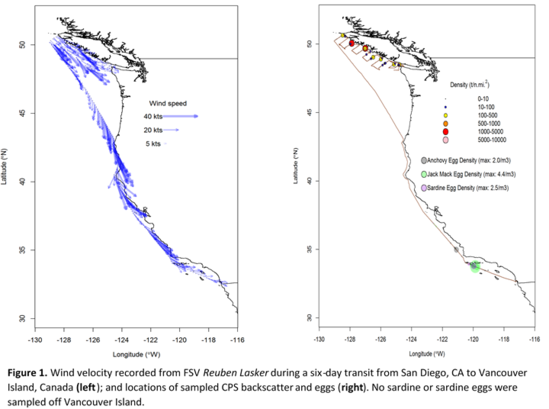 When surveying off Washington and Oregon, Lasker will be coordinating with FV Lisa Marie, which will be sampling the area closer to shore than Lasker can safely navigate during the planned 10-day survey (nominally 1-10 July). An EK60 scientific echosounder was installed aboard Lisa Marie, which will be used in conjunction with the vessel’s 38-kHz split-beam transducer to sample calibrated acoustic backscatter. A video recording device was also installed to store the vessel’s sonar display. Species proportions and their lengths will be sampled using a purse-seine net. During the first five days of the collaborative nearshore survey, two commercial fishers will sail aboard Lasker to observe FRD’s acoustic-trawl sampling.

The California Current Ecosystem Survey (CCES) is the product of two previous surveys, SaKe (Sardine and Hake Survey) and the Coastwide Sardine Survey, which now encompasses all CPS in the Pacific Ocean from Canada to Mexico.