Observations of Fish, Birds, and Life at Sea in the Pacific Islands

Have you ever wondered what it would be like to work as a fisheries observer? Spending weeks at sea, long hours identifying and measuring fish, and all the while braving the harsh and vast environment that is the open ocean? Holly Ann Naholowaa, a veteran observer for the Hawaiʻi longline fishery, shares her experiences during a fishing trip and provides a glimpse into her life at sea. 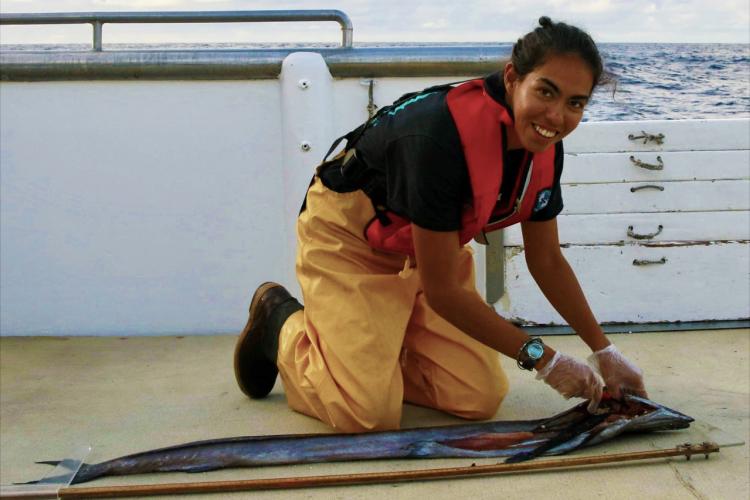 On our way! Leaving Oahu to go fish. We are headed past the westernmost tip of Oahu called Kaena Point. There were fairy terns (manu-o-Ku) in the distance, snapping up small baitfish from the water's surface. Kaena Point is a fenced conservation area for the nesting Laysan albatross and wedge-tail shearwater. Hawaiian monk seals also visit Kaena regularly. I just observed a cruising humpback whale right outside Ewa Beach! I took the time and coordinates on my phone to log into my data later. They are back here in the islands to breed and calve. If you look hard enough, you can see the white marking on the underside of this humpback's tail (a.k.a. fluke). Those markings under its fluke are like a human thumbprint—they are never the same as other whales. Hence, you can identify individual humpbacks through their ‘fluke prints.’ This one looks like he’s swimming towards Honolulu. I was a little sad leaving home, but am feeling good now. It’s a beautiful day out, and my boat is like a cruise ship! Bye, Waikiki and Honolulu!

Hello! Yesterday, I woke up feeling great! Then the "weather," if you can call it that, came. It came in the form of 15-20-mph winds, Beaufort 4 conditions, and boy did it do me in! I lumbered to the back of the boat with a pronounced headache, feeling too sick to walk in and grab some much-needed Dramamine. I kept sitting there and groaning, while two black-footed albatross easily sailed by. I watched them with disdain—they were built for a life at sea, and I was a sickly intruder. It was around that moment when I realized I was an intruder that I ran for the stern and threw out all my cookies. It’s interesting, though: seasickness goes away entirely after you "throw cookies." After throwing mine, I was able to socialize, walk back inside, rip open a packet of Dramamine for Kids, and hop in the hot shower to rid myself of all remnants of that experience. Afterwards, I crawled into my bunk, threw the comforter over my head, and fell asleep. That’s what these pills do: they put you to sleep.

Set one, we’re working now! Our first haul was about 13 hours of mostly lancetfish. To be exact, we caught 60 lancetfish, trumping our total catches that night for all tuna, billfish, mahi, and wahoo combined. In fact, lancets, as they are unlovingly called, are the most common bycatch species in our fisheries, besides blue sharks. In the past, we collected whole frozen lancetfish for scientific research, and I am currently collecting two lancet stomachs per haul for an ongoing dietary study. According to Jantz et al. (2013), lancets eat jellyfish, micro plastic, smaller lancets, and other tiny deepwater organisms. I once found a tako (octopus) in a large lancet's stomach, and a small glow stick in another’s. Here is a picture of a lancet, the most commonly caught fish in the Hawaiʻi longline fishery.

Set number two and boy is it cold out! We are North at 30 degrees latitude, just under the 32 degrees latitude line where we would need to have seven documented survival suits onboard in case an unfortunate event causes us to abandoning ship. I’ve got my government-issued Canon EOS 70D camera out and am hunting for rare birds and albatross with tags. When I get back to land, I’ll enter tag information in the Patuxent Bird Database, and see how old each particular bird is and where they are from. It’s been a while since I’ve seen an albatross (my last two trips yielded zero sightings), so it was really refreshing to see a total of four black-footed albatross and one Laysan albatross on this bitingly cold morning! I am constantly awed by the resilience to cold weather that seabirds—really, all birds—have. Birds, in general, have the best down coat ever made. Although we now have synthetic fabric that can be used in place of down, it doesn’t come near the insulating power of down. Down feathers have one drawback: they can’t get wet.

That doesn’t stop albatross from flying around in all types of weather, though. The downy plumes are accompanied by semi-plumes that help give birds their aerodynamic shape and a little more insulation. All this insulation is encased in an impenetrable coat of contour feathers that are water-proofed, wind-proofed, and give the bird its overall aerodynamic shape. The contours—the outer shell of their impeccably perfect coat—are the feathers that you are looking at when you look at the body and head of these albatross. 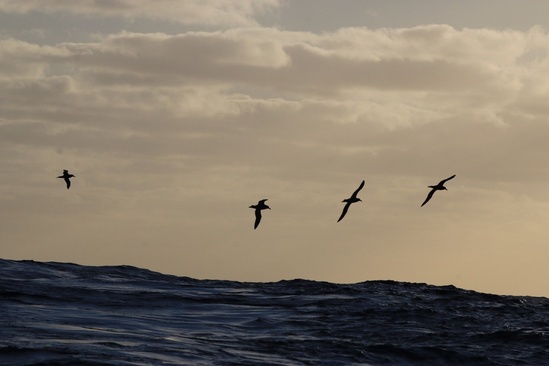 We’re deploying the whale sound recording device today, which looks like a torpedo. It is part of an ongoing project to better understand how false killer whales are interacting with fishing gear. The captain came down and talked to his crew, explaining to them what we will be doing. I would stand on one side of the hook box with the marine mammal recording device in hand, and drop it over while the deck boss snapped it onto the mainline. The captain even suggested that he photograph me deploying it! Once everyone was in place, I went over by the hook box, grabbed the marine mammal recorder, and threw the device overboard. After we put the gear in the water, I recorded the time and location that we put the recorder in. You can see two black-footed albatross flying behind me while I fill out the paperwork. 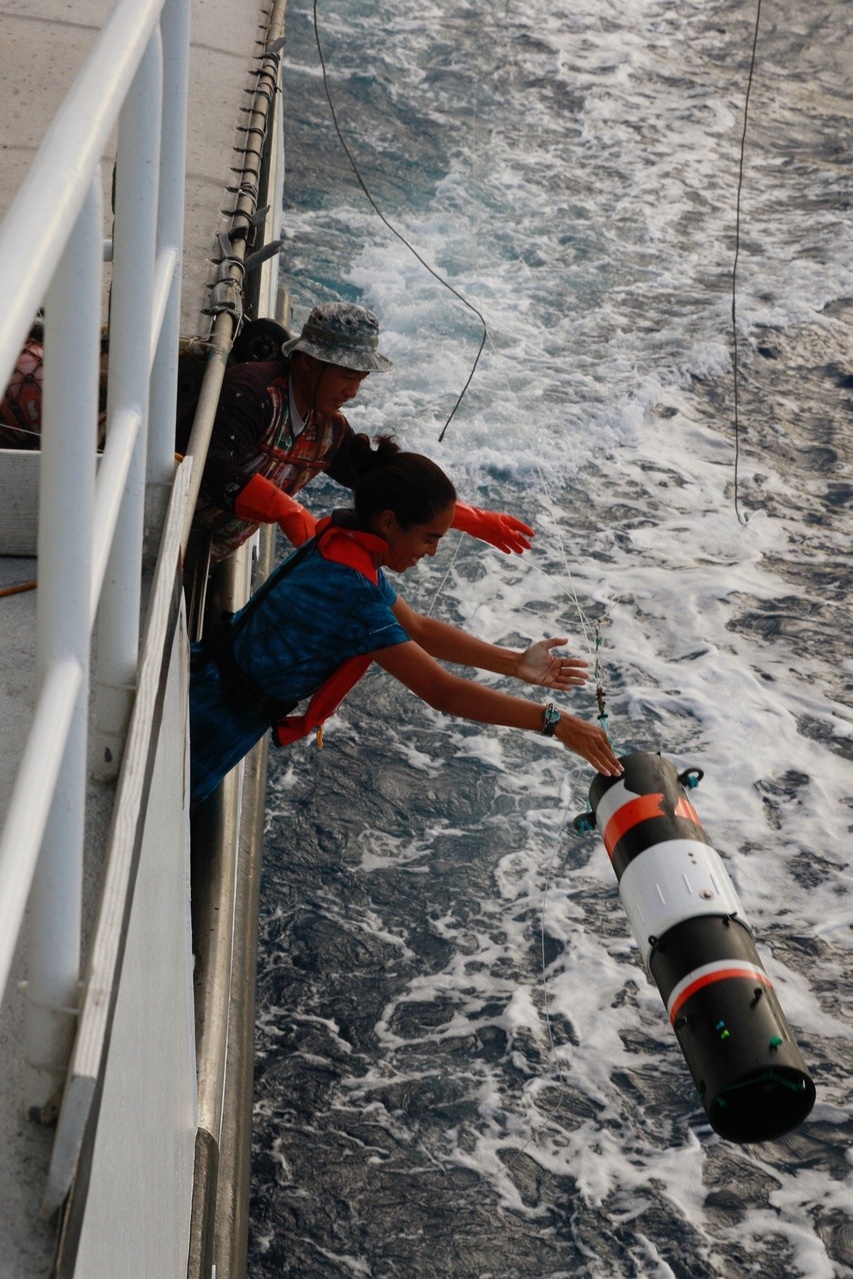 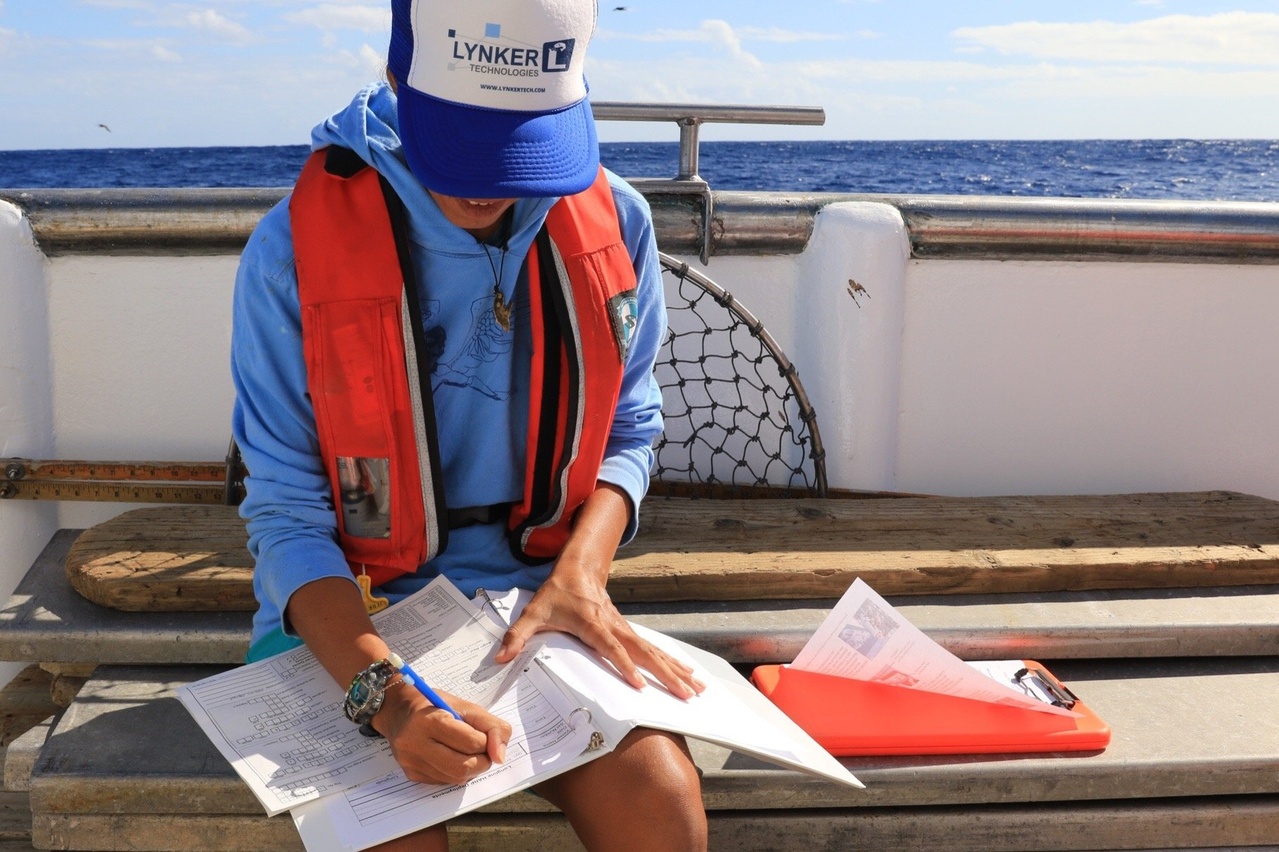 December 14: Observer to the Rescue

Set eight, and boy is it a nice morning! The water is glassy, and the black-footed albatross are cruising right outside the bird curtain. We caught so many large tuna last night, and everyone was happy and pumped through the whole haul. It was all smiles, hooting, and hollering when the mainline would come up with taut branch-lines. I got my two lancetfish stomachs for the ongoing study, and got to de-hook some pelagic stingrays. To avoid injury, a person usually shakes stingrays off hooks because they have spiny barbed tails that can cause serious damage if mishandled; however, shaking them off the hook tears out their jaws. If handled properly, the threat of being injured by a stingray is greatly lowered for the handler, and the stingray gets a new lease on life.

After de-hooking some stingrays, the moment I had been waiting for finally arrived. I had been watching, and almost every day there are 2–3 or more unspecified storm petrels flying around the boat. When we haul up gear at night, the lights of the vessel blind the storm petrels if they fly in too close. Some of the small birds get so disoriented that they end up on deck, in need of assistance. It was on this particularly calm night that an unfamiliar-looking storm petrel got blinded by the light and collided with my gear bucket, landing on the wet deck.

When I got to the downed bird, it was nestled by my bucket, its rump lying flat against the wet ground as it looked around, bewildered. I watched it just resting there, oblivious to the obvious threat (me). That’s seabirds. They have no natural predators, so they don’t run away when faced with the threat of abduction by an overly excited human. I hastily snatched the little bird off the wet floor and curled my pointer and middle finger over its shoulders like a seatbelt, while its body lay firmly cradled in my hand. It turned its fluffy little brown head, studying me. I glanced at it, and quickly went for the nearest dry cardboard box I could find, which happened to be a small, shallow box—it would have to do. I dried his wet under-tail coverts (butt) a little and stuck him inside the box. One of the crew eagerly walked up, and asked me what kind of bird it was, and if he could hold it. I told him a rare one (at this point I erroneously thought it was a Hawaiian band-rumped storm-petrel) and yes, you can hold it, but take off your gloves. He eagerly took his gloves off to hold the bird, and had me take a few shots. After the bird calmed and dried off, I cupped it in my hands, and held it out over the vessels stern. I could feel its little body shuffling around excitedly. I opened my cupped hands a little to give the cardinal-sized bird room to extend its wings. I watched as it sat there for about 5 minutes, looking out into the vast darkness, until it opened its wings and let the wind carry it off over the vast ocean. 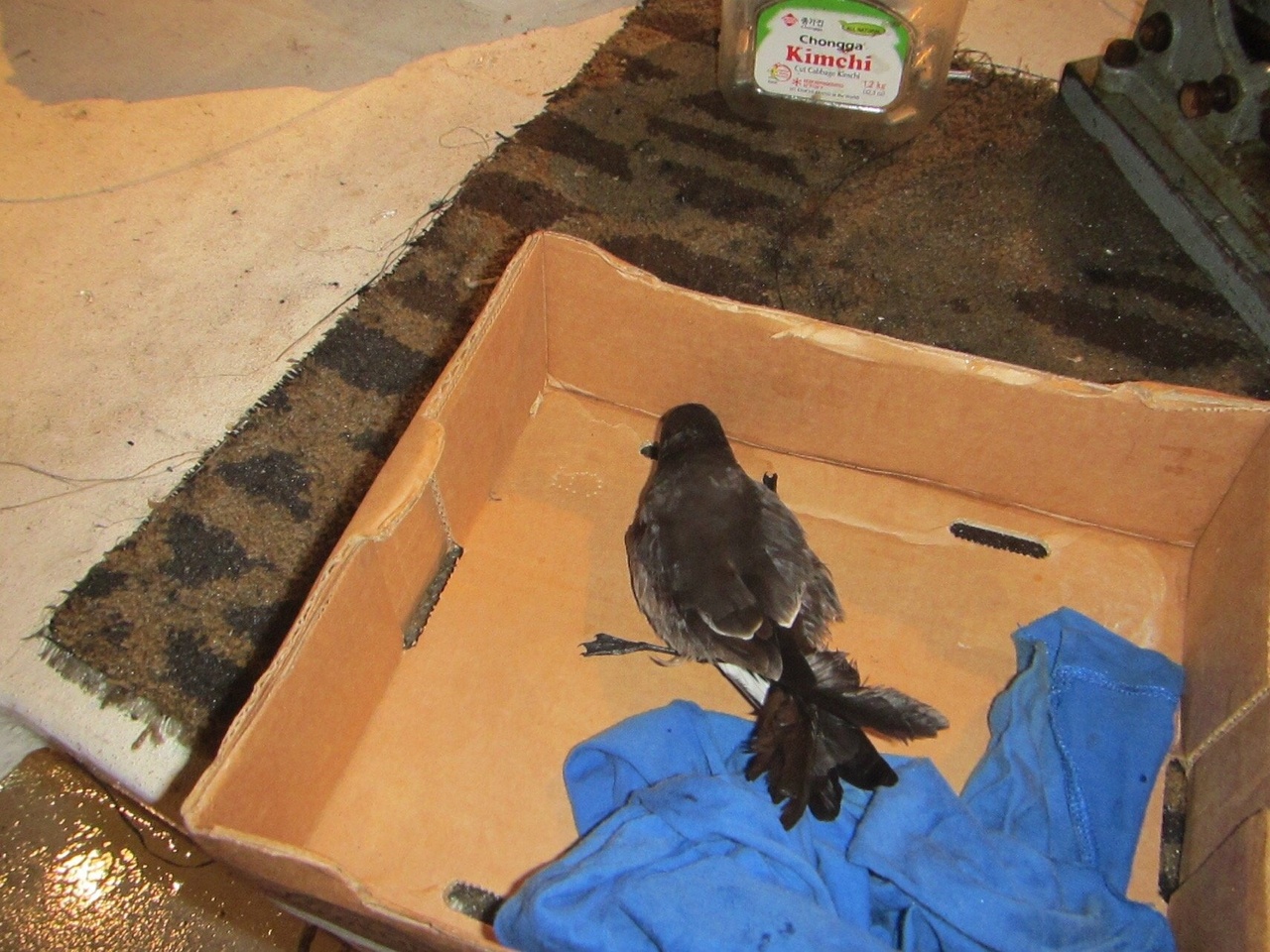 Storm petrel recovering in a shallow box on the deck of the fishing vessel (Photo: NOAA Fisheries).

The weather was nice, and we were all looking forward to catching fish on set 10. What we got was a whole lot of nothing for the majority of the set. Mid-haul we caught the lower jaw of a marlin that was entangled in three branch-lines. One of the crew held the jaw piece up for me to inspect, and said in a very concerned and hushed voice, “something is wrong here.” I took a photo of the carnage, nodded, and quietly walked back to where I was sitting. The crew didn’t know what was going on. Who was this mythical creature that had chased away all the fish, leaving one telltale clue to its identity? I was getting a kick out of this. I knew it was toothed whales who had found our gear, and went about munching on every hooked piece of bait, feasting on bigger catch like this marlin. I didn’t tell the crew though, I liked watching them ponder over who the culprit of this heinous act could be. About midway through the second half of the set, we caught the head of a tuna—expertly cleaned out. Fish heads on hooks are the hallmark sign of whale predation, and the crew knows this. The mythical creature had been revealed as a very hungry whale (or pod of whales) that had raided our gear. Whales are very smart, and rarely get hooked when feasting. In the event that they do bite a hook, the hooks are made to bend open (straighten out) with enough force. 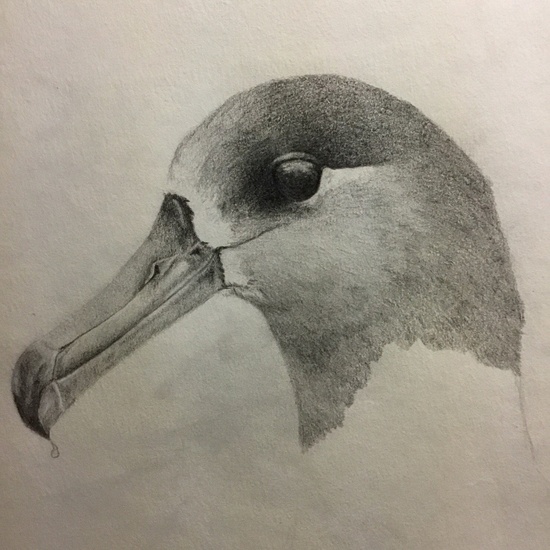 Running back home! Today, I started the morning with a sketch of a black-footed albatross, the species of albatross that had been following our vessel the whole time we were out fishing. After that, I went out back to measure gear and finish up my paperwork for the trip. The rest of the time I spent chatting with the captain, catching up on boat gossip. It was great sharing funny boating stories and catching up on the social scene at the docks. Tomorrow we arrive home at around 3 pm.  I can’t wait to see my fiancée and family.

Holly Naholowaa grew up in Oahu and became an observer through the Alu Like Observer Training Program. She absolutely loves her job at sea, and wouldn’t trade it for the world! She currently resides in Oahu, where she lives with her fiancée, and quasi pet cat. In her time she enjoys surfing, drawing, and traveling to new places.