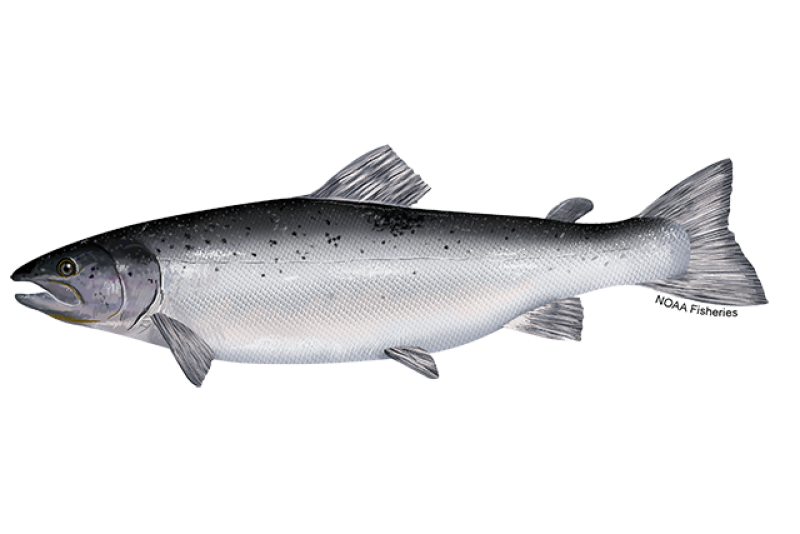 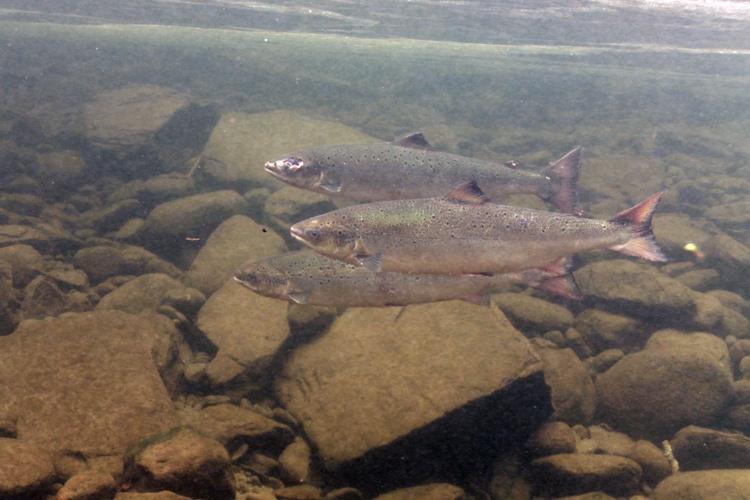 Atlantic salmon, also known as the “King of Fish,” are anadromous, which means they live in both fresh and saltwater. Atlantic salmon have a complex life history that begins with spawning and juvenile rearing in rivers. They then migrate to saltwater to feed, grow, and mature before returning to freshwater to spawn.

Atlantic salmon are vulnerable to many stressors and threats, dams and culverts that block or impede the migratory movements between freshwater spawning and rearing habitats and the marine environment, habitat degradation, foreign fisheries, and poor marine survival. They are considered an indicator species or a “canary in the coal mine.” This means that the health of the species is directly affected by its ecosystem health. When a river ecosystem is clean and well-connected, its salmon population is typically healthy and robust. When a river ecosystem is not clean or well-connected, its salmon population will usually decline.

Atlantic salmon in the United States were once native to almost every coastal river northeast of the Hudson River in New York. But dams, pollution, and overfishing reduced their population size until the fisheries closed in 1948. Commercial and recreational fishing for wild sea-run Atlantic salmon is still prohibited in the United States. All Atlantic salmon in the public market is cultured and commercially grown. Currently, the only remaining wild populations of U.S. Atlantic salmon are found in a few rivers in Maine. These remaining populations comprise the Gulf of Maine distinct population segment, which is listed as endangered under the Endangered Species Act. Some populations in southern Canada and Europe are also declining significantly, creating concern about the status of this species globally. In addition, the Gulf of Maine DPS is one of eight Species in the Spotlight. This means that NOAA Fisheries has made it a priority to focus recovery efforts on research to better understand the major threats and stabilize the Gulf of Maine DPS by improving access to quality habitat and thus, preventing its extinction.

Our dedicated scientists and partners use a variety of innovative techniques to conserve Atlantic salmon and to protect and rebuild depleted endangered populations. NOAA Fisheries also works with partners to protect federally designated critical habitat for Atlantic salmon and makes every effort to engage the public in conservation efforts.

The endangered Gulf of Maine DPS of Atlantic salmon has declined significantly since the late 19th century. Historically, dams, overfishing, and pollution led to large declines in salmon abundance. Because of this, the commercial Atlantic salmon fishery closed in 1948. Improvements in water quality and stocking from hatcheries helped rebuild populations to nearly 5,000 adults by 1985. But dams continued to block access to habitats and marine survival has decreased significantly since the late 1980s, resulting in annual returns to the United States of generally less than 1,000 adults. The rapid decline and dire status of the ESA-listed Gulf of Maine DPS makes it a priority for NOAA Fisheries and partners to prevent its extinction and promote its recovery.

While in freshwater, young Atlantic salmon—known as parr—have brown to bronze-colored bodies with dark vertical bars and red and black spots. These markings camouflage and protect them from predators. Once young salmon are ready to migrate to the ocean, their appearance changes; their vertical barring disappears and they become silvery with nearly black backs and white bellies. When adults return to freshwater to spawn, they are very bright silver. After entering the river, they will again darken to a bronze color before spawning in the fall. After spawning, adults—now called kelts—can darken further and are often referred to as black salmon. Once adults return to the ocean, they revert to their counter-shaded coloration dominated by silver.

Typically, an Atlantic salmon returning to U.S. waters will be 4 years old, having spent 2 years in freshwater and 2 years at sea. These fish are called “two sea winter fish,” or 2SW, and are usually 28 to 30 inches long and 8 to 12 pounds. The size of adults returning to freshwater from the ocean depends on how long they lived at sea. Young salmon returning to freshwater after 1 year at sea (known as “grilse” or 1SW) are smaller than 2SW adults. Adult salmon can migrate several times to spawn—a reproductive strategy known as iteroparity—though repeat spawners are becoming increasingly rare.

Atlantic salmon are migratory. They travel long distances from the headwaters of rivers to the Atlantic Ocean before returning to their natal rivers. For example, U.S. salmon leave Maine rivers in the spring and reach the seas off Newfoundland and Labrador, Canada, by mid-summer. They spend their first winter at sea south of Greenland and their second growing season at sea off the coast of West Greenland and sometimes East Greenland. Maturing fish travel back to their native rivers in Maine to spawn after 1 to 3 years.

The diet of Atlantic salmon depends on their age. Young salmon eat insects, invertebrates, and plankton. The preferred diet of adult salmon is capelin. Capelin (similar in appearance to rainbow smelt) are elongated silvery fish that reach 8 to 10 inches in length.

The GOM DPS at listing included the nine remnant populations in central and eastern Maine. River specific populations still persist in the Sheepscot, Penobscot (including the Ducktrap), Narraguagus, Pleasant, Machias, East Machias, and Dennys rivers. GOM salmon leave Maine rivers in the spring and reach the seas off Newfoundland and Labrador, Canada, by mid-summer. They spend their first winter at sea south of Greenland and their second growing season at sea off the coast of West Greenland and sometimes East Greenland. Maturing fish travel back to their native rivers in Maine to spawn after 1 to 3 years. 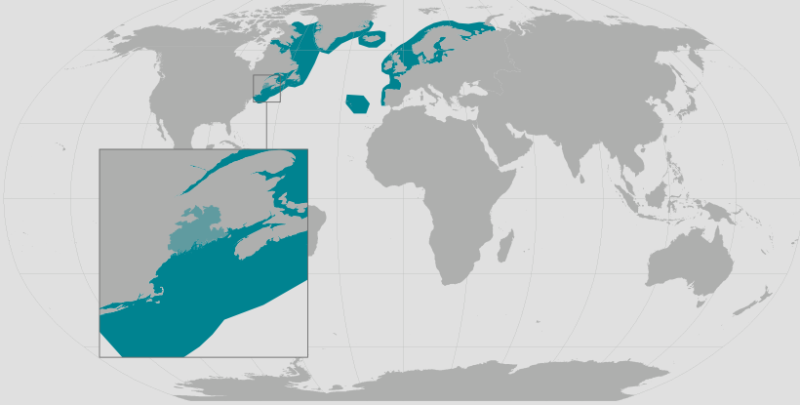 Atlantic salmon have a complex life history and go through several stages that affect their behavior, appearance, and habitat needs. They are anadromous, which means that they are born in freshwater, migrate to the ocean as juveniles, and then return upriver to spawn as adults.

When spawning in the fall, the female salmon uses its tail to dig nests in the gravel where the eggs are deposited. These nests are called redds. Over winter, the eggs develop into very small salmon called alevin. In the spring, the alevin swim out of the redd and are then called fry. Fry grow into parr, which are only 2 inches long and are camouflaged to protect them from predators. For 2 to 3 years, the parr grow in freshwater before transforming into smolts in the early spring. The silvery smolts’ gills and organs change, allowing them to swim to the ocean where they spend 1 to 2 years maturing into adults.

The adult Atlantic salmon return to the river where they were born to lay eggs. After spawning in freshwater, the adults, now called kelts, swim back to the ocean to possibly return to spawn again in future years.

Females returning to spawn after two winters at sea lay an average of 7,500 eggs. Out of these eggs, only about 15 to 35 percent will survive to the fry stage.

Atlantic salmon populations are exposed to a variety of threats. The most significant threats to their survival include impediments—such as dams and culverts—that block their access to quality habitat, low freshwater productivity, ongoing fisheries off the shores of Greenland, and changing conditions at sea. Salmon also face many other threats that affect their survival, such as poor water quality, degraded freshwater habitats from land use practices, fish diseases, predation from introduced and invasive species, and interbreeding with escaped fish raised on farms for commercial aquaculture. All of these factors are compounded by climate change and Atlantic salmon are the most vulnerable finfish in this region to this overriding stressor.

NOAA Fisheries is committed to working together with our federal, state, tribal, and NGO partners in the conservation and recovery of all Atlantic salmon. We have focused our conservation efforts to help rebuild the depleted and endangered population in the Gulf of Maine. Our targeted management actions to secure protections for these fish include:

Our research projects have discovered new aspects of Atlantic salmon biology, behavior, and ecology and helped us better understand the challenges that all Atlantic salmon face. This research is especially important in rebuilding depleted and endangered populations. Our work includes: 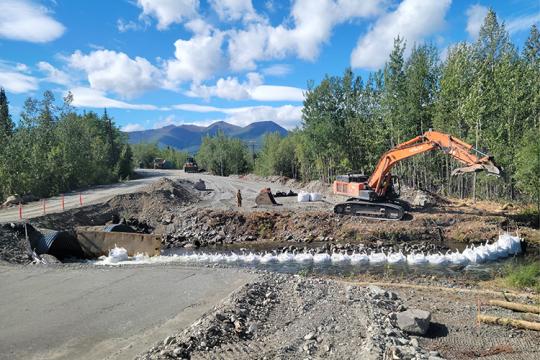 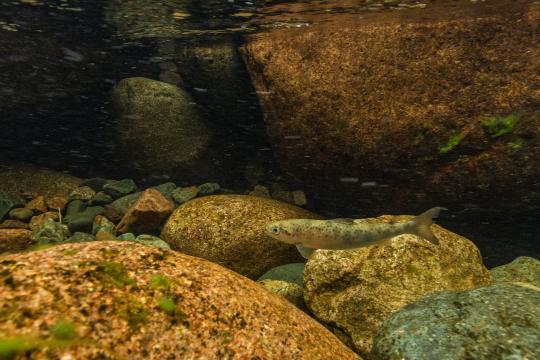 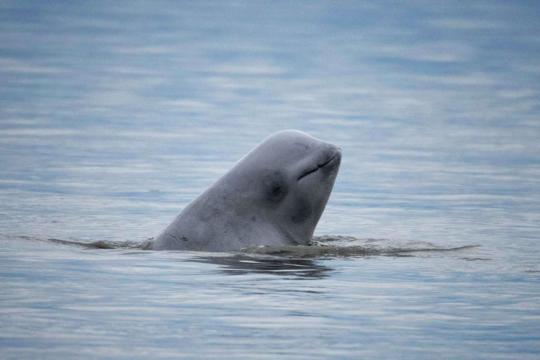 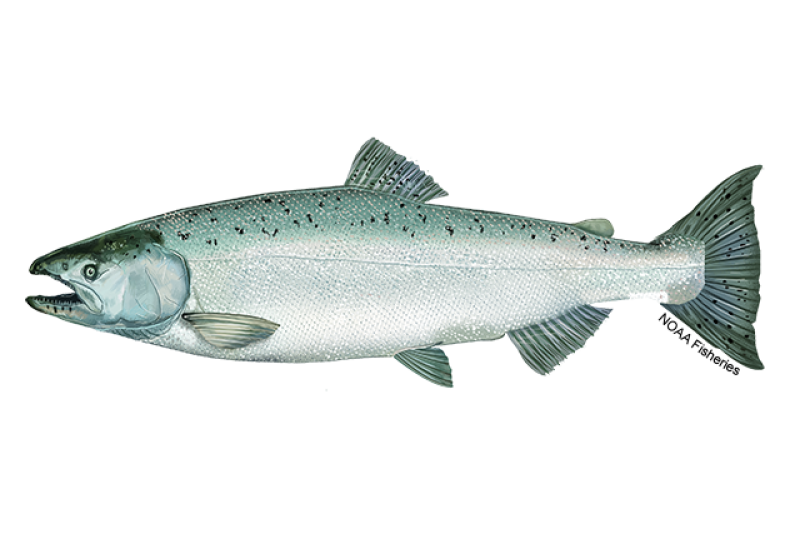 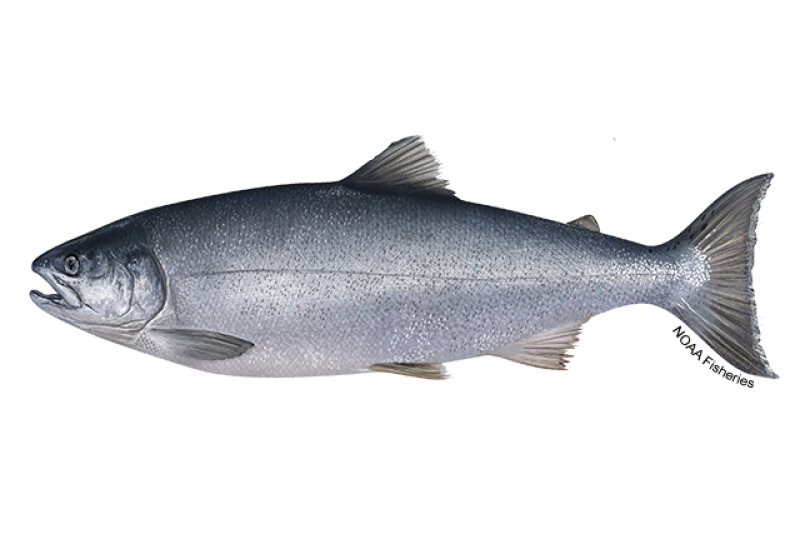 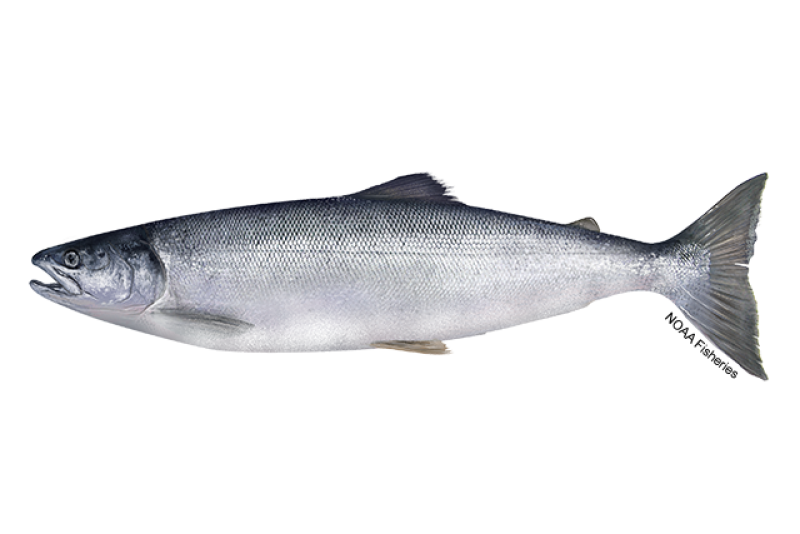 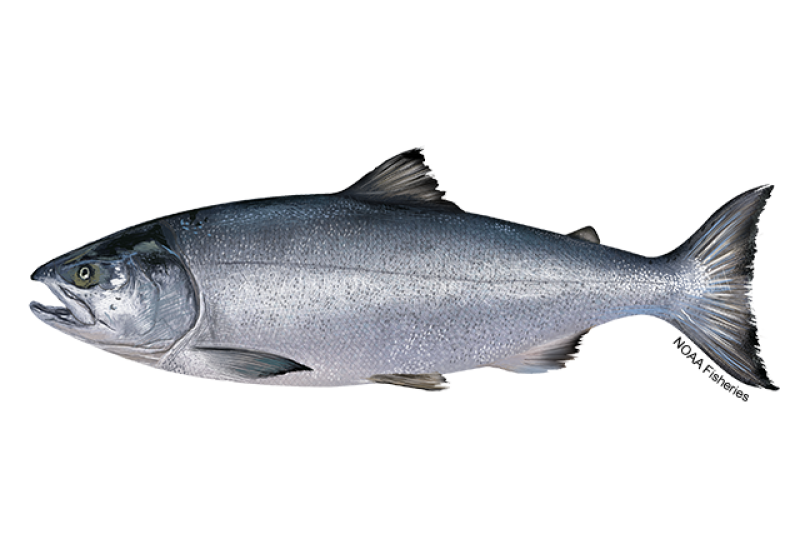 The Gulf of Maine DPS of Atlantic salmon is listed as endangered under the Endangered Species Act and is in danger of extinction.

In the United States, NOAA Fisheries works to protect all Atlantic salmon. We have specific recovery actions and management strategies for the Gulf of Maine DPS because it is endangered.

In 2017, NOAA Fisheries announced the initiation of a 5-year review for the Gulf of Maine Distinct Population Segment (DPS) of Atlantic Salmon (Salmo salar). NOAA Fisheries is required by the Endangered Species Act (ESA) to conduct 5-year…
Notice
,
New England/Mid-Atlantic

Critical Habitat for the Gulf of Maine DPS of Atlantic Salmon

Listing Gulf of Maine DPS of Atlantic Salmon Under the ESA

We (NOAA Fisheries and U.S. Fish and Wildlife Service, collectively referred to as the Services) have determined that naturally spawned and conservation hatchery populations of anadromous Atlantic salmon (Salmo salar) whose freshwater range occurs in…
Final Rule
,
New England/Mid-Atlantic

The health of Atlantic salmon is directly affected by the health of their ecosystem, which includes the other species living in that ecosystem. Atlantic salmon co-evolved and historically shared the rivers of Maine with many other fish that provide alternative food sources for salmon predators and the salmon themselves. Co-evolved fish also influenced the amount of nutrients available and the habitat quality. Our scientists study how changes in co-evolved fish populations affect the recovery of Atlantic salmon.

Salmon are famous for fighting their way upstream to spawn, but their trip downstream as young smolts is no less important. Our scientists study how passage through or around dams affects smolts. Scientists surgically implanted tags into 941 smolts in the Penobscot River between 2005 and 2013. Each tag emits a sound unique to the fish carrying it. Receivers then pick up the sound as the fish travels down the river to track its progress.

This research reveals that even if smolts make it past the dams, they might suffer injuries that make them more likely to die days or weeks later in the estuary, where the river meets the sea. And for each dam a smolt passes, researchers found that the smolt’s chance of dying in the estuary increases by 6 to 7 percent.

NOAA Fisheries is monitoring the genetic diversity of Atlantic salmon to ensure that salmon born in hatcheries can have a good chance at surviving in the wild. We also want to make sure that wild salmon are genetically diverse and this diversity is maintained in the captive broodstock lines held at the hatchery. This information will help us monitor the overall genetic diversity within the Gulf of Maine DPS population and inform best practices for hatchery management and supplementation efforts supporting recovery.

Our scientists study the parasites, bacteria, and viruses that can affect Atlantic salmon health. Populations that are already threatened are especially vulnerable to disease outbreaks, so it is important to understand how specific pathogens could affect the Gulf of Maine DPS. Scientists have sampled several fish species for pathogens, including cod, eel, halibut, mackerel, trout, smelt, and flounder. Since 2000, scientists have sampled over 5,000 fish representing 23 species. These 23 species can all interact with Atlantic salmon in shared habitats. Collaborative efforts will help improve our understanding of diseases and our ability to prevent and manage disease outbreaks (PDF, 5 pages).

Determining the number of salmon in the Gulf of Maine DPS—and whether the population is increasing or decreasing over time—helps resource managers assess the successes and failures of enacted conservation measures and helps to guide future recovery actions. Our scientists collect information and present these data in annual stock assessment reports. 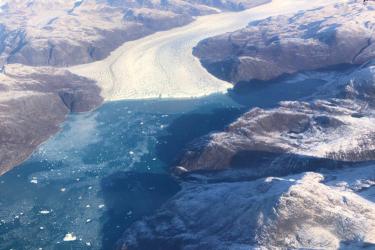 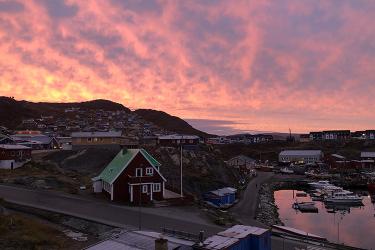 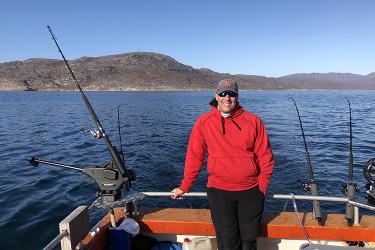