Commission for the Conservation of Antarctic Marine Living Resources

The Commission for the Conservation of Antarctic Marine Living Resources is an international treaty to manage Antarctic fisheries with the goal of preserving species diversity and stability of the entire Antarctic marine ecosystem.

The long history of mostly unregulated harvesting activities in Antarctic waters has already contributed to the over exploitation of Antarctic fish and marine mammal stocks. Exploitation began in the early 1800s with Antarctic fur seals and southern elephant seals. Both were driven to near extinction by the turn of the century. Between 1930 and 1980 the populations of blue, fin, sei, and humpback whales are estimated to have been reduced to 10 percent of their former abundance levels. Similarly uncontrolled fishing has reduced the stocks of marbled rockcod to less than 10 percent of their former biomass. The recovery of depleted whale and fish stocks is dependent in part on the continued availability of krill in the rich Southern Ocean feeding grounds.

Since the 1970s, several countries have commenced krill fishing. A repeat of excessive fishing effort in local areas could have an adverse impact on local populations of krill dependent predators. In recent years, the United States has also become active in fishing in the Antarctic, targeting crab, krill, and toothfish. Consequently, the United States is obliged to monitor the actions of the U.S. fisherman, including observation of the fishing operations.

Convention for the Conservation of Antarctic Marine Living Resources

The Convention for the Conservation of Antarctic Marine Living Resources was established in 1982. It was established in response to concerns that increasing krill fishing activities could have a deleterious impact on the Southern Ocean ecosystem. It is an international treaty between 25 nations that seeks to manage Antarctic fisheries with the goal of preserving species diversity and stability of the entire Antarctic marine ecosystem.

Although the aim of the Convention is to conserve marine life of the Southern Ocean, it does not prohibit reasonable harvesting. To this end, information is gathered along with extensive datasets, in addition to the development of relevant scientific and analytical techniques. Recognizing the uncertain nature of these efforts, the Convention has adopted a "precautionary" approach to minimize the potential risks of unsustainable practices. 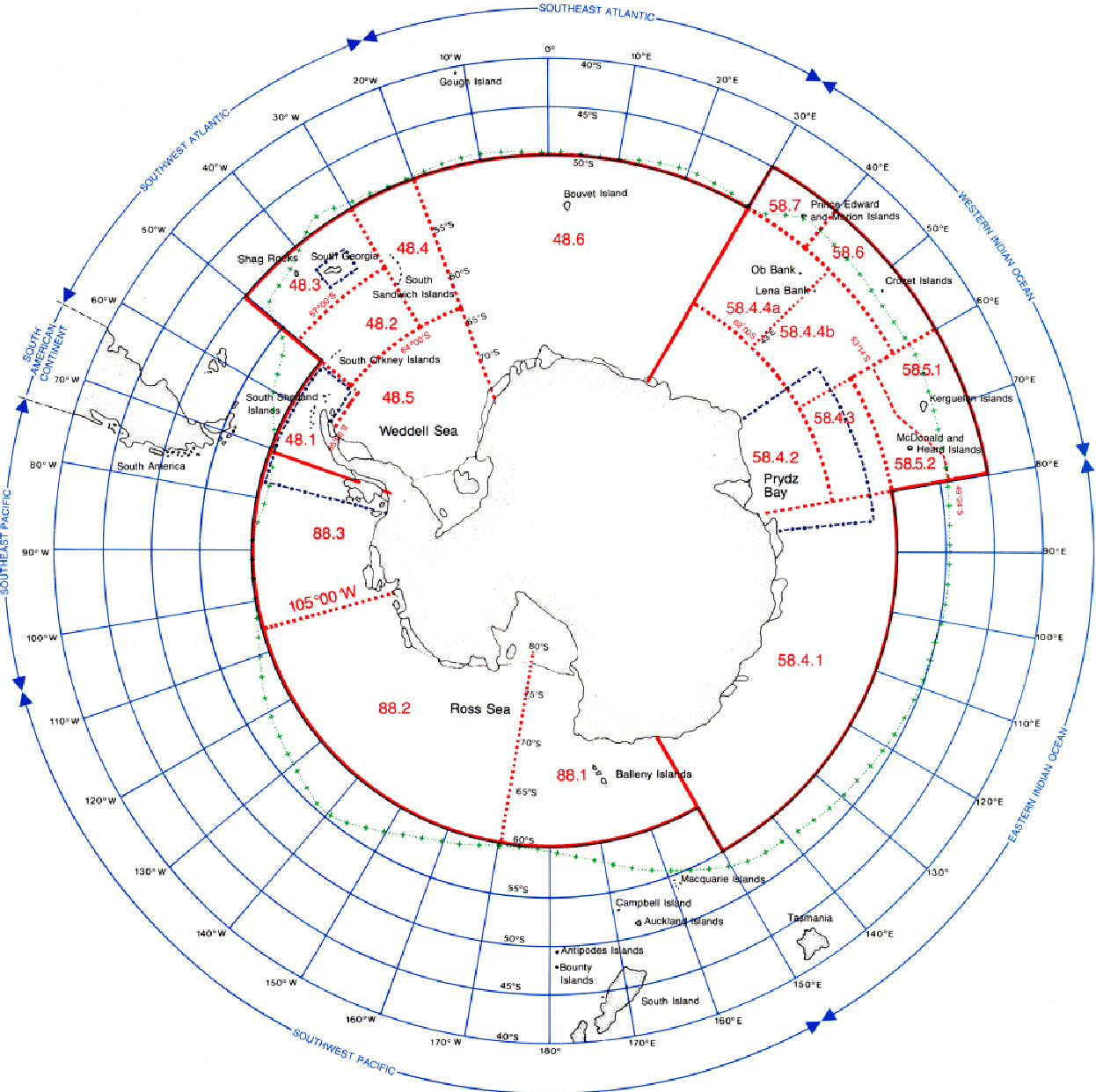 Map of the CCAMLR territory.

Over the years, Antarctic resources have continued to gain greater economic value. As such, the temptation to work outside conservation or regulatory measures increases, leading to "illegal, unregulated and unreported (IUU) fishing." The extensive harsh area of the Southern Ocean make it extremely difficult for members to police (much less enforce) Convention measures to minimize IUU fishing.

The Antarctic Marine Living Resources (AMLR) Convention Act of 1984 provided the legislative authority to establish the U.S. AMLR Program. The program implements NOAA’s strategic goal of managing the use of the Southern Ocean resources through an ecosystem approach. The program (working with the US Department of State) supports U.S. participation in both the Commission and the Scientific Committee of the Convention, and conducts directed research towards achieving the conservation objectives of the Convention.

U.S. AMLR has continued its long history of leadership in the new millennium. Since 2000, our scientists have acted as conveners or co-conveners for the:

They have acted as Chair or Vice-Chair of the CCAMLR Scientific Committee. They have also convened various subgroups and workshops, such as the Workshop on Vulnerable Marine Ecosystems and the Workshop on Small Scale Management Units. These are intended to address specific and newly arising concerns.

Learn more about the Convention

Learn more about the research conducted in support of the Convention

US Department of State FAQ regarding Chilean sea bass

Last updated by Office of International Affairs, Trade, and Commerce on 11/08/2022