Small Genetic Difference Determines Chinook Salmon Migration Timing, New Study Shows
October 29, 2020
The annual migration of Chinook salmon up West Coast rivers from the ocean has enriched ecosystems, inspired cultures, and shaped landscapes. Yet the timing of their migration is controlled by one small section of their genome. This is the first time scientists have linked a single gene region to such an influential difference in a vertebrate species.

Researchers Probe Deaths of Central Valley Chinook, with Possible Ties to Ocean Changes
October 28, 2020
Scientists from several fish and wildlife agencies have launched a rapid research and response effort for deficiency of thiamine, or Vitamin B1. This deficiency was recently found to be increasing juvenile mortality among Chinook salmon in California’s Central Valley.

The Natural Portfolio: Spring-run Chinook salmon - essential to life history diversity
May 8, 2020 (U.S. Fish and Wildlife Service)
The life history strategy of spring-run Chinook salmon is not only critical to the genetic diversity of the species and the economy for fishing, but also provides a vital source of food and other cultural value for indigenous people of the Klamath Basin.

Spinal Deformities in Sacramento-San Joaquin Delta Fish Linked to Toxic Mineral Selenium, New Research Shows
February 24, 2020
Native fish discovered with spinal deformities in California’s Sacramento-San Joaquin Delta in 2011 were exposed to high levels of selenium from their parents and food they ate as juveniles in the San Joaquin River. Ear bones of fish revealed “diary of selenium exposure” that was key to unraveling the mystery.

“Blob” Research Reveals Environmental Effects That Shut Down Fishing and Hiked Whale Entanglements
January 27, 2020
An ecological pileup of unprecedented changes in the ocean off the West Coast beginning about 2014 led to record entanglements of humpback and other whales, putting the region’s most valuable commercial fishery at risk.

Salmon Lose Diversity in Managed Rivers, Reducing Resilience to Environmental Change
December 5, 2019
The manipulation of rivers in California is jeopardizing the resilience of native Chinook salmon. It compresses their migration timing to the point that they crowd their habitats and may miss the best window for entering the ocean and growing into adults.

Research Cruise to Survey Deep-Sea Corals, Sponges, and Fish Habitat Along the West Coast
October 17, 2019
A team of scientists and engineers left Newport, Oregon for a month-long research cruise along the West Coast to explore corals, sponges, and fish habitat on the ocean floor.

Floods Reshaped Carmel River Following 2015 Dam Removal, New Research Shows
October 15, 2018
Removal of the dam improved passage for the endangered steelhead native to the river and restored the physical and ecological processes that help create and maintain habitat for the fish in the long term.

Baby endangered California salmon use different rivers than expected, research shows
December 4, 2017 (Sacramento Bee)
Researchers found that juvenile winter-run Chinook aren’t just using the Sacramento River as rearing habitat. After hatching, they also venture in large numbers into the river’s tributaries, including creeks that feed into it below Redding, as well the Feather and the American rivers.

Scientists Call for Improved Technologies to Save Imperiled California Salmon
December 1, 2017
Scientists working to protect California’s most endangered salmon say in a new report that key improvements in tracking Sacramento River winter-run Chinook through California’s complex water delivery system would help recover the species while the water continues to flow. They recommend upgrades in tracking technology from tiny transmitters implanted into juvenile fish to wider use of genetic fingerprinting to unravel how the fish travel through rivers and canals in California’s Central Valley to the ocean and why many disappear along the way.

New NOAA Fisheries Research Reveals Ecosystem Cascades Affecting Salmon
July 28, 2017
In the Gulf of the Farallones, researchers found that a small ocean seabird can make a difference in the number of salmon that survive to return as adults. This is especially true when ocean conditions cause the birds to feed primarily on salmon and anchovy.

Scientists Improve Predictions of How Temperature Affects the Survival of Fish Embryos
December 5, 2016
Scientists closely tracking the survival of endangered Sacramento River salmon faced a puzzle: the same high temperatures that salmon eggs survived in the laboratory appeared to kill many of the eggs in the river. Now the scientists from NOAA Fisheries and the University of California at Santa Cruz have resolved the puzzle, realizing new insights into how egg size and water flow affect the survival of egg-laying fish. The larger the eggs, they found, the greater the water flow they need to supply them with oxygen and carry away waste.

To Save Its Salmon, California Calls In the Fish Matchmaker
January 15, 2016 (New York Times)
At a hatchery on the Klamath River, biologists are using genetic techniques to reduce inbreeding.

November Takes a Bite Out of ‘the Blob’
December 10, 2015
The so-called “blob” of infamous warm ocean waters that has gripped the West Coast and shaken up its marine ecosystems in the past two years is battered, but not dead yet.

Changing Winds Explain Most Pacific Coast Warming
September 22, 2014
Changes in winds over the eastern Pacific Ocean explain most of the warming trend along the West Coast of North America in the last century. Similar atmospheric shifts can drive trends in sea surface and coastal air temperatures that extend over a century or more.

Unusual North Pacific Warmth Jostles Marine Food Chain
September 8, 2014
Scientists across NOAA Fisheries are watching a persistent expanse of exceptionally warm water spanning the Gulf of Alaska that could send reverberations through the marine food web. The warm expanse appeared about a year ago and the longer it lingers, the greater potential it has to affect ocean life from jellyfish to salmon. 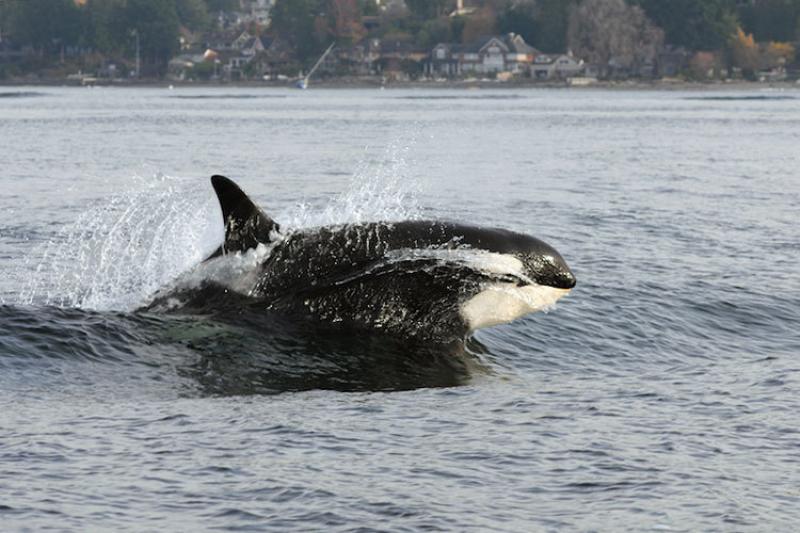