A Facility of the Alaska Fisheries Science Center 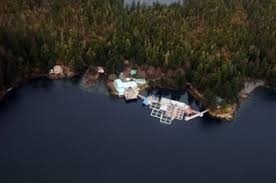 The Little Port Walter (LPW) research station is the primary field research facility of the Auke Bay Laboratory and is located 110 miles south of Juneau, Alaska, near the southeastern tip of Baranof Island. LPW is the oldest year-round biological research station in Alaska and has been host to a wide variety of fisheries research projects since 1934. The station is on U.S. Forest Service land in the Tongass National Forest and is accessible only by boat or seaplane. Personnel stationed at LPW range from a mid-winter low of 2 to a summertime high of 25 to 30 researchers and support staff, depending on the requirements of the various experiments underway.

Little Port Walter is located in a estuarine environment adjacent to Chatham Strait near the open Gulf of Alaska. There are numerous nearby lakes and streams which are available for salmonid experimentation and research. Research facilities include an experimental hatchery and an array of fresh- and saltwater floating raceways and net-pens served by a controlled water source capable of delivering 900 gallons per minute. These facilities are used to conduct a variety of fish rearing studies, some of which can extend over a period of several years. Chinook salmon from three distinct genetic lines, chum salmon, pink salmon, and steelhead trout, are the principal species under study at LPW.

Little Port Walter is comprised of 11 buildings. The main building, built in the 1930s using Civilian Conservation Corps labor and materials from an abandoned saltery, is a three-story brick structure which is used as a dormitory/residence, laboratory, and mess hall. Other facilities include two wet-laboratories, a warehouse, wood and metal shops, a conference room, a floating wet-lab and feed shed, several residences for researchers and maintenance staff, and a permanent concrete fish weir on nearby Sashin Creek, which flows into the head of the inner bay at LPW. This stream has natural runs of pink, chum, and coho salmon as well as Dolly Varden char and steelhead trout.