Before a species can receive the protection provided by the Endangered Species Act, it must first be added to the federal lists of endangered and threatened wildlife and plants. A species is added to this list when we determine that it has met definition of endangered or threatened under the Act. Learn more about the process.

How Do Species Become Protected Under the Endangered Species Act?

Before a species can receive the protection provided by the Endangered Species Act (ESA), it must first be added to the federal lists of endangered and threatened wildlife and plants. A species is added to this list when we determine that it has met definition of endangered or threatened under the ESA. Species may also be removed from the list (i.e., “delisted”) when they no longer require ESA protection, or have a change in status (i.e., “reclassified”, for example, from threatened to endangered).

Under the ESA, a species must be listed if it is threatened or endangered because of any of the following 5 factors:

The process by which we evaluate whether a species should be added or removed from the list, or reclassified in status, is commonly referred to as the “Listing Process.” The steps of this process are described in more detail below.

Note: once a species is listed under the ESA, NOAA Fisheries must determine whether there are areas that meet the definition of critical habitat.

Learn more about the process of designating critical habitat

What Starts the Listing Process?

There are two ways by which a species may come to be listed (or delisted) under the ESA:

How Do You Evaluate A Petition You Receive?

The following diagram shows the steps we take to evaluate a petition to list, delist, or reclassify a species. 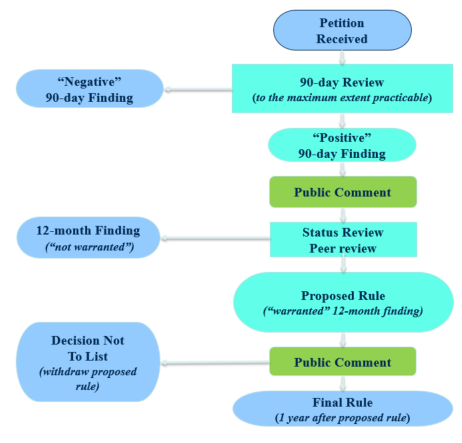 After receiving a petition, within 90 days (to the maximum extent practicable), we must publish a finding that states our decision whether or not to accept the petition.

If we find that the petition:

>For listing petitions, the species is now considered to be a “Candidate” for listing under the ESA. View Candidate species.

After we publish a positive 90-day finding, we begin a review of the species’ status.  This scientific review involves collecting and analyzing the best available scientific and commercial information on the species, including its biology, ecology, abundance and population trends, and threats to the species, in order to evaluate the species’ current status and extinction risk. This information is generally presented in a Status Review document (but may also be contained in a 5-year review or entirely in the 12-month finding Federal Register notice).

Within one year of the date the petition was received, if, after conducting the review of the species’ status and considering ongoing conservation efforts, we determine that the petitioned request—

After publishing a proposed rule to list, reclassify, or delist a species, we consider the public comments received and any new data that may have become available to make a final decision. We may also withdraw the proposed rule if we find there is not sufficient evidence to justify the proposed action.

The final rule is generally published in the Federal Register within one year of the date of the proposed rule (however, this time period may be extended under certain circumstances).

View delisted species under the ESA

What is the Self-Initiated Process?

When we voluntarily choose to examine the status of a species, many of the steps are similar to the Petition Process. However, we are not bound by the statutory deadlines associated with the Petition Process (specifically the 90-day finding and 12-month finding steps).