Once a species is listed under the Endangered Species Act, NOAA Fisheries evaluates and identifies whether any areas meet the definition of critical habitat. Those areas may be designated as critical habitat through a rulemaking process.

Critical habitat is habitat needed to support recovery of listed species. When a species is listed under the Endangered Species Act, NOAA Fisheries is required to determine whether there are areas that meet the definition of critical habitat.

The designation of an area as critical habitat does not create a closed area, marine protected area, refuge, wilderness reserve, preservation, or other conservation area; nor does the designation affect land ownership. Rather, once critical habitat is designated, other federal agencies consult with NOAA Fisheries to ensure actions they fund, authorize, or undertake are not likely to destroy or adversely modify the critical habitat.

Critical habitat is defined as:

We are required to designate critical habitat based on the best available scientific data. We must also consider the economic, national security, and other relevant impacts of specifying a particular area as critical habitat. Areas owned or controlled by the U.S. Department of Defense are exempt from a critical habitat designation if we determine that a signed Integrated Natural Resources Management Plan provides a benefit to the species—these plans are required under the Sikes Act. Critical habitat cannot be designated within foreign countries or in other areas outside of U.S. jurisdiction.

Once critical habitat is designated, federal agencies must consult with us to ensure that any activities they authorize, fund, or carry out are not likely to destroy or adversely modify the critical habitat.

Critical habitat requirements do not apply to citizens engaged in activities on private land that do not involve a federal agency (for example, a private landowner undertaking a project that involves no federal funding or permitting). The designation of critical habitat does not affect land ownership or establish a refuge, wilderness reserve, preserve, or other special conservation area. Critical habitat designations also do not mandate government or public access to private lands.

Over time, critical habitat for a species may need to be revised based on new information that has become available since the publication of the critical habitat designation. This revision process can occur in one of two ways under the ESA:

2. We voluntarily choose to examine whether it is warranted to revise the critical habitat for a species.

This diagram shows the general steps we take to evaluate a petition to revise critical habitat for an ESA-listed species. 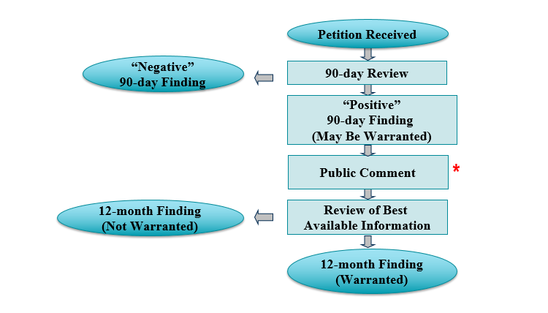 After receiving a petition to revise critical habitat, we must publish a finding within 90 days (to the maximum extent practicable) that states our decision about whether to accept the petition.

Within 1 year of the petition date, if—after reviewing the best scientific data available—we determine that a revision to the species’ critical habitat is:

After publishing a proposed rule to revise a species’ critical habitat, we consider the public comments received and any new data that may have become available to make a final decision. We may also withdraw the proposed rule if we find there is insufficient evidence to justify the proposed action.

The final rule is published in the Federal Register generally within one year of the date of the proposed rule (this period may be extended under certain circumstances).

When we voluntarily choose to examine whether a revision to a species’ critical habitat is warranted, many of the steps are similar to the petition process described above; however, we are not bound by the statutory deadlines associated with the petition process (specifically the 90-day finding and 12-month finding steps). The following diagram shows the general steps we take for a self-initiated action.