Ringed seals are the smallest and most common Arctic seal. They get their name from the small, light-colored circles, or rings, that are scattered throughout the darker hair on their backs.

Ringed seals are circumpolar and are found in all seasonally ice-covered seas of the Northern Hemisphere and in certain freshwater lakes. Throughout their range, ringed seals have an affinity for ice-covered waters and are well-adapted to occupying heavily ice-covered areas throughout the fall, winter, and spring by using the stout claws on their foreflippers to maintain breathing holes in the ice. Ringed seals remain in contact with the ice most of the year and normally pup and nurse pups on the ice in snow-covered lairs (snow caves) in late winter through early spring. The ice and snow caves provide some protection from predators, though polar bears spend much of their time on sea ice hunting ringed seals, which are their primary prey. Snow caves also protect ringed seal pups from extreme cold. Loss of sea ice and snow cover on the ice poses the main threat to this species.

There is one recognized stock of (Arctic) ringed seals in U.S. waters: the Alaska stock. The estimated population size for this stock is over 300,000 individuals.

Although subsistence harvest of Arctic ringed seals occurs in some parts of this subspecies’ range, harvest levels appear to be sustainable. While the United States does not allow commercial harvest of marine mammals, such harvests are permitted in other portions of the species’ range. This has caused population declines in some regions in the past but have generally been restricted since then.

Ringed seals have a small head; a short cat-like snout; and a plump body. Their coat is dark with light-colored rings on their back and sides, and a light-colored belly. Their small foreflippers have thick, strong claws that are used to maintain breathing holes through 6 feet or more of ice.

Ringed seals grow to an average length of 4 to 4.5 feet with weights ranging from 110 to 150 pounds. The average weight of a ringed seal pup at birth is about 10 pounds.

Ringed seals eat a wide variety of mostly small prey. They rarely prey on more than 10 to 15 species in any specific geographic location, and not more than two to four of these species are considered important prey. Despite regional and seasonal variations in the diet of ringed seals, fishes of the cod family tend to dominate the diet in many areas from late autumn through spring. Crustaceans appear to become more important in many areas during the open-water season and often dominate the diet of young seals. While foraging, ringed seals dive to depths of up to 150 feet or more.

Ringed seals can live in areas that are completely covered with ice. They use their sharp claws to make and maintain their own breathing holes through the ice, which may be 6 feet or more in thickness. In winter through early spring, they also carve out lairs in snowdrifts over their breathing holes. As the temperatures warm and the snow covering their lairs melts during spring, ringed seals transition from lair use to basking on the surface of the ice near breathing holes, lairs, or cracks in the ice as they undergo their annual molt. Ringed seals do not live in large groups and are usually found alone, but they may occur in large groups during the molting season, gathered around cracks or breathing holes in the ice.

Ringed seals are circumpolar and range throughout the Arctic Basin and southward into adjacent seas, including the Bering and Labrador Seas. They are also found in the Sea of Okhotsk and Sea of Japan in the western North Pacific and the Baltic Sea in the North Atlantic. Landlocked populations inhabit Lakes Ladoga (Russia) and Saimaa (Finland).

During winter and spring in the United States, ringed seals are found throughout the Beaufort and Chukchi Seas; they occur in the Bering Sea as far south as Bristol Bay in years of extensive ice coverage. Most ringed seals that winter in the Bering and Chukchi Seas are thought to migrate northward in spring with the receding ice edge and spend summer in the pack ice of the northern Chukchi and Beaufort Seas.

Sexual maturity in ringed seals varies with population status. It can be as early as 3 years for both sexes and as late as 7 years for males and 9 years for females. Ringed seals breed annually, with timing varying regionally. Mating takes place while mature females are still nursing their pups on the ice and is thought to occur under the ice near birth lairs.

In all subspecies except the Okhotsk, females give birth to a single pup hidden from view within a snow-covered birth lair. Ringed seals are unique in their use of these birth lairs. Although Okhotsk ringed seals have reportedly used them, this subspecies apparently depends primarily on the protective sheltering of ice hummocks (rounded hills of ice). Pups learn how to dive shortly after birth. They are nursed for as long as 2 months in stable ice that is fastened to the coastline and for as little as 3 to 6 weeks in moving ice. Pups are normally weaned before the break-up of spring ice.

Many aspects of the ringed seal’s life cycle depend directly on the species’ sea ice habitat. As such, the ongoing and anticipated reductions in the extent and timing of ice cover, especially on-ice snow cover, stemming from climate change (warming) poses a significant threat to this species.

The continuing decline in summer sea ice in recent years has renewed interest in using the Arctic Ocean as a potential waterway for coastal, regional, and trans-Arctic marine operations, which pose varying levels of threat to Arctic ringed seals depending on the type and intensity of the shipping activity and its degree of spatial and temporal overlap with the seals. Offshore oil and gas exploration and development could also impact ringed seals. The most significant risk that these activities pose is accidentally or illegally discharging oil or other toxic substances, which would have immediate and potentially long-term effects. Ringed seals could also be directly affected by noise and physical disturbance of habitat associated with such activities.

NOAA Fisheries is committed to the protection and management of ringed seals. In the United States, management actions taken to secure protections for these seals include:

Learn more about our management and protection efforts

Our research projects have discovered new aspects of ringed seal biology, behavior, and ecology, which help us better understand the challenges that all ringed seals face. Our work includes:

In Alaska, report a sick, injured, entangled, stranded, or dead animal to the Alaska Marine Mammal Stranding Hotline at (877) 925-7773 to make sure professional responders and scientists know about it and can take appropriate action.

Numerous organizations around Alaska are trained to receive reports and respond when necessary.

Call the NOAA Fisheries Enforcement Hotline at (800) 853-1964 to report a federal marine resource violation. This hotline is available 24 hours a day, 7 days week for anyone in the United States. 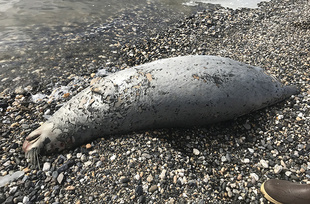 Alaska Natives have a long history of self-regulation to ensure a sustainable take of marine mammals for food and handicrafts.

We work with volunteer networks in all coastal states to respond to marine mammal strandings. When stranded animals are found alive, NOAA Fisheries and our partners assess the animal’s health. When stranded animals are found dead, our scientists work to understand and investigate the cause of death. Although the cause often remains unknown, scientists can sometimes identify strandings due to disease, harmful algal blooms, vessel strikes, fishing gear entanglements, pollution exposure, and underwater noise. Some strandings can serve as indicators of ocean health, giving insight into larger environmental issues that may also have implications for human health and welfare.

To understand the health of ice seal populations, our scientists work with our stranding network partners to collect data on all marine mammal strandings and investigate UMEs. UMEs can serve as indicators of ocean health, giving insight into larger environmental issues that may also have implications for human health and welfare.

On December 28, 2012, after completing a comprehensive status review of the species and issuing a 12-month finding on a petition to list it as threatened or endangered under the ESA, NOAA Fisheries published a final rule listing the Arctic, Okhotsk, and Baltic subspecies as threatened, and the Ladoga subspecies as endangered. NOAA Fisheries also concluded in its 12-month finding that the Saimaa subspecies of ringed seal is in danger of extinction throughout its range, consistent with its previous listing (in 1993) as endangered. NOAA Fisheries vacated the threatened listing of Arctic ringed seals in March 2016 due to litigation, and reinstated it in May 2018. All ringed seals in Alaska are part of the threatened Arctic subspecies.

Listing 4 Subspecies of Ringed Seals (Arctic, Okhotsk, Baltic and Ladoga) Under the ESA

NOAA Fisheries has issued an incidental harassment authorization (IHA) to the Office of Naval Research (ONR) to incidentally harass, by Level B harassment only, marine mammals during Arctic Research Activities in the Beaufort and Chukchi Seas. ONR’s…
Notice
,
Alaska

In accordance with the regulations implementing the Marine Mammal Protection Act (MMPA) as amended, notification is hereby given that NOAA Fisheries has issued an incidental harassment authorization (IHA) to the U.S. Navy's Office of Naval Research (ONR…
Notice
,
Alaska
Foreign

NOAA Fisheries issued an incidental harassment authorization (IHA) to Scripps Institution of Oceanography to incidentally harass, by Level B and Level A harassment, marine mammals during a low-energy marine geophysical survey in the Northwest Atlantic…
Notice
,
New England/Mid-Atlantic

NOAA Fisheries issued regulations to govern the unintentional taking of marine mammals incidental to construction and operation of the Liberty Drilling and Production Island (LDPI) in the Beaufort Sea, Alaska over the course of five years.  These…
Final Rule
,
Alaska

NOAA Fisheries conducts a variety of research on the biology, behavior, and ecology of ringed seals. The results of this research are used to inform management decisions and enhance protection efforts for this species. Molecular genetic techniques are being applied to a number of taxonomic, evolutionary and demographic questions in ribbon, ringed, spotted, and bearded seals, including the relationships among the different species and the population structure and dispersal patterns within each species. For example, NOAA Fisheries recently initiated a collaborative research project with the Alaska Department of Fish & Game to determine whether mtDNA would be informative in resolving questions of population and stock structure in ringed, bearded and ribbon seals. Initial efforts are revealing high levels of genetic variation in all species.

The Polar Ecosystems Program’s ongoing research on abundance, distribution, migration, and foraging behavior of ringed seals in Alaska helps us to understand their role of ringed seals in the marine ecosystem and inform management decisions for the conservation of this species.

Map of Proposed Critical Habitat for the Arctic Ringed Seal