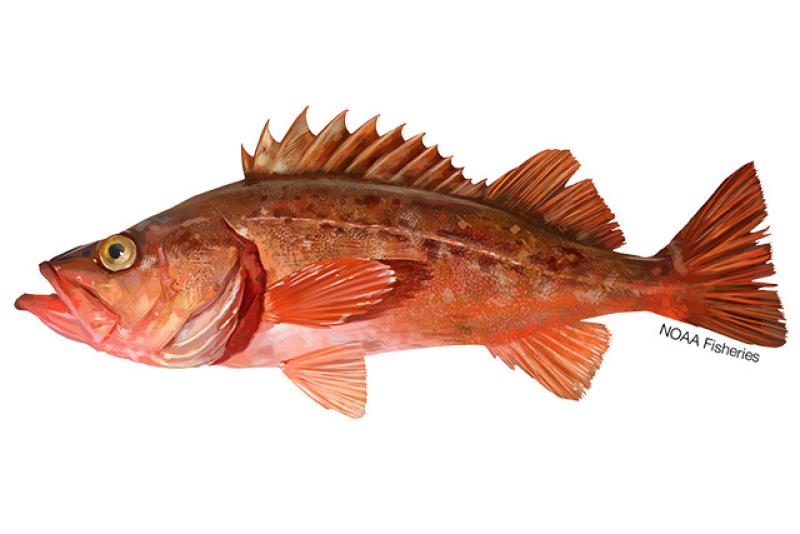 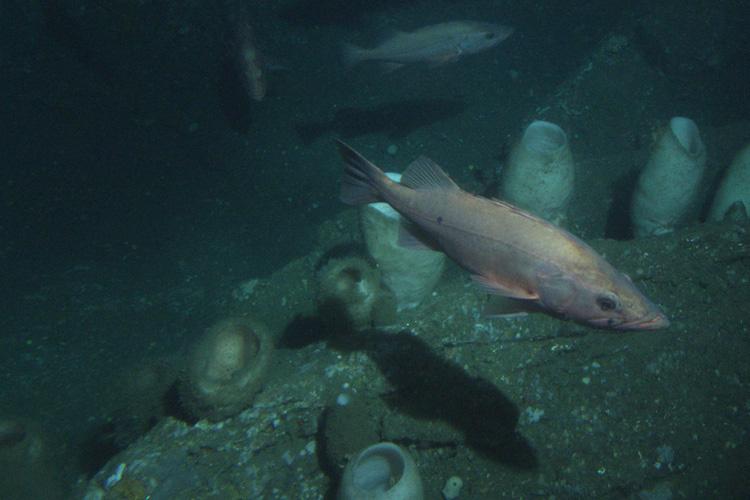 Bocaccio are large Pacific coast rockfish that are moderately slow-growing, late to mature, and long-lived. They range from Punta Blanca, Baja California, to the Gulf of Alaska off Krozoff and the Kodiak Islands, but are most common between Oregon and northern Baja California. Having struggled to recover from overfishing, the Puget Sound/Georgia Basin distinct population segment (DPS) of bocaccio is listed as endangered under the Endangered Species Act.

Non-ESA listed populations of bocaccio are harvested in commercial and recreational fisheries.  Bocaccio were overfished (southern subpopulation) in the West Coast groundfish fishery and recovered well ahead of schedule.

Learn about bocaccio fisheries off the U.S. West Coast and Alaska

NOAA Fisheries is committed to conserving and protecting the Puget Sound/Georgia Basin DPS of bocaccio. Our scientists and partners use a variety of innovative techniques to study, learn more about, and protect this species.

Because all rockfish species are an important part of the food web, actions to support rockfish recovery would benefit the Puget Sound ecosystem. For instance, larval rockfish are a food source for juvenile salmon and other marine fish and seabirds.

Rockfish are vulnerable to overfishing because many species do not begin to reproduce until they are 5-20 years old, and very few of their young survive to adulthood. Bocaccio can live over 50 years, and yelloweye rockfish approach up to 150 years. These traits make them susceptible to overfishing and habitat degradation.

The Puget Sound/Georgia Basin distinct population segment of bocaccio is listed as endangered under the Endangered Species Act.

This recovery plan outlines actions and research for the conservation and survival of threatened yelloweye rockfish and endangered bocaccio using the best available science per the requirements of the Endangered Species Act (ESA).

Kelp is a vital habitat for rockfish and numerous additional species including forage fish, invertebrates, birds, and salmon. We have partnered with a consortium of regional kelp experts to develop the Puget Sound Kelp Conservation and Recovery Plan, which was released in May of 2020.

In 2014, NOAA Fisheries issued a final rule to designate critical habitat for the Puget Sound/Georgia Basin DPS of bocaccio.

The Washington Department of Fish and Wildlife (WDFW) submitted applications to us for four scientific research permits and one incidental take permit under the Endangered Species Act. WDFW prepared a conservation plan to minimize and mitigate effects on listed species. The permit applications are related to scientific research and fisheries management measures in Puget Sound/Georgia Basin, potentially affecting nine ESA-listed fish populations, including bocaccio and yelloweye rockfish. Following a public comment period, we released the final documents on WDFW's permit applications on November 6, 2012.

View presentations from the workshop

Removal of the Puget Sound/Georgia Basin Canary Rockfish DPS From the Federal List of Threatened and Endangered Species; and Update and Amendment to

Removal of the Puget Sound/Georgia Basin DPS of Canary Rockfish From the Federal List of Threatened and Endangered Species; Update and Amend the

Rockfish in Puget Sound form part of the diverse marine community that attracts thousands of divers each year, yet monitoring rockfish populations is challenging due to their habitat usage and sporadic occurrence in Puget Sound. We must collect a large amount of information to assess rockfish recovery and divers can help! A large-scale effort is underway to measure recruitment of young of year (YOY; fish that have not yet reached one year of age) and we are engaging scuba divers to assist.

Assessing the numbers and locations of YOY rockfish will help us understand preferred habitats and population characteristics. Collecting this data across multiple years and comparing it with oceanic and climatic variables could clarify conditions that lead to successful reproduction. This effort is a key part of understanding what conditions lead to successful survival of young rockfish.

How can recreational divers help?

Download our YOY survey guide linked below and conduct your own survey!  Also, if you spot a YOY yelloweye rockfish, canary rockfish, or bocaccio while scuba diving, snap a picture and note your location. Then send it to us at rockfishid@noaa.gov. It's that simple! If you are not sure of the species, send it to us anyway.

Where can I find rockfish while diving?

Rockfish can be found anywhere in Puget Sound (including the San Juan Islands). We are currently developing a list of preferred sampling sites throughout Puget Sound that may inform dive locations. YOY rockfish can be found in a variety of habitats, so we encourage you to branch out and try different dive sites that may feature eelgrass, kelp, rocky reef, or soft-bottom. You never know when you will find a new favorite dive site!

To prepare for participation, check out our YOY survey guide for instructions and assistance with species identification. Most importantly, keep diving in Puget Sound and start (or continue) keeping an eye out for juvenile rockfish!

Is your dive club interested in learning more about rockfish?

We would be happy to speak at your dive club and will do our best to make it to one of your meetings. For more information, you may contact: