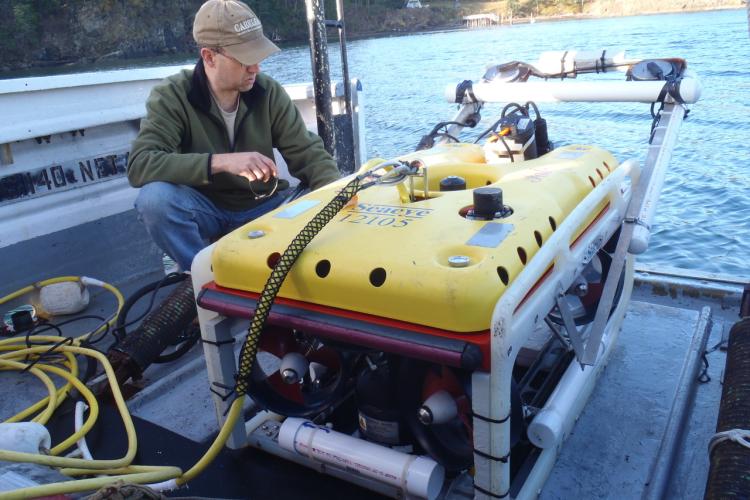 As the remotely operated vehicle (ROV) slips beneath the surface of the water, Bob Pacunski takes the controls to navigate the ROV deep into Puget Sound. He and his crew are atop a boat from which the ROV was launched, its long cord reaching down to the depths of the Sound—a place too deep for divers and relatively unknown, a place few have ever seen.

Few people in the world can do Pacunski’s job, but he casually jokes that using the controls to operate the ROV, which is much like a video game controller, is fun and relatively easy. As he navigates the ROV hundreds of feet below the surface, the seafloor comes to life on a screen positioned near him. Pacunski has been training for this job his entire life. He became a certified scuba diver at age 15 and studied marine biology through graduate school. In 1991, he joined the Washington Department of Fish and Wildlife, where he has been working for the past 23 years to ensure marine resources are available for future generations.

With over 2,200 scuba dives and countless hours operating the ROV, Pacunski’s expertise is contributing to the future of nearly 30 rockfish species in Puget Sound, three of which are listed under the Endangered Species Act (ESA) — endangered Puget Sound/Georgia Basin bocaccio, and threatened yelloweye rockfish and canary rockfish. He is collecting data on the populations’ size, range, and habitat use. While some rockfish species in Puget Sound may be healthy, others have dropped dramatically in number. Many rockfish species closely resemble one another, which makes identifying them difficult and further compounds the challenge of protecting and recovering the vulnerable populations. The data collected through Pacunski’s survey work will provide managers working to protect and recover the at-risk species with valuable information.

ROV surveys are presently the most sound and cost-effective way to estimate the abundance of vulnerable populations of rockfish in Puget Sound. The ROV can descend to depths unreachable to divers and into rocky habitats, which are often difficult to reach through fishing. Perhaps most importantly, ROVs provide a way to survey rockfish without actually catching them. Adult bocaccio, yelloweye rockfish, and canary rockfish are all typically found in deep waters and could experience adverse effects from other survey methods.

“Like a diver ascending quickly from great depths,” explains Pacunski, “rockfish brought to the water’s surface can experience severe injury.” That injury is known as barotrauma, a phenomenon that occurs when gases expand in the fish’s body making it buoyant and unable to descend upon release.

With Puget Sound/Georgia Basin bocaccio, canary rockfish, and yelloweye rockfish species already at low levels, limiting any undue impact on them is vital. With ROVs, scientists can survey these fish in their habitat with little disturbance and no handling. ROV surveys are also much less expensive than many other surveying options.

Pacunski’s surveying work will soon be expanded to include studies on age, thanks to funding from NOAA Fisheries and the Washington Department of Fish and Wildlife. Pacunski and his team will use newly acquired underwater cameras to determine the age of rockfish, which can exceed 100 years, by examining their length. Because females produce more young as they age, managers will gain a better understanding of the populations’ reproductive potential by collecting this age data.

Over the course of Pacunski’s career, he has witnessed Puget Sound transform into a booming urban epicenter. “This has negative effects on water quality and shoreline nursery habitats for rockfish,” he says. “Fortunately, I’m seeing a shift in people’s attitudes and a greater sense of environmental stewardship. People realize there’s a long-term trade-off between harvest and conservation. And like me, they want their children to experience a diversity of life in Puget Sound.”

Though Pacunski’s work is filling critical data gaps that will inform recovery of the three ESA-listed rockfish, he shows great humility for his work and seeks only to leave a positive impact for future generations. When asked what individuals can do to help recover Puget Sound’s vulnerable rockfish species, Pacunski’s message is clear—education.

“When people educate themselves about their resources and their actions, it leads to informed decision making,” he says. “We need to work together to find ways to avoid catching the vulnerable rockfish species, communicate methods for safely releasing them, and educating people about the regulations put in place to protect them.” Pacunski also notes that education often translates into important actions in thousands of homes, such as being mindful of what is discarded in household and roadside storm drains, which all end up in Puget Sound.

NOAA Fisheries is developing a plan to recover Puget Sound’s threatened and endangered rockfish populations, and Pacunski’s work is informing these efforts. With the support of technical innovation, research initiatives, protective regulations, and partnerships, we will work to recover the three listed rockfish species and try to ensure the remaining populations never require the same protections. Efforts to restore Puget Sound/Georgia Basin bocaccio, yelloweye rockfish, and canary rockfish will go far beyond their recovery, however. Restoring these species to healthy numbers also contributes to the health of Puget Sound and other marine life, like salmon, all of which are integral to the Pacific Northwest’s economy and culture.