Revealing the Unknowns of an Unusual Catch

An observer brought in an unusual, unidentified shark that was caught on a longline. Find out what scientists learned from it. 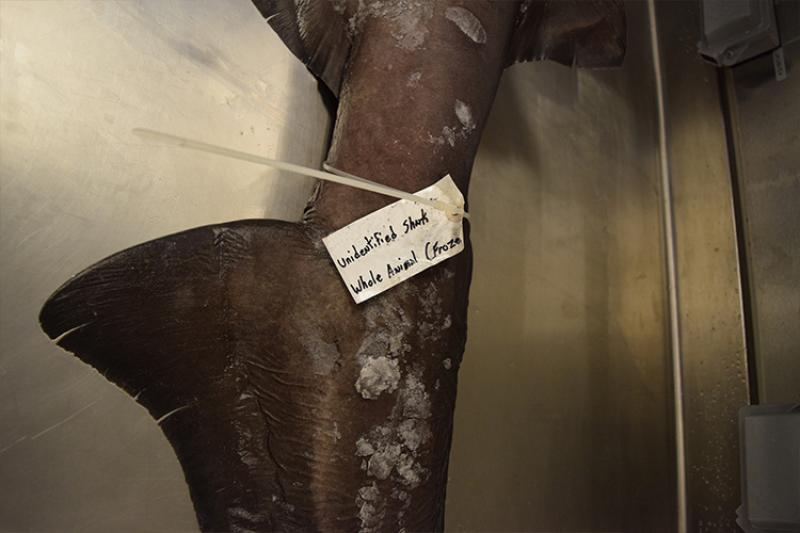 At first, they had no idea what it was.

It was late Spring, and the waters northeast of the Big Island of Hawai‘i were calm and flat. Things seemed uneventful. But, suddenly, the crew of the longliner felt something heavy tug on the longline. They slowed down the ship.

As the crew brought up the line, the creature popped up out of the water.

"The first thought for me was, "We got a whale!'" says Erin Emanuel, an observer with the NOAA Fisheries Pacific Islands Regional Office who was on the ship to document its catches and the crew's activities. "But it looked 'one-off.' The tail was wrong."

Not knowing what the animal was, some of the crew wanted to cut the line, setting it free. But Emanuel asked the crew to bring it on to the ship.

"I had never seen anything like it," Emanuel says. "I knew it was something different. I figured it was a deepwater shark."

Once the marine creature was on the ship, Emanuel and the ship's crew and captain could get a closer look at it. The captain knew, immediately, that there was no monetary value to be gained by keeping the still-alive animal and argued that it would need to be thrown back into the ocean. But Emanuel reasoned that it had, at least, scientific value.

"I knew it was a sixgill," Emanuel says, referring to a type of deepwater shark with six gills on each side of its body, compared with the usual five that most shark species have. "I don't know much about it but I can count six gills." Such a species, he figured, would be of great value to the Pacific Islands Fisheries Science Center (PIFSC) and now-retired Bob Humphreys, who at the time led PIFSC's Life History Program. 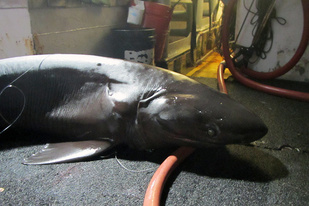 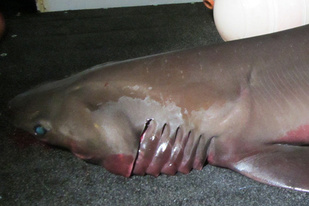 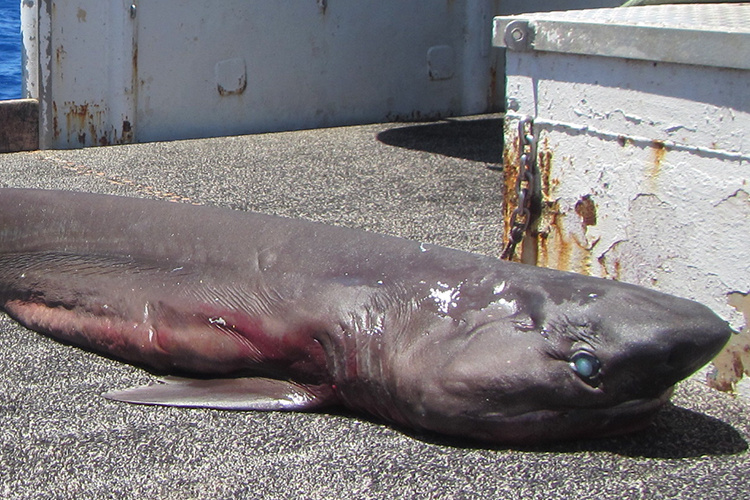 Longliners caught a shark with six gill slits on each side its body, one more than most sharks in the ocean have.

Emanuel argued with the captain to keep the nearly 9-foot long shark, countering each of his objections with a logical response. "We went back and forth, but I finally got them convinced to bring it in," he says. Emanuel, with the deck boss's help, shoveled ice below the deck to make room for the shark, covered the shark with a tarp, and put it on ice.

When the ship returned to port in Honolulu, Humphreys and shark expert Jerry Crow from the Waikīkī Aquarium were there to meet Emanuel and his shark. "It looked a little different than I thought it would," Humphreys recalls. "But it would be the first time we ever had an opportunity to dissect one."

A Rare and Unusual Catch

When Humphreys and Crow first heard that Emanuel had a sixgill shark, they hoped it would be the bigeye sixgill. This species, Humphreys says, is known to inhabit the western Pacific Ocean around places such as Japan and Taiwan, but has not been recorded near Hawai‘i. But once they looked at the shark on the docks, it seemed more likely that it was a bluntnose sixgill, which is far more common than the bigeye and not a stranger to Hawaiian waters. 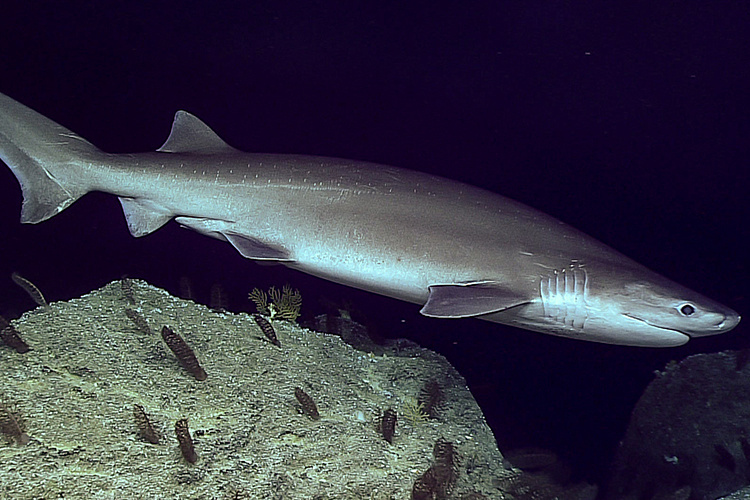 Still, the catch was significant.

While the bluntnose sixgill is not rare in Hawai‘i, it is rare to be caught on a pelagic longline, which only reaches relatively shallow depths. Emanuel estimates the shark was caught at a 200- to 300-foot depth — far shallower than where the sixgills are normally found. "Usually, in Hawai‘i, 900 to 3,000 feet is the more typical range," Crow says. But, he notes, recent research from the University of Hawai‘i, published in 2015 in the journal Deep Sea Research Part II: Topical Studies in Oceanography, suggests that the bluntnose sixgill sharks around Hawai‘i may move up the water column at night to follow prey, and this catch appears to corroborate the research. Unfortunately for this bluntnose, its prey was attached to a longline hook.

After Emanuel brought the shark back to port, Humphreys put it in a deep freezer at PIFSC on Ford Island, O‘ahu. A few months later, he thawed it out and, with his staff's and Crow's help, carefully inspected the fish and measured it to try to make a positive identification. In all, the team took 60 measurements.

The fish matched the description of the bluntnose sixgill shark from the scientific literature. It was 8.86 feet in length, weighed 200 pounds, and appeared a bit thin. The shark's size suggests it was immature — males typically don't mature until they're about 10-feet long and females don't mature until they're 12-feet long, Crow explains. And some large adults have been estimated to be 18-feet long or more. 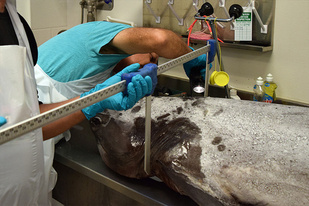 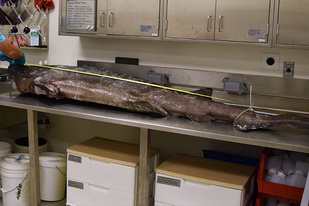 Bluntnose sixgill sharks are one of the most widely distributed sharks and are found in both temperate and tropical coastal waters throughout the Pacific, Atlantic, and Indian Oceans. And though they're typically deepwater fish, the sharks are sometimes also found in some surprisingly shallow waters, such as Puget Sound in Washington State. It's thought that there's just one global species of this shark, but if the new specimen is genetically different it could suggest there's more than one species of the bluntnose sixgill.

After measuring the shark, Crow sent a tissue sample to Gavin Naylor, a professor of biology at the College of Charleston in South Carolina, who then compared the immature sixgill's mitochondrial DNA — DNA in its mitochondria, the so-called powerhouse of the cell — with the mitochondrial DNA from shark samples from other areas of the globe. Its genetic sequence was virtually identical to a sixgill found in a fjord in Chile and only showed a 1 to 3 percent variation from sixgill sharks in Atlantic and Indonesian waters.

"At this point, all specimens sampled reveal one worldwide population," Crow says. This fact suggests that the sharks move around quite a bit, or at least enough that they breed over large areas in the ocean.

The next step for the researchers was to perform a necropsy (scientific term for autopsy), a procedure that could shine light on more unknowns about the elusive species.

In December, about six months after Emanuel put the sixgill shark on ice, Humphreys retrieved the large fish from a deep freezer at PIFSC. The next day, after the shark thawed, Humphreys and Crow donned large rubber gloves and boots and prepared to necropsy the shark as it lay on a large plastic drop cloth on the floor of the fish necropsy lab.

Crow made a small slice in the shark's back, just enough to peel back its skin and reveal the white muscle tissue underneath. With Humphreys' help, he carefully collected tissue samples and placed them in cryogenic vials that can be frozen. By analyzing the chemical composition of these tissues, scientists can gain a better understanding about the shark's diet and nutrition. 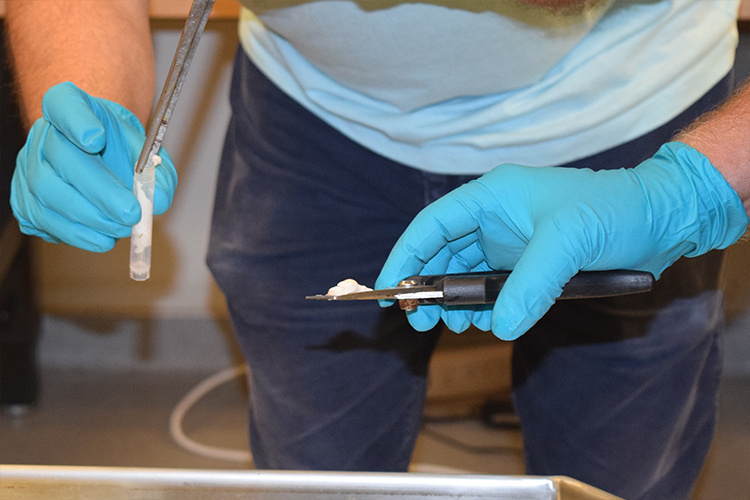 White muscle tissue can be used to gain a better understanding of the shark's diet and nutrition.

The pair flipped the shark over and cut an opening into its underside using a large serrated knife, revealing the innards. The length of the body cavity was filled with the shark's liver — this large size is important for buoyancy. The researchers collected numerous liver samples, which can be analyzed for pesticides, heavy metals, and other contaminants.

"This one doesn't have a super distinct scent," Humphreys commented after a while. This lack of an unpleasant scent is thanks to Emanuel's quick acting in getting the shark on ice before decomposition set in, Crow adds.

The scientists then searched for the shark's gonads and found ovaries that were hardly developed at all, confirming that it was immature, as they suspected. "Even though it looked like a large shark, it was very much an immature female," Humphreys says after the necropsy. "It hadn't really gone through puberty yet."

Humphreys and Crow then removed the shark's stomach, hoping to find clues about the fish's recent meals. The thick stomach lining contained a kind of groove that would likely help it break down food. It hadn't, however, completely thawed and was filled with ice crystals, and it appeared to be empty. "People tend to think the animals are like eating machines, but they are not always feeding like that," Crow says. This particular shark may not have eaten anything recently before getting caught or may have even emptied its stomach contents after it was caught, as some fish are known to do. In any case, they collected samples of the crystalized digestive fluid for later analysis.

Likewise, the intestines, which contained a series of spiral valves that maximize food and nutrient extraction, didn't yield any useful information. "They had a fair amount of mucus but nothing that allows us to say anything about what the shark eats," Humphreys says.

The shark had six rows of comb-like teeth, some of which they removed — with much difficulty — for sampling. Concluding the necropsy, they also removed the shark's palm-sized eyes so that the lens can be radiocarbon dated to determine the shark's age. Interestingly, Crow explains, sixgill sharks can roll their eyes completely backwards to protect them while biting prey. 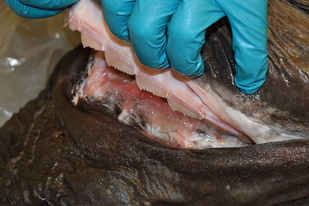 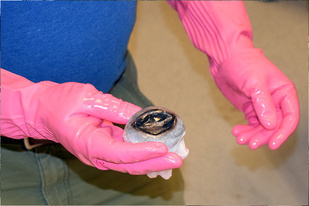 The bluntnose sixgill shark has comb-like teeth and palm-sized eyes.

The catch will hopefully help scientists learn more about the species, and it ultimately underscores the importance of having trained eyes and ears on the water, Humphreys says. "For every time we get a specimen like that, there must be 10 other things caught that are unusual that fly under the radar because there are no observers onboard," he says. "Without the observers, we wouldn't have a story."

Emanuel, for his part, enjoys finding unique species while fulfilling his observer duties onboard commercial fishing ships. "This is the kind of stuff I live for," he says. "Every day is Christmas out here."

NOAA Fisheries strives to conduct the best science for the benefit of our nation and the ecosystem. To support this effort, NOAA field personnel collect many different types of data, including biological samples to further our knowledge of the marine environment.

We do not take this approach without serious deliberations and considerations, and sometimes we make decisions with a heavy heart. We do, however, understand the extreme value of rare sampling opportunities such as this case. Bluntnose sixgill sharks are not necessarily rare in Hawai‘i but obtaining a specimen for biological and genetic studies is. We maximized the number of samples we collected from the shark to gain as much information as possible from one individual. Nothing went to waste. The information gleaned from this one individual will greatly increase our understanding of this species' basic biology and life history, including its distribution, size, age, growth, longevity, reproduction, nutrition, diet, and feeding ecology, as well as population structure. This type of information is crucial for the sustainable management of our local and global resources.