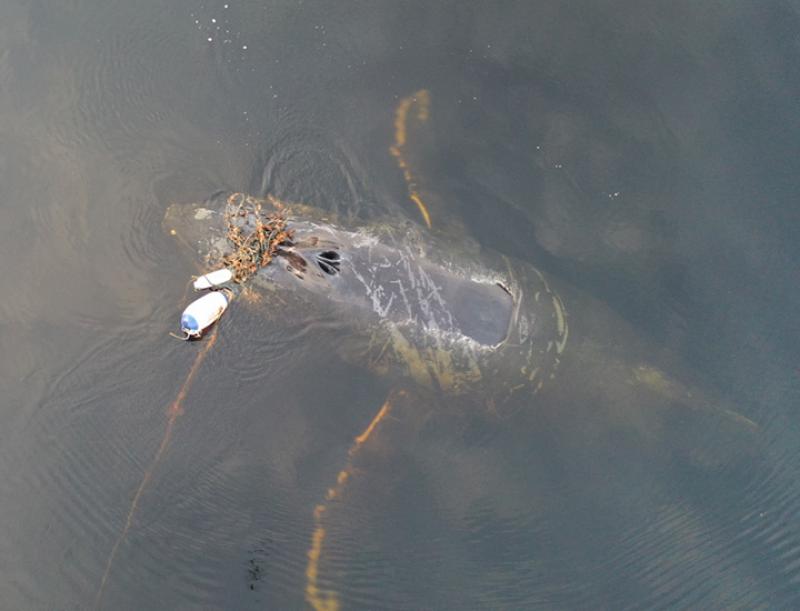 Dr. Fred Sharpe, an experienced member of the team and research biologist for the Alaska Whale Foundation was flown to the scene Wednesday morning to assess options for response. He consulted with NOAA’s lead large whale entanglement response expert Ed Lyman on safe strategies before attempting to disentangle the whale.

The subadult humpback was entangled around the upper jaw in heavy gauge lines used for mooring docks. The entanglement included two buoys and a dense snarl of lines, about the size of an ice chest.

Several lines were covering the leading edge of the blowhole, adding to the whale’s distress.

Chafing marks around the whale’s midsection suggested the animal initially had been ensnared in a full body wrap, perhaps immobilizing the pectoral flippers.

Although water visibility was poor Wednesday due to recent heavy rains, weather conditions were ideal for a disentanglement attempt, with calm winds and rainless skies. The whale was situated in a calm, protected bay.

The team’s initial approach to the whale indicated the animal was still energetic, and could easily become agitated—so the disentanglement team stood down and gave the whale plenty of room.

While the whale was thrashing its tail from side to side, its flukes apparently caught on the snarl, which pulled lines from the mouth. However, it then became entangled around its tailstock.

The whale eventually calmed down, giving the team an opportunity to carefully and safely approach. Sharpe used a long pole to slip a hooked knife with line attached on the entangling lines. The team then backed off and by pulling on the line, the knife efficiently cut through the ensnaring gear. The team made several cutting approaches before successfully removing all the gear.

With a gentle roll and swish of its tail, the whale swam completely free of the lines, and headed out to the mouth of the bay about 30 minutes before nightfall.

“We really had a great team,” said Fred Sharpe, “We all worked together to carefully and safely approach the animal and remove the gear.”

“Using the carbon fiber poles and specialized knives that NOAA folks sent with Fred made all the difference in getting the animal free,” added Scott Van Valin, owner of Island Air Express and El Capitan Lodge who assisted in the disentanglement.

Both Sharpe and Van Valin postponed their Thanksgiving plans to aid the entangled whale. 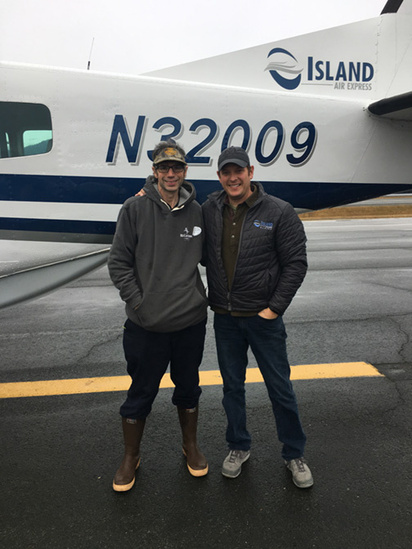 "From Scott Van Valin initially contacting NOAA Fisheries Tuesday to report a possibly life-threatening entanglement of a humpback whale, to his assisting in providing information and transportation to enable the NOAA response team to act efficiently and safely to aid the whale — he was instrumental in the success of this disentanglement effort,” said Sadie Wright, acting large whale entanglement response coordinator for NOAA Fisheries Alaska Regional Office. “We would like to commend Scott’s and Fred’s efforts during this event, which resulted in a safe, deliberate assessment and rescue.”

NOAA Fisheries would like to thank the following key partners in this effort: Island Air Express, El Capitan Lodge, and the Alaska Whale Foundation.

Mariners are asked to keep a sharp lookout for entangled marine mammals, but not to approach closely or attempt to free them. While well-intentioned, freeing a 40-ton animal is extremely dangerous for the animal and the would-be rescuer; people have lost their lives responding. Getting in the water is especially dangerous. Only trained and well-equipped responders that are authorized under NOAA Fisheries’ Marine Mammal Health and Stranding Response Program are permitted to disentangle whales.

If you see a marine mammal in distress, maintain 100 yards distance and please report it immediately to the NOAA Fisheries 24-hour Alaska Marine Mammal Stranding Hotline at (877)925-7773, or radio the U.S. Coast Guard on VHF channel 16, and they will relay the report.