Explore some of the most pristine coral reef ecosystems in the Pacific Ocean and learn about the Monument protection that ensure these special areas are conserved. 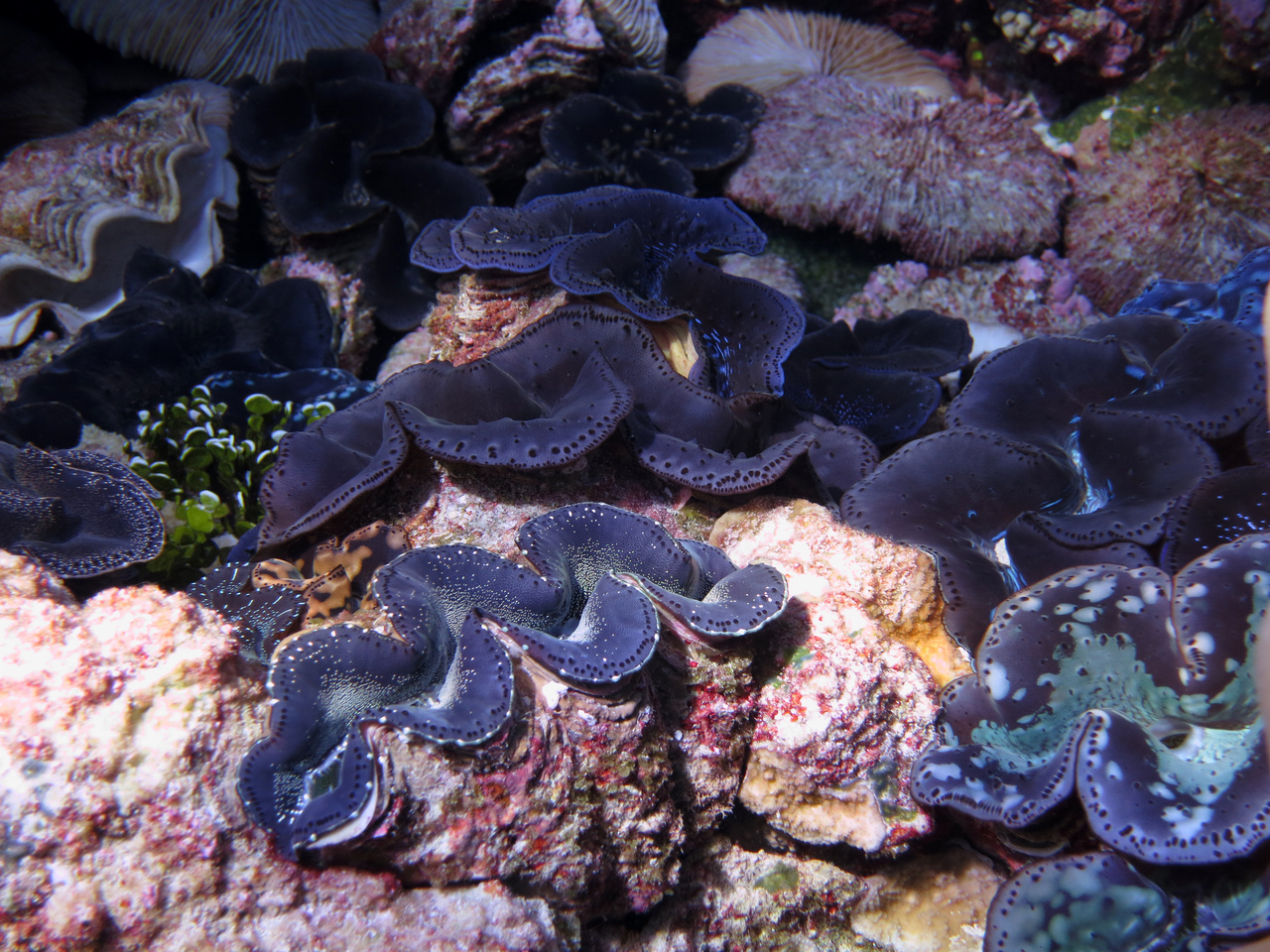 The Monument includes 165 known seamounts that are hotspots of species abundance and diversity. It is one of the most pristine tropical marine environments in the world, and vulnerable to the impacts of climate change and ocean acidification.

Established by Presidential Proclamation in January 2009 and expanded through Presidential Proclamation in 2014, the Pacific Remote Islands Marine National Monument is cooperatively managed by the Secretary of Commerce (NOAA) and the Secretary of the Interior (U.S. Fish and Wildlife Service), with the exception of Wake and Johnston Atolls, which are currently managed by the Department of Defense. National Wildlife Refuges also exist at each of the islands within the Monument, with Howland, Baker, and Jarvis designated as Refuges in 1974; Johnston in 1926; and Kingman and Palmyra in 2001. 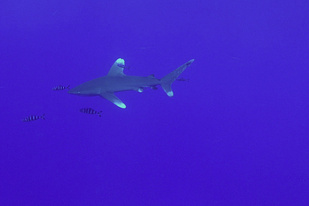 As the vehicles arrived back at the surface after the final dive of the expedition, viewers were treated to the sight of an oceanic whitetip shark. Photo: NOAA Office of Ocean Exploration and Research, 2017 Laulima O Ka Moana.

Johnston Atoll is an ancient atoll (probably one of the oldest in the Pacific Ocean) and is comprised of Johnston, Sand, North, and East Islands. It’s the northernmost point of the Line Islands archipelago. Johnston supports at least 45 coral species, including a thriving table coral community and a dozen species found only in the Hawaiian and northern Line Islands. Large populations of seabirds, sea turtles, whales, and reef sharks are found here as well.

Part of the Line Islands chain, Palmyra Atoll and Kingman Reef are also remnants of volcanoes from some 65–120 million years ago. Kingman is the most undisturbed coral reef within the United States, complete with a greater proportion of apex predators (sharks and jacks) than any other studied coral reef ecosystem in the Pacific. Palmyra Atoll, which consists of about 50 islets and a few lagoons, supports breeding populations of 11 species of seabirds, including one of the largest red-footed booby colonies in the world and the largest black noddy colony in the Central Pacific.

Many nationally and internationally threatened, endangered, and depleted species thrive at Palmyra and Kingman, including sea turtles, pearl oysters, giant clams, reef sharks, coconut crabs, fishes, and dolphins. Both Palmyra Atoll and Kingman Reef support higher levels of coral diversity (180–190 species) than any other atoll or reef island in the central Pacific. 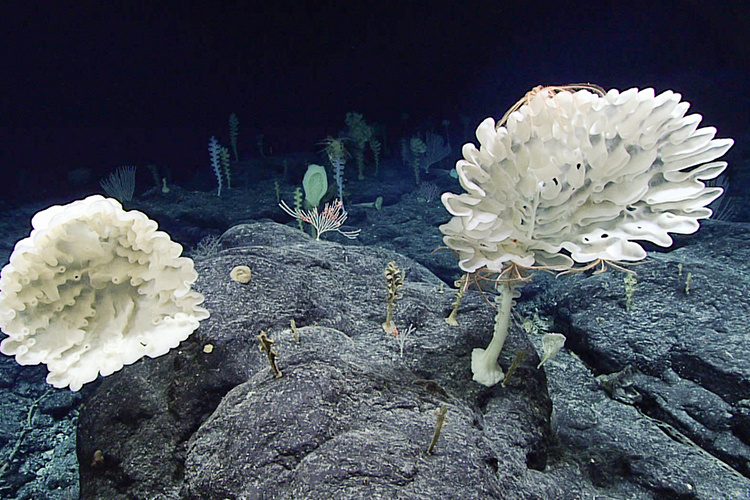 Farreid glass sponges are visible in the foreground of this fairly high-density sponge community found at about 2,360 meters (7,740 feet) depth. Corals were also present, but in lower abundance. Iridogorgia and bamboo coral are in the background. Photo: NOAA Office of Ocean Exploration and Research, 2017 Laulima O Ka Moana.

Made up of Wake, Wilkes, and Peale Islands, Wake Atoll is the northernmost atoll in the Marshall Islands geological ridge and perhaps the oldest living atoll in the world. In addition to being an active U.S. Air Force airfield, the atoll provides important seabird and migratory shorebird habitat, as well as vibrant coral reefs that support large populations of fishes in the monument waters. More than 300 fish species and 100 coral species thrive on the shallow coral reefs, along with giant clams, marine turtles, and spinner dolphins.

Howland, Baker, and Jarvis Islands hug the Equator and were formed as fringing reefs around small islands built by volcanoes some 65–120 million years ago. They support grasses adapted to the arid climate at the Equator and host colonies of 15 different breeding seabird species, some with population sizes of international significance.

Beyond the shallow fringing reefs and terraces, the slopes of the extinct volcanoes drop off sharply to the deep floor of the equatorial Pacific Ocean. Here, counter currents create localized, nutrient-rich upwelling in the shallows near the islands that result in high fish biomasses. These remote and rarely visited reefs are characterized by a large proportion of apex predators in the fish community; giant clams, sharks, and sea turtles are also abundant.

As pristine and beautiful as these islands may be, they’re not free from climate change, ocean acidification, and other anthropogenic (human-caused) effects. NOAA and partnering scientists have documented a mass coral bleaching event at Jarvis Island with an estimated 90–95 percent coral mortality (documented in May 2016). Efforts continue to assess the ecological impacts and recovery of this coral bleaching event, which was associated with the 2014 and 2015 El Niño event.

NOAA and the U.S. Fish and Wildlife Service are working to prepare a Monument management plan that addresses climate change and all threats to the ecosystem and integrates management and conservation of the National Wildlife Refuges located within the Marine National Monument at each of the Pacific Remote Islands.

The islands afford unique opportunities to conduct climate change research at the equator; far from population centers. The coral skeletons there have recorded the earth's climatic history for millennia. The Pacific Remote Islands contain some of the most pristine coral reefs in the Pacific Ocean and Monument status ensures these special areas are conserved.