The contribution should include the following:

Tables and figures must be numbered and should be referred to as Table l or Fig. 1 etc. All original figures should be in a finished form ready for reproduction and should be at a resolution of at least 300 dpi. Photographs should demonstrate strong contrasts. Each figure should have a short, precise legend or caption.

Pictures, scans and photos are to be included in JPEG format.

Charts and graphs are to be included in GIF format.

Intensification of aquaculture production has caused environmental deterioration associated with water and sediment eutrophication, resulting in sporadic mass fish kills in some parts of the world. In contrast, eutrophication has been reduced in coastal waters of Japan because of diminished production and improved feeding efficiency of finfish aquaculture and/or mitigation efforts that regulate the allowable amount of terrestrial nitrogen/phosphorus discharge to the sea. Red seabream, Pagrus major, aquaculture production, for instance, peaked in the early 1990s and has been in a decreasing trend since 2000 in Japan. The levels of surface dissolved inorganic nitrogen (DIN) have gradually decreased, while phosphorus levels have been rather constant in Ise Bay since the 1990s, possibly causing a nutrient imbalance for primary production. Surface chlorophyll a levels have been in a decreasing trend since the 1990s, and the occurrence frequency of harmful algal bloom has decreased by 90% since 1979 in Ise Bay. The oligotrophication (relative to the past) of coastal waters is considered to have brought about a decline in carrying capacity of the coastal environment, causing in part a continuous decrease in some coastal fishery resources and reduced productivity in molluscan and algal aquaculture. The national production of the Manila clam, Ruditapes philippinarum, for example, has continuously declined for thirty years, falling below 10% of the peak value marked in the mid-1980s. In Ariake Bay, DIN deficiency causes bleaching of cultured nori, Pyropia yezoensis, severely reducing the market value especially towards the end of the culture season in early spring. Integrated multi-trophic aquaculture (IMTA) is an aquaculture approach that combines culture of economically important species from different trophic levels, typically finfish, organic extractive species (e.g. bivalve) and inorganic extractive species (e.g. seaweed). Along with reinforcement of economic stability, one of the important goals of IMTA is to mitigate effluent load from finfish culture for environmental integrity. In contrast, we are trying to develop techniques to use IMTA to compensate for the reduced aquaculture productivity of bivalves and seaweeds associated with the coastal oligotrophication. The amount of NH4+-N excretion from the red seabream aquaculture in Hasamaura Cove, Mie Prefecture was estimated to be 9.2 t/year. The amount of nitrogen extracted by green alga, Monostroma nitidum (Japanese common name is Hitoegusa) aquaculture in the cove was estimated to be 2.9% of the red seabream NH4+-N excretion. M. nitidum was found to have twice as high a nitrogen content in Hasamaura Cove than those cultured in nearby bays without finfish aquaculture. The red seabream NH4+-N excretion is equivalent to the amount of nitrogen in 2071 t/year (wet weight) of the Manila clam suspended culture production. Thus, IMTA has a big potential to enhance aquaculture production by using what would otherwise be fish waste.

An annotated bibliography with 3-5 key references on the topic of your symposium presentation along with your abstract is required prior to the meeting. These annotated bibliographies replace the literature exchange previously done by UJNR. The goal is to focus the exchange of literature citations on the Science Symposium topic and to allow for experts in the field to highlight key papers from each country to assist their counterparts to explore in more detail references specific to individual presentation topics. This will be especially helpful to the U.S. members as much of the literature published in Japanese is difficult for U.S. researchers to access or understand. Your annotated bibliography of key references will be published with your minipaper in the Symposium Proceedings.

The annotations for the 3-5 references that the author considers key works in the field should provide a brief description of the work, the results and the reasons why the author considers it a key work. Key works should relate to the topic of your presentation and could be your own work or that of other scientists. When possible, key works should be from your own country. An example is given below to aid in formatting. Reprints or links to key papers would be appreciated, but are not absolutely necessary.

This is one of the first papers on IMTA (referred to as integrated culture) combining salmon cage culture and Porphyra (currently Pyropia) species culture to alleviate the seasonal nutrient depletion by using the significant loading of salmon farms, which is then valued (wastes become fertilizers) and managed (competition for nutrients between desirable algal crops and problem species associated with severe disturbances). The development of integrated aquaculture systems is a positive initiative for optimizing the efficiency of aquaculture operations, while maintaining the health of coastal waters. 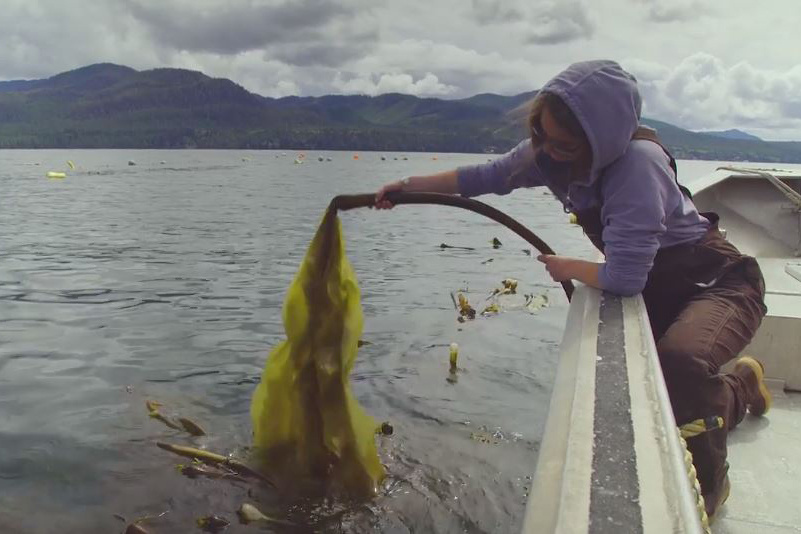 FishWatch: Learn About the Seafood You Love