IB 20-32: NMFS Reports a Vessel-Strike Mortality of an Alaska-Breeding Population Steller's Eider in the BSAI

Notice of vessel-strike mortality of a Steller's eider in the Bering Sea.

The National Marine Fisheries Service (NMFS) reports the mortality of a Steller’s eider as the result of striking a vessel in the trawl groundfish fishery of the Bering Sea/Aleutian Islands Management Area (BSAI), according to James W. Balsiger, Administrator, Alaska Region, NMFS. The event occurred on March 2, 2020 near Cape Krenitzin, just north of False Pass in NMFS reporting area 509 (see Figure 1). The vessel strike occurred at night while the vessel was in transit. The vessel strike was recorded on the vessel’s electronic monitoring system and the mortality was reported by the vessel captain to the U.S. Fish and Wildlife Service (USFWS). This Steller’s eider is considered to be from the Alaska-breeding population, which is listed as “threatened” under the Endangered Species Act (ESA). This is the first recorded take of a Steller’s eider considered to be from the Alaska-breeding population by any fisheries operating in the BSAI or Gulf of Alaska Management Area (GOA). 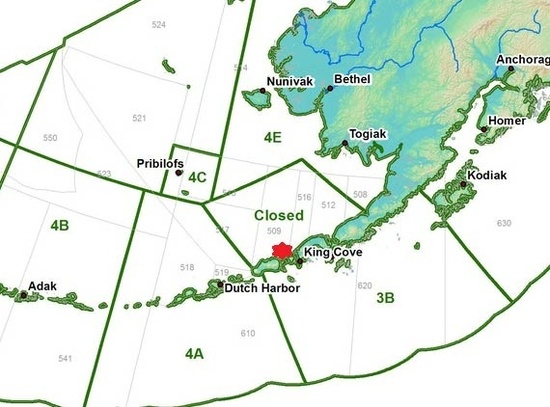 The NMFS Alaska Regional Office, NMFS Alaska Fisheries Science Center, and the USFWS are actively coordinating efforts and communicating in response to this mortality event and are complying to the fullest extent with ESA requirements to protect this species.

To assist in this coordinated effort, NMFS suggests that vessels transiting and fishing in reporting areas near 509 use extra caution by avoiding areas of large seabird congregations and by minimizing the use of external lighting at night. Steller’s eider are believed to be attracted to brightly lit vessels in the dark. NMFS encourages vessel operators to consider not deploying gear amidst congregations of threatened and endangered birds; if possible, move on to a location where Steller’s eider are not present.

While this mortality event did not occur during fishing activities, NMFS reminds operators of hook-and-line vessels in the BSAI and GOA that they are required to employ multiple seabird avoidance measures, such as streamer lines, under fishery regulations pursuant to the Magnuson-Stevens Fisheries Conservation and Management Act.

NOAA Fisheries also reminds vessel operators that any Alaska-breeding population Steller’s eider or other ESA-listed seabird found injured or dead on board, or caught by hook-and-line gear, should be retained and reported immediately to NMFS (1-800-853-1964 or 907-586-7228) or the NMFS observer onboard. Learn more about seabird avoidance measures.