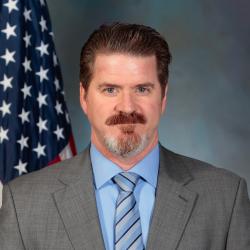 Everett Baxter serves as the Deputy Director of NOAA Fisheries’ Office of Law Enforcement.  He joined NOAA in October 2001. He previously spent more than 13 years on active duty with the U.S. Coast Guard, eventually retiring from the Coast Guard Reserve as a Command Master Chief with just over 30 years of service. He served aboard patrol boats, as a Special Agent with the Coast Guard Investigative Service, and as an instructor at the Maritime Law Enforcement Academy. He has a B.A. in Criminology from Saint Leo University.