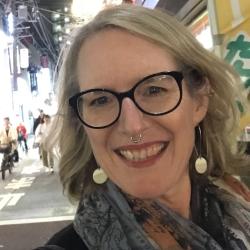 Libby graduated from Stanford University in 1988 with a degree in Biological Sciences. She earned her PhD from University of California Irvine in 1997, where she studied the at-sea foraging distribution of North Pacific seabirds. She came to NOAA Fisheries Alaska Fisheries Science Center (AFSC) in 2001. For 15 years, she was lead of the Fishery Interaction Team, studying the effects of commercial fishing on Steller sea lion prey fields. She is now Program Supervisor in the joint AFSC and Pacific Marine Environmental Laboratory Ecosystems and Fisheries-Oceanography Coordinated Investigations Program (EcoFOCI). She has lead surveys in the Beaufort and Chukchi seas. A common theme throughout her research career has been fisheries (or seabird) oceanography and habitat use. She is active in the promotion of Ecosystem-Based Management nationally and internationally through her involvement with the Arctic Council, the North Pacific Marine Science Organization (PICES) and the International Council for the Exploration of the Sea (ICES).