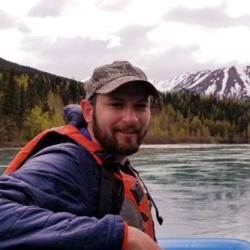 Wes received his BS from the University of California-Santa Cruz and his PhD from the University of Washington. His PhD focused on applying genomic tools to study local adaptations and inform management of Pacific salmon in Alaska. In particular, he investigated genomic differentiation of Chinook salmon from western Alaska and genetic divergence of different ecotypes of sockeye salmon in Bristol Bay. More recently, Wes was the Assistant Unit Leader of the USGS Wisconsin Cooperative Fishery Research Unit, where he led a genetics research program in Wisconsin with the goal of conducting research to inform fisheries management. Some highlights of his research in Wisconsin include exploring the utility of eDNA metabarcoding for diversity assessments, using parentage analysis to investigate mating strategies and reproductive success, and developing high-throughput genomic tools to conduct genetic stock identification for Great Lakes fisheries.

Wes grew up around the ocean in San Diego, CA. During his childhood, he fished, snorkeled, kayaked, and generally spent as much time around the ocean as possible. As a teenager, he worked as a deckhand on sportfishing boat where he was exposed to the concepts of harvest regulation and sustainable fisheries management. Wes studied marine biology during his undergrad at UC-Santa Cruz and spent his free time scuba diving and spear fishing in Monterey. During his PhD, Wes was fortunate enough to spend parts of five summers in Bristol Bay where he formed a deep connection to the incredible fisheries resources in the Bay and to Alaska in general.

Wes’ research interests include all things ‘omics with a focus on population genomics, genetic stock identification, and developing metabarcoding tools for eDNA and mixed-DNA sample applications.