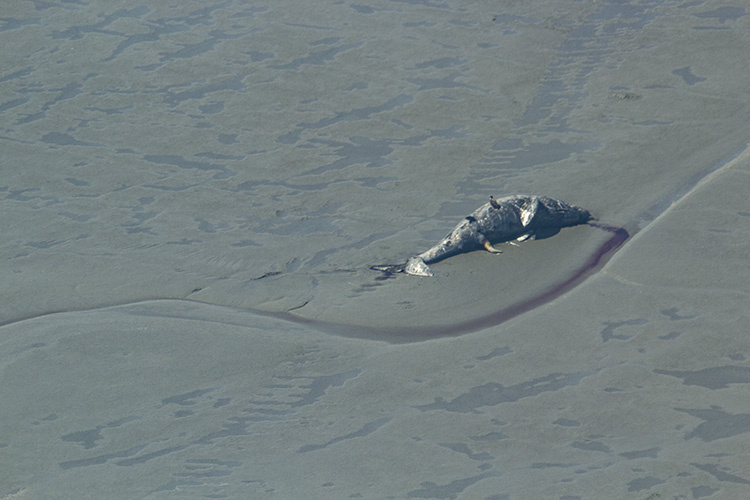 A stranded gray whale found in upper Cook Inlet, near the mouth of the Theodore River. Credit: AVPS/Natalie Rouse

The gray whale that was first reported in Twentymile River near Girdwood, Alaska on Memorial Day has likely died. It had lingered in the river for more than a week before swimming back into Turnagain Arm, but it never made it down Cook Inlet back to the Gulf of Alaska.

NOAA Fisheries received a report on Friday, June 12 that a large dead whale was sighted from the air. It was spotted at the mouth of the Theodore River, near the Susitna River.

“We hoped for the best, but expected the worst given the poor condition of the gray whale when it left the Twentymile River,” said NOAA Fisheries Biologist Barbara Mahoney. “After considering the challenges of Turnagain Arm’s currents and tides, it is unlikely that two gray whales would strand in upper Cook Inlet in the same time period. We have determined that the dead gray whale by Susitna River is likely the same one from Twentymile River.”

An examination of the photographs determined the gray whale was male. 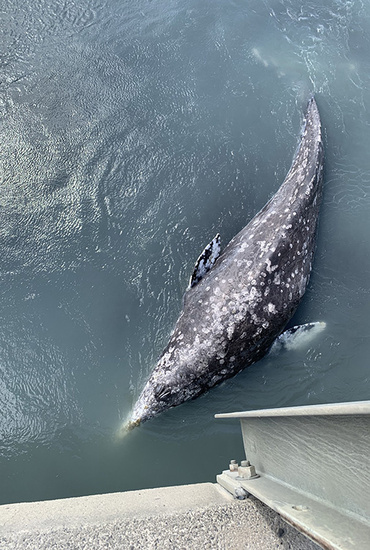 NOAA Fisheries monitored a gray whale in the Twentymile River near Girdwood, Alaska until it was able to free itself and swim back into Turnagain Arm. Credit: NOAA/Barbara Mahoney

A fisherman first reported the gray whale on Memorial Day. Twentymile River is popular for fishing, including opportunities in May to catch eulachon, a small, oily fish also referred to as hooligan or candlefish.

The fisherman told NOAA Fisheries a whale was in the Twentymile River, about a mile upstream of the Seward Highway Bridge. He shared a video of the whale with NOAA, and agency staff confirmed it was a gray whale.

That evening, NOAA partners took a boat upriver to monitor and photograph the whale. They found the 27-30 foot long animal swimming in a 200 yard loop along the cut bank, where the water was deepest.  A shallow area downstream of the whale and decreasing tides prevented it from swimming downriver.

NOAA continued to monitor the whale’s behavior and condition. It looked like the whale’s best opportunity to swim downriver and into Turnagain Arm would be on Wednesday, June 3. The high tide that day was expected to increase to more than 30 feet.

On the morning tide of June 2, the whale moved downriver about 300 yards to the mouth of Twentymile River with the higher tide. It found a deep pool of water. NOAA Fisheries collaborated with the State of Alaska Unmanned Aerial System Program to collect aerial video of the whale from a drone. The drone video allowed agency biologists to assess the behavior and body condition of the whale and identify important river features downriver of the whale.

Later that day, Andy Morrison, with Alaska Backcountry Access, boated to an area near where the whale was swimming to allow UAS Drone Operator Ryan Marlow access.

Marlow used a drone to film the whale. He also used a device known as a “snotbot” to collect breaths from the whale. He collected eight samples that will be analyzed to better understand the whale’s health.

The following morning, June 3, NOAA Fisheries heard that the gray whale swam under the bridges, close to Turnagain Arm. However, he turned back upriver and became stuck in shallow water next to the Seward Highway Bridge. With the rising tide that evening, the whale was able to free itself, turn around to face downriver, and swim into Turnagain Arm.

Based on the photos and video collected of the whale, veterinarians determined the whale was in fair to poor condition.

NOAA received another report that the gray whale stranded in Turnagain Arm during low tide at Ingram Creek. Many volunteers looked for the whale along the Seward Highway over the next few days. An aerial survey of Turnagain Arm on June 5 found no sign of the whale.

The fate of the gray whale from the Twentymile River event was unknown until the June 12. That was when we received a report of a large dead whale at the mouth of the Theodore River. It was first seen and photographed on June 11.

This gray whale is among 12 dead gray whales confirmed in Alaska this year. The Gray Whale Unusual Mortality Event, declared May 2019, continues along the west coast of North America, from Mexico through Alaska.

“Although the number of gray whale strandings along the west coast is lower this year relative to 2019, the number of dead gray whales in Alaska is slightly higher than the seven whales confirmed last year at this time,” said NOAA Fisheries veterinarian Kate Savage. “Our total in Alaska for 2019 was 48 confirmed dead gray whales, and we are collaborating with coastal communities to track stranded gray whales this year. We hope not to reach or exceed that number in 2020.” 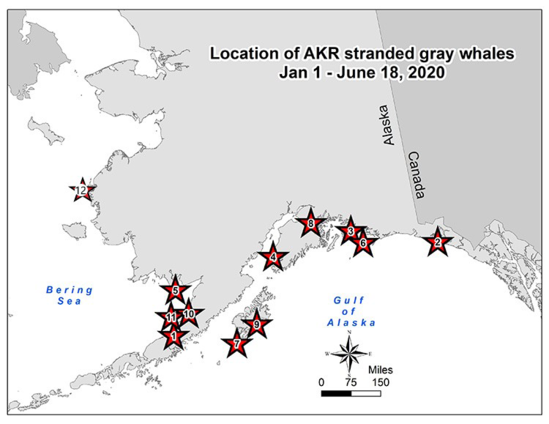 We want to remind the public to not approach within 100 yards of marine mammals. Drones should be flown at least 1,000 feet from marine mammals. If you see an injured, entangled, or dead marine mammal, immediately call NOAA Fisheries Alaska Statewide Marine Mammal Stranding Network hotline at 877-925-7773.

Age and Growth Homework: Determining How Old Fish Are